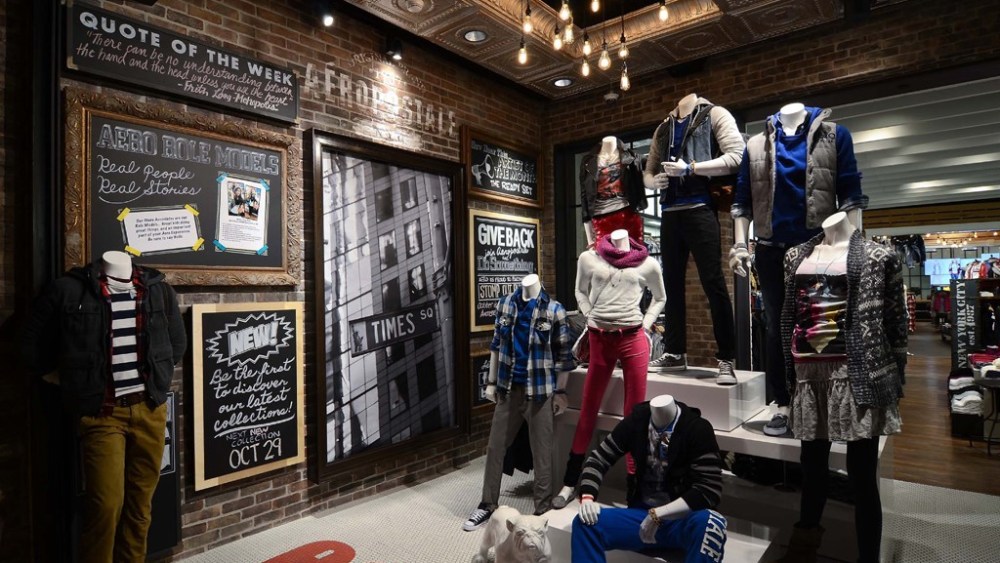 NEW YORK — Aéropostale was set to unveil today at the Roosevelt Field Mall in Garden City, N.Y., a 4,400-square-foot, high-tech retail prototype that will carry the chain’s store fleet forward in the coming years.

“This is definitely our new store design,” said Mary Jo Pile, executive vice president of customer engagement at the teen retailer. “There probably will be elements we ramp up and others we edit,” as the prototype is rolled out.

Aéropostale, which had a slow start to the back-to-school season, is hoping to get customers to stay longer in stores. As teens spend more time in the stores, the company sees “an increase in conversion rates and dollars spent,” Piles said. “We’re adding a unique element of fun. Our mantra was, it has to be simple, it has to be easy and it has to work. The technology we integrated adds to the service element. Shoppers will be able to access our e-commerce site [in the store] and we’ll be able to show more sizes and online exclusives.”

“It’s extremely important for us to showcase the Aéropostale brand through our new store design while continuing to offer our customers exciting fashion in a warm and inviting environment,” said Tom Johnson, chief executive officer of Aéropostale.

Aéropostale’s objective was to build an emotional connection with consumers. The store’s technology-enabled features include a modern jukebox where teens can vote for the music played in the store, iPods in fitting rooms to indulge personal tastes in music and Apple desktops and iPads for scanning products and reading reviews. IPads also have a build-your-own-outfit guide that shoppers can use on their own or with the help of a salesperson.

The company was sensitive to the comfort and concerns of female shoppers, creating a private fitting room area behind the video screens. “When you have a co-ed store, a girl wants her own area where she can shop for things without being so exposed,” Pile said. “We did a tromp l’oeil effect in the girls’ area. Each fitting room is themed differently; there’s one for the actress, photographer, dancer, etc. We would love to integrate this into our store design going forward.” Aéropostale also expanded its shoe assortment, yoga and dormwear and accessories.

The store’s high-tech elements are juxtaposed with pressed tin ceilings, exposed brick walls, reclaimed wood accents and the virtues of the company’s old-fashioned values. “We have seen that charity clearly is an important component of many teens’ lives,” Johnson said. “In order to support the interests of our teen customers, we began Teens for Jeans five years ago. Our Teens for Jeans program has been incredibly successful, with more than 2.5 million pairs of jeans collected to date. We have also been receiving outstanding feedback on our new Stomp Out Bullying partnership, which is currently running in our stores.”

“I’m proud that we were able to articulate our culture and values in the store design,” Pile said. “We took a whole glass wall and put up seven chalkboards and we’re calling it The Community Wall. The Dream Big board refers to our own scholarship program, Role Models features a different associate every month and Give Back has information for teens who want to give back.” There’s also an inspirational quote. For October, Anti-Bullying Month, it’s Lady Gaga’s, “Don’t you ever let a soul in the world tell you that you can’t be exactly who you are.”

Aéropostale, which is sponsoring the Z-100 Jingle Ball for the second year, will feature a performance from The Wanted today at its Times Square flagship. The concert will be Webcast to the Roosevelt Field store. In addition, the Jingle Ball artist lineup will be announced live from Aéropostale in Times Square.