The store's programming is informed by the founders' wide-ranging interests.

Swedish contemporary brand Axel Arigato has opened its largest store, a two-level, 3,000-square-foot flagship at Pilestræde 16, 1112 Copenhagen, the brand’s third location. In September, Axel Arigato will unveil a shop at Nordiska Kompaniet, the luxury department story on the city’s Hamngatan.

The brand eschews traditional seasonal collections. Instead it drops a new style every week and in response to market demands.

“Opening other stores is definitely part of our strategy,” said cofounder and creative director Max Svardh. “The U.S. was our biggest market in our first year. We have a steady customer base, especially in Los Angeles, New York and Miami. We’ll open a store in the U.S. in the future for sure. At this stage, we’re focusing on Europe.”

Set inside a historic building, the interior design of the Copenhagen store blends brutalism with minimalism to create an unusual and unexpected  environment. An enormous and elaborate raw concrete staircase represents form and function; with steps in different directions, there’s more than one way to travel between the unit’s two levels, and the structure is used to display products and art.

Accents of light blue and acid green contrast with the gray palette of smooth raw concrete, and cloud-like installation podiums. Made from jesmonite and dipped in high gloss lacquer, the displays take sneaker worship to new heights, presenting the shoes as if they were works of art in a gallery. “We used few elements, but really strong ones,” Svardh said. “The whole idea was to portray this type of gallery feeling. Instead of having walls filled with shoes, we present products on podiums in a special way. We try not to use the walls at all. We like to have them super clean.” 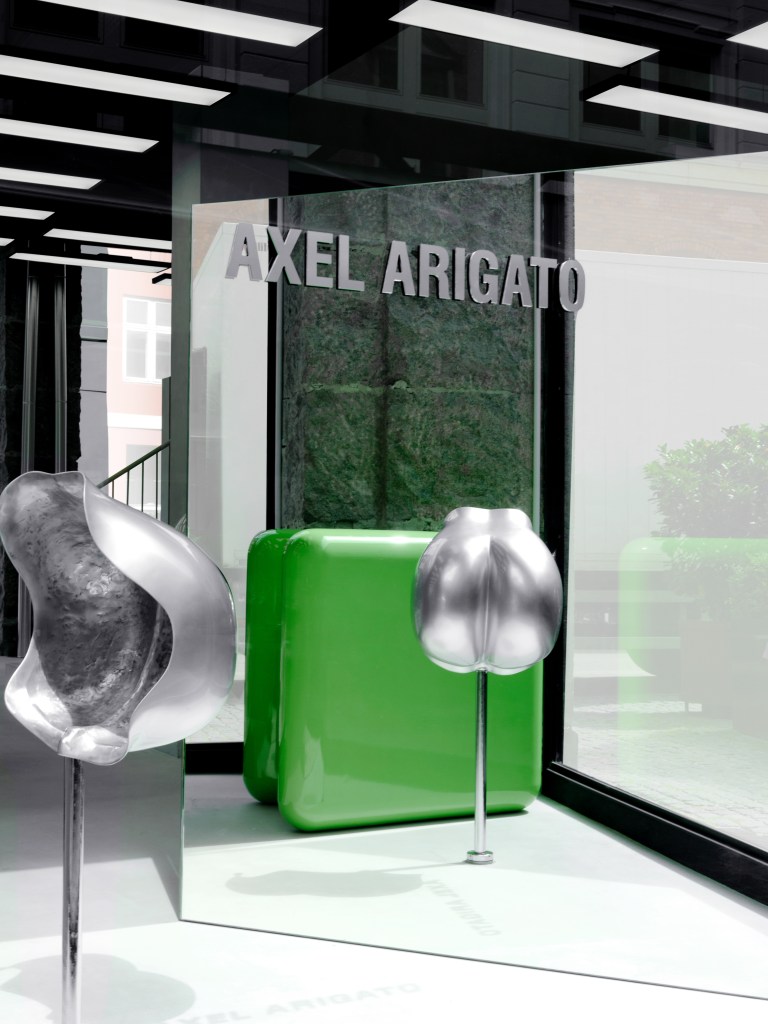 Life-size sculpture #SilverDerriere was commissioned for the space.

Svardh designed the store with Stockholm architect Christian Halleröd using the visual sleight of hand of floor-to-ceiling mirrors to enlarge the space and elevate the immersive experience. Artist Kiri-Una Brito Meumann’s “#SilverDerrier,” sculpture of life-size buttocks is designed to encourage interaction. “It’s a silver-plated bum that you can actually put your bum inside,” Svardh said. “There’s a mirror so you can take a selfie.”

Svardh said of equal important as the aesthetics of the store is the shopping experience. “Our stores are so much more than places to transact,” he said. “We have an events team at our headquarters. We surround ourselves with everything that we like: music, artists, exhibitions and poetry, big artists and small artists.” 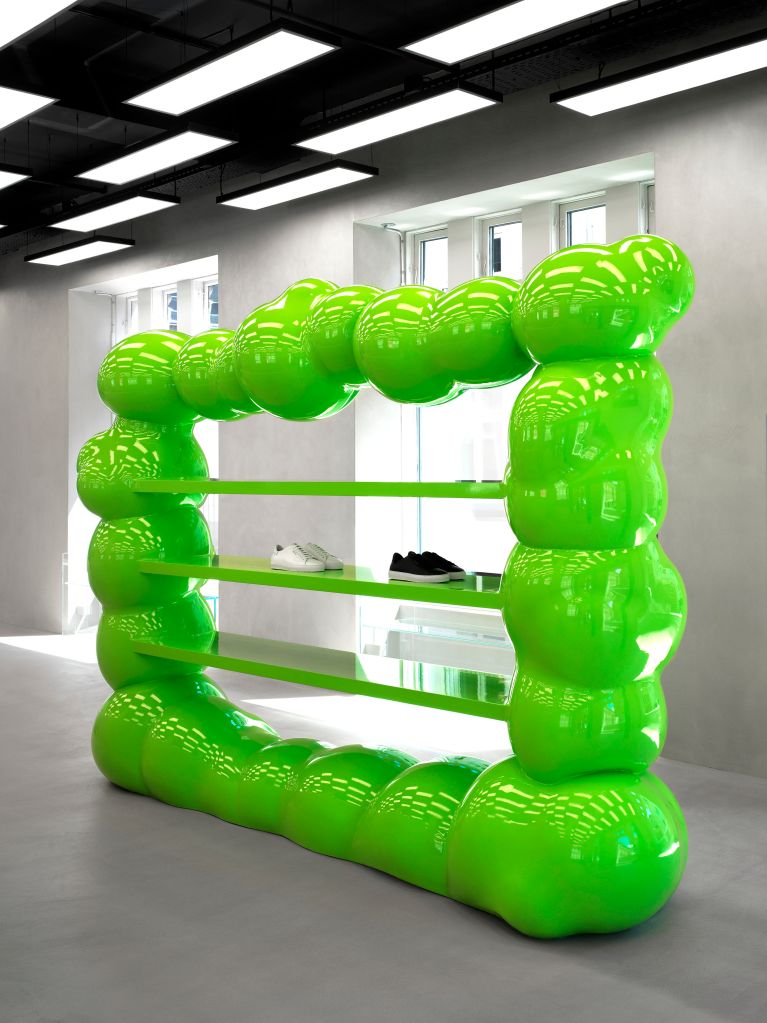 A neon display pops amid the store’s gray palette.

Launched in 2014 as a direct-to-consumer label, Svardh said, “We sold on Instagram from day one. That allowed us to reach a global audience. On our first day, we sold to 14 countries. At the end of our first year, we were approached by some international retailers. We opened up distribution to a few retailers and opened our first store in London’s SoHo three years ago.”

Axel Arigato’s product range has grown in a similar organic fashion. What began as a men’s sneaker collection has expanded to include accessories, bags, backpacks, small leather goods and apparel. “When we started, we had a wide selection of men’s sneakers,” Svardh said. “We saw that all the smaller sizes were sold out, so we introduced women’s. We wanted to have something for every customer.

“Stores have always been a key ingredient for us,” Svardh said. “We’ve always had our eyes on opening stores. For us, that’s the only way of showing our true DNA.”