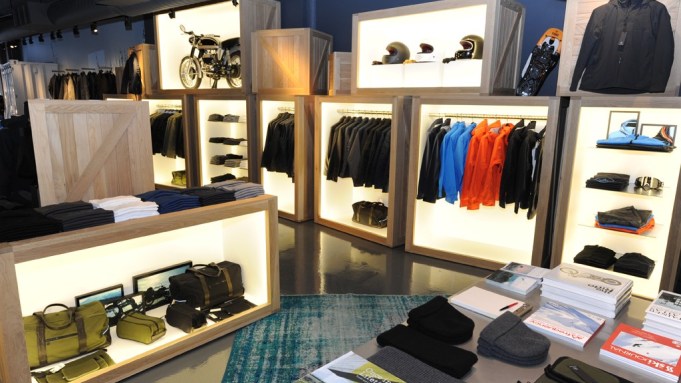 “We’ve been looking for a location in New York for 18 months. This is our number-one market on our e-commerce site,” said Jonah Smith, who cofounded Aether in 2009 with partner Palmer West. The Los Angeles-based brand is known for its technically advanced performance outerwear and sportswear, designed with clean, modern lines and minimal decorative distractions.

The SoHo store, conceived by France-based designer Thierry Gaugain, has an industrial feel, with concrete floors and airy ceilings with exposed pipes, all painted gray. The loft-chic look is counterbalanced with framed installations of crisp nature photography and a rear wall constructed of hundreds of logs, rustically stacked 16 feet high.

A modular merchandise display system is comprised of 34 custom-made crates in white oak, with laminated interiors that are lit from within to spotlight Aether’s lightweight down jackets, technical shells and active sportswear. “They’re adult retail Legos,” said West of the easily moveable boxes.

That theme is highlighted by a Ski Doo snowmobile ensconced in the front window, accompanied by a gleaming Bultaco motorcycle, Viks bicycle and Oru kayak spotlighted inside.

Both the New York and San Francisco stores are meant to boost the visibility of the Aether brand and its online sales, as much as to generate retail sales. While the San Francisco store has only 300 square feet of selling space, its presence has dramatically boosted e-commerce in the Bay Area, said Smith.

Aetherapparel.com accounts for 85 percent of total brand sales, of which 65 percent are in men’s and 35 percent in women’s. The company has dramatically cut back on its wholesale efforts, with just 20 retailers carrying the brand, down from about 100 two years ago.

That pullback is part of Aether’s strategy of emphasizing direct-to-consumer channels. “Our product is very clean. Our value is in the construction and quality rather than the splash. So you need to have someone present it to the customer and explain what separates Aether from the rest of the options out there,” explained Smith, who said the company has doubled its inventory investment this year over last year.

The SoHo store, which was previously a Vespa dealership, is adjacent to the Mondrian SoHo Hotel and retail neighbors include Jil Sander, Saturdays Surf, Bonobos, Maiyet and Laicale. “It’s close to the heart of SoHo without being in the center of it. New Yorkers know where it is, but it doesn’t get too clogged with tourists,” said West of the Crosby Street location.