NEW YORK — For every minute that a traveler spends waiting to board her plane, she could be shopping. And airport operators, retailers and even mall developers are trying harder to capture her attention.

“With few exceptions, any... 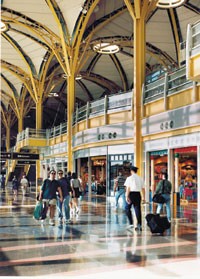 NEW YORK — For every minute that a traveler spends waiting to board her plane, she could be shopping. And airport operators, retailers and even mall developers are trying harder to capture her attention.

“With few exceptions, any retailer who targets a high-end shopping center would succeed in an airport, if positioned correctly,” said George Giaquinto, vice president of Westfield Concession Management Inc., the airport division of the international mall developer. “The demographic in our airports is as good if not better than any other high-end shopping center.”

Giaquinto heads a small division within Westfield and holds retail development contracts at nine major airports in the U.S. The group runs its airport retail exactly as it would manage one of its shopping centers: It handles all of the leasing, marketing, management, buildout and, when possible, as with the Delta Airlines terminal at Boston Logan International Airport, the design and development of the space. It’s one of a few real estate-specific companies in on the business now, but that may be changing as other mall developers look for new audiences.

Airport retail space has traditionally been an afterthought for developers and airline carriers. Typically, shops and restaurants were tucked into whatever empty, oddly shaped corners that were left after security terminals and concourses were built. But as luxury spending continues to ramp up and airport dwell time — the amount of spare time a passenger has between passing security and boarding the plane — grows due to security requirements, the captive, high-income shopper in both domestic and international terminals becomes a hard-to-ignore opportunity.

The numbers are impressive. Sales per square foot in airport retail commonly top $1,000, while sales per enplanement (per departing passenger) can top $15. Shopping isn’t exclusive to travelers, either — a major airport can employ anywhere from 10,000 to 45,000 people on a daily basis.

Currently, the majority of U.S. airport retail not managed by the airports themselves is managed by HMSHost Corp., a “master concessionaire” that builds and operates all of the concessions, rather than leasing space for a retailer to operate. HMSHost runs 71 airports worldwide. By comparison, only about a dozen airports in the U.S. use a real estate developer model, with Westfield, BAA USA Inc. and Marketplace Development as the three major players in that field.

“We continue to see airports improve their programs across the board,” said Mark Knight, regional director of BAA USA, an affiliate of BAA plc, an airport company best known for its top-grossing retail sales at Heathrow Airport in London and the first to bring a comprehensive retail model to the U.S. at the Pittsburgh International Airport. “Historically, airport retail has been very disjointed, but we believe in the right space with the right adjacencies and traffic. Airports are starting to understand that, too.”

Airports and even some airlines are pushing for more thoughtful — and profitable — retail in their terminals, with fully developed concourses, retail destinations and better casual restaurants, such as Wolfgang Puck cafes and Legal Seafood.

“The key is the experience,” said Steve McGowan, vice president and creative director of FRCH, an architecture firm with several airport retail projects.  “Airports are starting to make shopping an extension of the vacation or a real break from a business trip.”

For example, eclectic retailers like Betsey Johnson or MAC, said McGowan, would do very well in airports because of the “can’t get it anywhere else” sentiment that travelers would have departing from a fashion city like New York or Miami. Similarly, retailers like Aveda, The Body Shop, Bath & Body Works and L’Occitane benefit from business travelers indulging in small, relaxing luxuries like a short spa treatment or beauty product at the end of a trip.

Regardless of the type of merchandise and demographics of the travelers, the key for retail success in airports is editing. Apparel, accessories and beauty retailers that can display their brand in a limited setting and space are the most profitable in airports.

“Our airports on a good day are a 10th of the size of a mall,” said Knight. “So fashion retailers really have to pare down their presentation. But if you can offer the kind of products the passengers want to buy in a convenient way, it’s an incredible opportunity.”

“Retailers are adapting to airports,” said Pat Breslin, senior managing director and head of the retail group at GVA Williams, a New York-based brokerage. “In London or Milan or Rome [airports], they have [a] high-end retail equivalent to Madison Avenue. If the displays and merchandising are done right, a woman will buy because she knows the products and the brands already.”

DKNY and Brooks Brothers are two notable apparel stores that have already made a big dent in airports, but on the whole, fashion retailers have been slow to develop an airport platform.

“They are looking for a better tenant mix, better co-tenancies and proof that the customer really is the person walking through the airlines,” said Andrew Pittel, president of New York-based retail brokerage Andrew A. Pittel & Co. “But they’re all open to it.”

Likewise, the nuts and bolts of running an airport shop can dissuade retailers.

“We spend a lot of time educating retailers as to what it means to do business here,” said Carol Fish, the commercial director at JFK IAT, the private company that developed and operates 100,000 square feet for John F. Kennedy International Airport. “It’s 365 days a year, they have to edit their selections and they have to get away from the geographic clustering that they might want on the street. But at the same time, there are delays that keep shoppers in the terminal and there is a captive audience of high-income leisure travelers with nothing else to do.”

For Fish, the formula clearly works. In July, Hermès, Salvatore Ferragamo and Ermenegildo Zegna will all open their doors at the Shops at Terminal Four, joining Hugo Boss, DKNY, Lacoste and Guess. JFK IAT is exploring adding more “impulse-related” retail near the concourses.

“It’s a slow process,” said Giaquinto. “Retailers need to match the right product with the right demographic. But we’ve started to convince them [retailers] of the opportunities….Overall, the developers need to set a quality standard. If you want to create a shopping experience you have to set the tone for it. Many airports have picked up on it, and the retailers are coming along.”