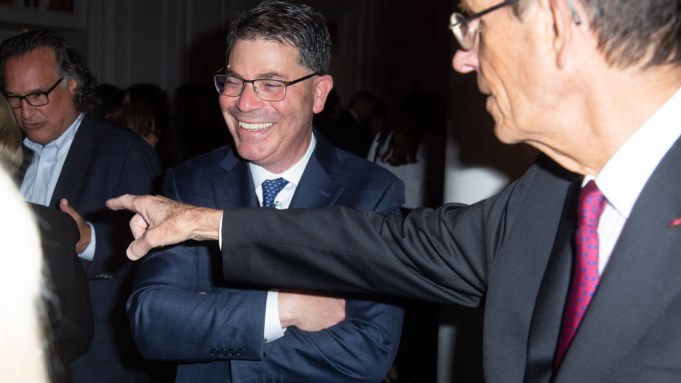 Touched by being honored, Spring recognized his mentors and supporters at Bloomingdale’s, spoke of AJC’s challenges, and got personal about his family and his religion. He said that through the years, people wondered, “’Tony, is he Jewish?’ I’ve had that all my life. I’ve always been Jewish, but I haven’t always practiced Judaism.”

When he was younger, he felt religion was an obligation, but after his wife Grace converted to Judaism, “I found myself reengaging.” He’s been to many benefits for AJC and other organizations, but “this is the first time I am on this side of the stage and I can tell you the view is quite incredible.” The crowd of 1,036 in the ballroom of the Grand Hyatt, raising $3.1 million on the evening, clearly impressed Spring.

For Rentler, the AJC event was a rare moment in the spotlight. She keeps a low profile, in keeping with her company’s corporate culture.

“If you ask Barbara to describe herself, she’d say I’m just a regular gal,” said Morris Goldfarb, ceo of G-III. Not true, Goldfarb suggested. “She’s a gifted merchant and a great leader,” and ranked as the 27th most powerful woman in the country, Goldfarb said, in presenting Rentler with her award.

“It’s so inspiring for me to continue to learn about AJC,” said Rentler, who cited what she saw as parallels between AJC and the $15 billion Ross Stores off-price chain. “Strong ethics, progressive ideas and clarity of purpose,” she said. The AJC is involved in diplomacy, fighting for human rights, supporting Israel’s security, and legislative advocacy.

“The AJC founders fully understood that the only way to truly protect Jews or any minority for that matter was to ensure the rights and freedoms of all people,” said Michael Gould, the former Bloomingdale’s ceo, who presented Spring with his award. “There is not an organization in the city, country or the world that has done more to improve Christian-Jewish relations than the AJC,” Gould added, quoting the late Cardinal John Joseph O’Connor. “We are all beneficiaries of their efforts. Anti-Semitism may begin with Jews, but it never ends there.”