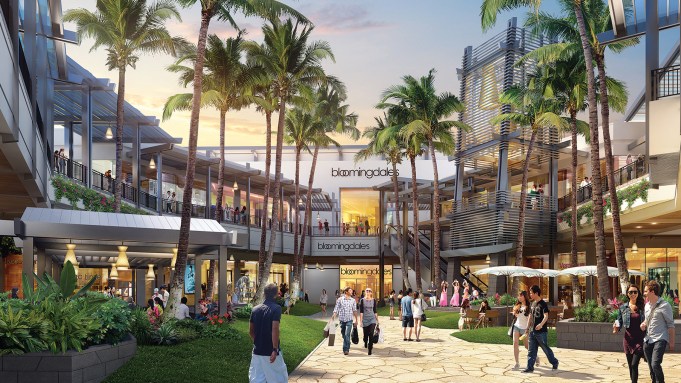 Ala Moana Center has rebuilt for the future.

Business is down amid thinner tourist traffic and the strong dollar. But Hawaii’s megacenter, owned by General Growth Properties, anticipates better days ahead, lifted by the 2.2 million-square-foot mall’s massive redevelopment and expansion project, costing $700 million.

The center awaits the arrival of a new Nordstrom anchor and specialty retail tenants in the months ahead. It’s already anchored by Neiman Marcus as well as Bloomingdale’s, which opened last November.

“Ala Moana is not only the world’s largest open-air center. It will be a mixed-used center with residential units and hotels,” said Sandeep Mathrani, chief executive officer of General Growth Properties. “This will effectively be like a city.”

The multiyear project has seen the expansion of its Ewa Wing, as well as extensive common area upgrades and a redesigned Makai Market food court. There are new tenant spaces, guest services, larger breezeways and easier access for shoppers through the street level, and a larger Centerstage event space.

The Ewa Wing of the center was redeveloped into 650,000 square feet of new retail space, including the 167,000-square-foot Bloomingdale’s; dining; entertainment; 200,000 square feet of inline retailers, and more than 1,000 additional parking stalls. Nordstrom is relocating to the Ewa Wing.

About 200 residences overlooking the ocean, with such amenities as security, a fitness club, a spa and an art walk modeled after Manhattan’s High Line, are expected to be done later this year.

The Ala Moana project reflects how in a nation filled with too many malls and stores, developers are putting more of their resources into reinventing and upgrading existing properties. GGP, a real estate investment trust, operates some of the biggest and most prominent shopping centers in the country, including Tysons Galleria in Washington D.C., Glendale Galleria in Los Angeles and Water Tower Place in Chicago.

“Our strategy is to own best in class,” said Mathrani. “It’s about densifying the best malls. There should be less malls but the better malls should be more dense.” They should become “entertainment centers,” he said.

GGP has a 75 percent equity interest in the Ala Moana center with AustralianSuper holding the remaining 25 percent. The center, valued at about $5.5 billion, is one of the largest and most productive shopping malls in the world with more than 42 million visitors a year. The center was tracking at $1,360 in sales per square foot in 2015.

“Nordstrom is putting in their newest prototype,” Mathrani said. The three-level, 186,000-square-foot Nordstrom will feature several of the same characteristics as the retailer’s Vancouver flagship.

“We will be able to bring our newest design concepts that we hope will make for a great shopping experience for both locals and visitors,” said Erik Nordstrom, copresident of Nordstrom Inc. “Ala Moana is pretty special to us — we opened in Honolulu nearly 48 years ago leasing space and running the shoe departments in Liberty House stores. We have eight employees who have been with us for more than 25 years, two of which have been with us for 40 years. Nordstrom opened its current 211,000-square-foot full-line store at Ala Moana Center in March 2008.”

“It’s got a very flexible design,” Mathrani said of the upcoming Nordstrom store. “It’s modern and light, and further enhances the merchandise for the customer. It won’t be caught up in shops-in-shops. It will have that flexibility to allow merchandise to take front-and-center stage without spending a lot of time and money to remerchandise.”

The reinvention comes at a time when tourist and mall traffic is down in Hawaii and other parts of the U.S. due to the strong dollar and economic issues in other countries, particularly China, Russia and Brazil. “We’ve been through this before,” Mathrani said. “No one open in Ala Moana is here for the short-term. People here are happy to get a position and establish themselves in the market. We’ve been through tourism changes. We’ve been through currency devaluations. Usually, it’s a 12-to-18 month process and it rebounds.”

“It’s our flagship asset. We’re not as bad as other tourist destinations,” said Mathrani.

“Ala Moana remains one of the top shopping centers in the world,” said Faith Hope Consolo, chairman of The Retail Group of Douglas Elliman Real Estate. “It kind of reminds me of Miami — very much dependent on tourists. The shoppers live for luxury, though I see the center diversifying the mix more. Sales rival top centers like the Forum Shops at Caesars — in that $1,000 range.”

According to Spring, the new Bloomingdale’s is more a matter of the business potential, rather than current demand. “We don’t worry about what isn’t. To have the opportunity to go into one of the world’s most successful open-air destinations is a tremendous benefit to our national expansion.”