Alfred Founder on Building a Lifestyle Brand Around Coffee

The company this week opened its 15th location in Palisades Village with another in Japan and two more for the Los Angeles area on its way this year.

Fifteen. That’s what Josh Zad’s Alfred — the fashionable coffee and tea concept started by a former commercial real estate executive — is now up to as far as store count with this week’s opening at Palisades Village in the Pacific Palisades.

In an age where just about any product or service can be spun into a lifestyle brand, Zad has shown that can be done with coffee in Alfred, which has enjoyed synergies with fashion and design — everyone from Rag & Bone to Kelly Wearstler — to influencers with its highly Instagrammable, stylish spaces. There appears to be no shortage of markets Zad sees the possibilities in for Alfred either. Another location in Japan is in the pipeline for August with two more coffee shops also set to come online this year in Los Angeles.

“Really early on we realized that with our location on Melrose Place, where we were sandwiched between all these fantastic, high-end retailers from Marc Jacobs to Carolina Herrera to Chloé and Vera Wang, we had a very unique, captive audience of coffee drinkers,” Zad said.

Wearstler designing coffee cup sleeves for Alfred helped its sleeve program take off and now the company has people waiting in anticipation each month for when the design resets.

Past sleeve collaborations have shown a range, from Netflix and Postmates to artist Gray Malin.

Zad in the beginning also enlisted Rag & Bone to outfit all Alfred baristas in the fashion label, which also helped catapult the brand into another sphere beyond simply trendy coffee joint. Alfred, at now 200 employees company-wide, is too big to have the coffee and tea room employees outfitted in such fashionable apparel but the p.r. in the beginning from that move certainly helped, Zad said.

The company’s recognizable “But First, Coffee.” tag line, now a registered trademark, appears in signage at every outpost. 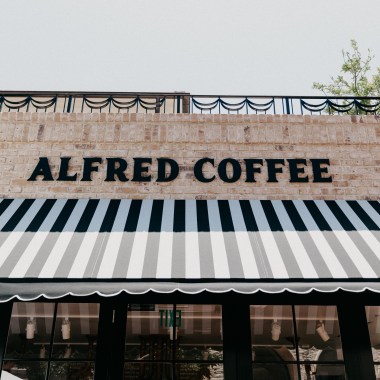 “Before I opened Alfred, I had been seeing a lot of third wave coffee shops popping up across Los Angeles,” Zad said. “But, really, those coffee shops that were opening were primarily about the craft of coffee itself: anything from where the beans were sourced to the roasting process. But what happened is they left a lot to be desired in terms of the physical presence and the decor. So I saw a definite lane I wanted to take advantage of, which was creating a coffee shop that still had great coffee, but that wasn’t the centerpiece.”

It took Zad three years before he made the move and decided to start the business. He remains sole owner and his concept has since been linked with Frame Denim, Paige Denim, Supergoop, Rimowa and Clare V. There was also a Barneys pop-up last December at the retailer’s Madison Avenue store.

And just as many are exercising restraint when it comes to opening new locations, Zad sees plenty of potential for Alfred to only get larger over time. Born and raised in Los Angeles, he said Los Angeles proper could support anywhere from 10 to 12 more locations in places such as Malibu, Santa Monica, West Los Angeles and Echo Park.

“It’s endless really. I think the beauty of the coffee shop is that it’s a very hyper local business, so that’s why you can have multiple coffee shops on the same block,” he said. “Then, add to that the fact that [drinking coffee] it’s almost a daily obsession. That’s why you still see coffee shops spring up everyday somewhere in Los Angeles.”

The first time Alfred expanded outside its hometown of Los Angeles, it took a major leap via partners in Japan that approached Zad about a growth opportunity. Two opened the same day in Japan and the fleet there is now four doors. Zad said he’s in talks with partners to expand Alfred to Europe, which could happen next year. He’s also thinking inclusively in some ways with a new concept he expects to launch for malls in secondary or even tertiary markets under the moniker But First, Coffee. The sister concept would be a much more stripped down version of Alfred’s cozy cafés that have already been proven a success, but still powered by the same company. It allows the business even greater scale and the ability to make a case for itself sandwiched between the Cinnabons and Hot Dog on a Sticks of the food court world.

Whatever the market or the concept, the key will be delivering on experience and good product, Zad. Those are the keys to any good business, he pointed out.

“You have to have something that people want to come see and touch and experience,” he said. “We build our locations to be very visceral and pleasing on the eyes, so anything from using warm materials like wood and darker colors and our But First, Coffee. neon in a unique style in each location. But you also have to have high-quality product. It’s super simple in concept, but it’s very difficult to really administer and make happen. The tendency for many is to rely on one or the other. It’s how do you keep people coming back.” 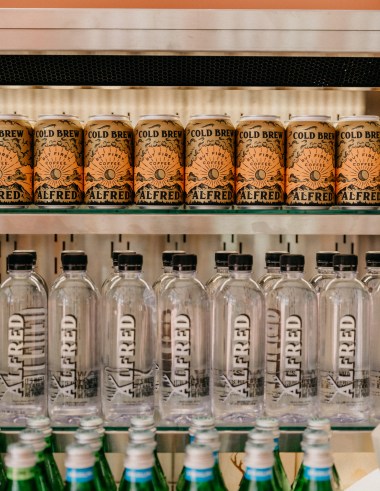