Expanding the sale in new markets outside China and innovations like live-streaming helped boost sales record.

SHANGHAI — Alibaba wrapped its Singles’ Day sale with a haul of 268.4 billion renminbi, or $38.4 billion, easily outstripping last year’s gross merchandise value record of $30.7 billion. Largely held up as a testament of consumer power in China, the world’s largest shopping event, which falls every year on Nov. 11, has also increasingly become an occasion to showcase Chinese creativity and the country’s growing influence around the world.

While the growth in GMV is not an apples-to-apples comparison — from year to year Alibaba has expanded the scope both by lengthening the pre-sales period and by launching the festival in new markets outside China; and the returns rate, while not disclosed, is understood to be high — it’s industry wisdom that many brands can make more in the one day during the sale than in a whole year.

This year’s sale was important for several reasons: It was the first held since cofounder Jack Ma stepped down. Then there were concerns the U.S.-China trade war could drag on the event as it has on national retail figures, and of overall consumer sales fatigue in what would be shopping festival’s 11th year running.

“Definitely there are a lot of sales in China, there are more every year,” said Jason Ong, Shanghai director at the firm AlixPartners. Aside from seasonal and holiday sales, there is the 618 sale, started by JD.com, and other special shopping occasions like 7/7, 8/8 and 12/12.

“Someone creates a new sale every year so there are a lot of sales,” Ong continued. “But that being said, Singles’ Day is quite unique in that it’s all platforms participating. It’s all the major brands, the majority of big names, and it’s innovative compared to the other sales that are relatively smaller. They innovate in terms of how they sell — live-streaming; what they sell — they said there are at least a million new products.”

Live-streaming was a top priority for Alibaba this year to keep consumers engaged and happily shopping. Barely an hour into the sale, the GMV Alibaba generated through live-streaming already surpassed last year’s full-day level. In the first 10 hours of the sale, over half of merchants on Tmall had used live-streaming to sell products, it said.

“For this year’s 11/11, we expanded our KOL team so we could live-stream for the full 24 hours nonstop,” said Eileen Zong, brand general manager of L’Oréal Paris. Other than showing and testing products, the beauty brand also allowed viewers to see inside the brand’s La Maison lab in Paris, where products are created to satisfy consumer’s increasing interest in transparency.

During the pre-sales period, L’Oréal Paris was also broadcasting up to 17 hours a day which attracted nearly 1 million views and increased the label’s pre-sales GMV by 700 percent over last year. 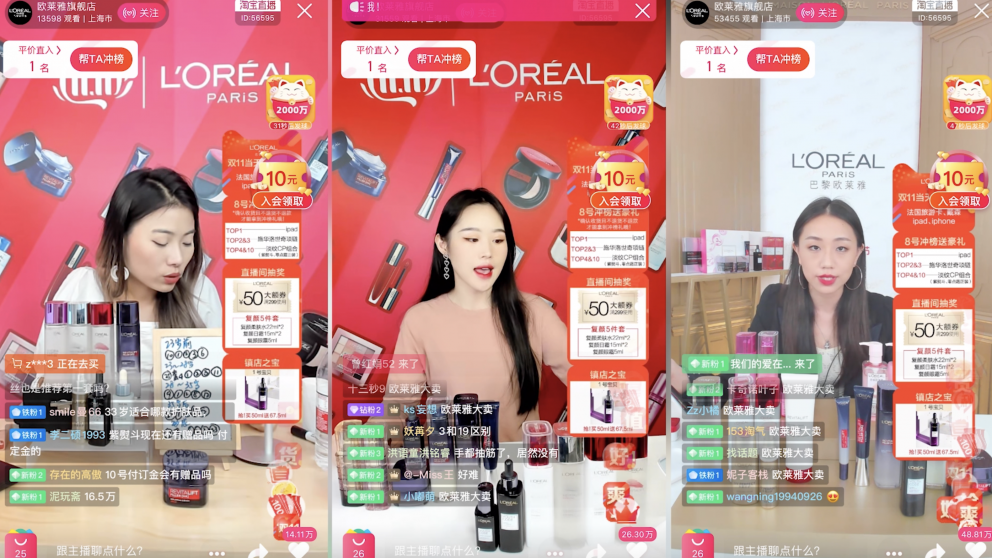 Consumers sitting in lower-tier cities in China have also been a major battle area of focus for e-commerce players. Pinduoduo, the low-cost social commerce platform, created waves when its market cap exceeded that of JD.com’s last month, making it the fourth largest tech company in the nation after Alibaba, Tencent and Baidu.

L’Oréal Paris’ Zong said the brand tailored products on their Tmall store to cater to those differences.

“We give consumers in lower-tier cities different offers than those in big cities like Shanghai and Beijing, such as more-affordable products,” she said. “These are good-quality products that were created by our sophisticated labs, but we deliver them in a way that these consumers can easily understand.”

On the Alibaba-owned Lazada marketplace, which operates across Southeast Asia, both the number of buyers and merchants for the sale more than doubled this year.