All Change at Brooks Brothers: Flagship in Flux, New Designer Near

New owners, ABG and SPARC, are negotiating with former Brooks Brothers owner Claudio Del Vecchio on the lease of the flagship, while Michael Bastian is in the running to be the designer.

A look inside the Brooks Brothers flagship that has yet to reopen.

It’s been less than three weeks since Authentic Brands Group and SPARC Group finalized their purchase of the venerable Brooks Brothers brand — and the changes are coming fast and furiously.

Next week, the team will vacate its longtime offices above and next to the Manhattan flagship at 346 Madison Avenue, and relocate to its new home: the 22nd floor of 1411 Broadway, the Fashion District location that also houses the headquarters of ABG.

In addition to the 25,000 square feet on the 22nd floor, Brooks Brothers will have showrooms that are “integrated into the ABG space” on the 20th floor, Salter said.

But the bigger question is what is happening with the Brooks Brothers flagship? The iron grates are still pulled down, there are traveling cases in the windows and mannequins are either undressed or lying on the floors. There’s a note in the window that says the store is “temporarily closed” and invites customers to shop Brooks Brothers online.

The Italian Renaissance building that houses the store is actually owned by Claudio Del Vecchio, the former owner and ceo of Brooks Brothers, which ABG and SPARC acquired out of bankruptcy earlier this summer for $325 million. SPARC is a partnership between ABG and Simon Property Group.

The fate of the Madison Avenue store “is in Claudio’s hands,” Salter said.

Questions were flying about the fate of the store as observers saw lots of action inside the still-shuttered location.

According to ABG, the inventory at that space is being packed up to support sales at stores that have been reopened as well as the e-commerce site, which is performing well. And despite the state of the flagship, ABG stressed that brick-and-mortar will continue to be a key part of the future for the brand. There are 200 Brooks Brothers stores in the U.S. and 161 have reopened so far — however, none in New York City. 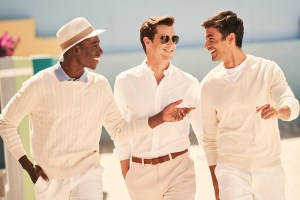 Salter said that considering how challenged traffic continues to be in New York City, it makes no sense to reopen the stores right now. “We have stores with other brands we own and they’re not performing well,” he said. “So [the Brooks Brothers stores will] stay closed until we know what’s going on. When traffic picks up, we will open New York right away.”

Salter stressed that New York City is definitely part of the go-forward plan for Brooks Brothers. The company was founded there in 1818 at Cherry and Catherine Streets and has been housed at 346 Madison Avenue since 1915.

In order to stay in that space, Salter said he’s asking for the same things from Del Vecchio that he asks of every landlord, notably rent concessions. “If we don’t get it, we’ll move down the street,” he said. “There’s plenty of real estate available in New York. We’re talking to other landlords now, but we don’t have to make a decision right away. When is traffic going to pick up in New York? Will it be this year, no. Next year, yes, when there’s a vaccine. But until then, we’ll move the inventory to where the traffic is.”

Salter is still upbeat about the prospects for his new acquisition and is closing in on hiring a designer for the collection. Reports indicate that Michael Bastian is among the front-runners, although no final decision has been made. 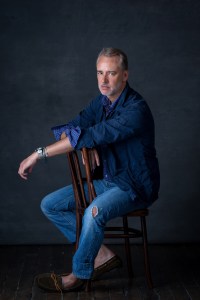 Salter acknowledged that Bastian is “on a very short list, but there’s no deal yet. He’s super talented and super commercial, but it’s not my call. I don’t get involved with that department.” In those areas, he defers to his partner Nick Woodhouse, president and chief marketing officer, he said.

In addition to a designer, Salter is close to naming a new ceo and it is expected to be an executive who currently works for ABG.

Because of his aggressiveness in buying brands and his partnership with Simon, as well as Brookfield Properties, with which he also has partnered to buy brands, ABG is always in the mix when a brand or retailer is seeking a new owner.

It was most recently rumored to be considering getting involved with J.C. Penney. Earlier this month, the bankrupt retailer agreed to sell its retail business to Simon and Brookfield for $300 million in cash and the assumption of $500 million in debt, a deal that averted a liquidation.

Although ABG was not involved in the sale, Salter said he’s been talking to the mall developers about Penney’s, but no decisions have been made. “If we want to be involved, we can be, but I’m trying to figure out what’s in it for us,” he said.

The rumors are that some of the ABG brands could fill the shelves at Penney’s, but Salter said he’d have to handle any decision with kid gloves. Although it would help expand distribution for any brand — Penney’s entered bankruptcy with more than 800 locations — “we have to be careful. We won’t just put a brand in Penney’s because of our relationship with Simon and Brookfield. Our business model is based on market segmentation, not volume. When you overdistribute, it’s a race to the bottom.

“And we have to protect our relationships with Macy’s and Dillard’s, Kohl’s and the other retailers we work with. But we own 50 brands, so there’s enough to go around,” Salter said.