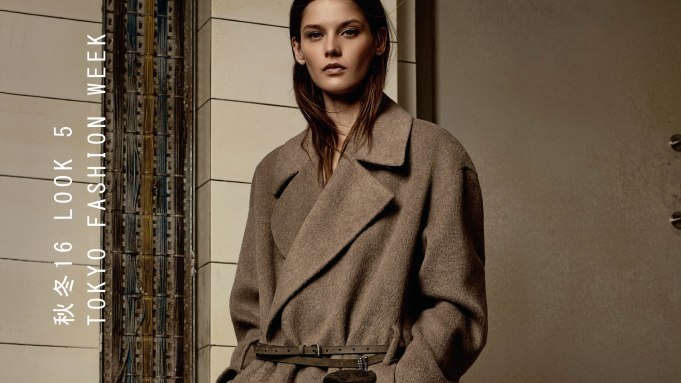 LONDON — William Kim, chief executive officer of the British contemporary brand AllSaints, isn’t thinking fast — or slow — as he aims to build a company for the year 2020 and beyond.

Instead, he’s been following — and trying to anticipate — the shopping rhythms of the AllSaints customer, who is visiting the store once a month, who buys both online and in brick-and-mortar, and who wants in-season fashion.

As AllSaints prepares to debut its fall 2016 men’s and women’s collections for the first time in Tokyo, Kim talked about his strategy for the brand that was on the verge of bankruptcy in 2011, making it a company that was once more cautionary tale than success story. The show takes place on Thursday in Minato-Ku during Tokyo Fashion Week.

“There’s a lot of heated debate now on how to buy and when to buy, but I think we as brands need to take a moment, breathe, listen to the customer — and react,” said Kim from the AllSaints headquarters near Old Spitalfields Market in east London.

He was referring to the debate du jour among fashion and luxury houses about the viability of showing in-season fashion on the runway, and to what degree brands should accommodate the end consumer.

“I care about dressing customers for the summer holiday, so we have a high summer hit. But we’ve also built a model that’s agile. So if it’s cold, we still have novelty in outerwear and chunky knits. The best thing we can do is to build a model that’s flexible and reactive to the future,” added Kim, whose background is in luxury goods. He’s worked for companies including Gucci Group and most recently Burberry, where he held a variety of titles, including senior vice president of digital.

New product drops once a month — rhyming with the frequency of customers’ in-store visits — while the design team works in 100-day cycles from sketchpad to first customer order, with about 150 new items arriving every month on the shop floor and online.

That agility is partly thanks to a vertical structure, with everything that consumers see — from the collections and photography to the shop interiors and light fixtures designed in-house and created by long-term suppliers.

So far, the strategy has been a success, with AllSaints set to post the highest sales and earnings before interest, taxes, depreciation and amortization in its 21-year history. The company is majority owned by Lion Capital, which purchased AllSaints in 2011 after it had run into trouble following a rapid-fire retail rollout under the previous owners and the collapse of its Icelandic investors.

All figures have been calculated at average exchange rates for the periods to which they refer.

The brand’s sales are split evenly between men’s and women’s wear. The design studio is located at the East London headquarters, and women’s and men’s teams work side by side. The collections are always shown together.

Half of growth comes from the U.K. and half from international sales. The U.S. is AllSaints’ second-biggest market after the U.K.

Some 99 percent of sales come from own retail, including concessions, with the remainder derived from wholesale clients including Bloomingdale’s and Nordstrom in the U.S., Selfridges in the U.K., and Shinsegae in Korea. The wholesale business comes purely from the handbag collection. Rtw distribution in department stores is a concession model.

AllSaints has recently launched bags with the Korean manufacturer Simone, and footwear was relaunched for spring 2016 with the Camuto Group.

Kim said the team, led by creative director Wil Beedle, gets its inspiration from a variety of fonts.

“We’re not going to events or to markets up the road for inspiration. Our teams have been trained to become global in perspective. The world is an all-inspiring place. We don’t look back. We are fashion. We have to continue to evoke novelty and newness,” he said.

Beedle said the touchstone for the collection is always going to be “tough, sexy edginess with an East London attitude” and an enduring post-punk and military feel.

He called the AllSaints leather biker jacket “a totemic [item]” for both collections, and recent looks include chunky knits — fitted and oversized — printed shirtdresses in a variety of lengths, bleached denim, and bomber and biker jackets galore.

With women’s wear, he said modular dressing is key, with the customer encouraged to build on their wardrobes each season. Collections are designed to be worn “anywhere in the world, anytime of year,” Beedle added.

Thursday’s fall 2016 presentation marks the first time that AllSaints has shown in Tokyo. Japan is a new market for the brand and over the past months it has tested the region with pop-ups. It now plans to open up to 10 spaces there, including stand-alone stores, concessions and wholesale.

Currently, the brand has 149 stores. In the U.S. there are 58 units, while in the U.K. there are 55. This year, the brand will open a further 50 stores, mostly split between the U.S. and Asia, with a few stores in the European Union and the Middle East. In March, AllSaints plans to open three stores in the U.S., ranging in size from 2,250 square feet to 4,030 square feet. The openings will be in Scottsdale, Ariz.; Las Vegas, and Honolulu.

Kim has taken AllSaints into new territories including Canada, the Netherlands, Germany, Switzerland and France. The company recently signed an exclusive franchise partnership in the Middle East with Majid Al Futtaim and has opened its first stores in the region in Dubai and Kuwait.

While the vast majority of stores are directly operated, AllSaints doesn’t own a single piece of real estate.

“We own the Web platform. We have the ability to drive anything that we wish on AllSaints.com and we use the online channel and experience and apply it both to retail and to online,” said Kim, adding that nearly 20 percent of all sales are online.

Despite the existing retail portfolio and openings planned for this year, Kim considers AllSaints to be “a digital brand that happens to have stores” and more of a “Palo Alto-based digital company rather than a fashion company in Paris or Milan.”

Kim also thinks of the brick-and-mortar stores as distribution centers. “If you come in as a customer and I don’t have your size, my job is not to frustrate you. I’m going to find you a size, and because I’ve inconvenienced you, I’ll send it to your house,” he said.

Indeed AllSaints, which has full visibility and access to stock, has already been taking advantage of strategies and technologies that luxury and high street competitors have just begun to use. Inditex, parent of Zara and Massimo Dutti, said last week that it was slowing down its investment in brick-and-mortar stores because customers were increasingly becoming retail neutral, buying both online and in brick-and-mortar shops.

Yoox Net-a-porter Group has just inked a deal with IBM to increase the transparency of its stock rooms worldwide in a bid to see what’s there, what’s not, and thereby step up its service to customers.

Alex Alexander, YNAP’s chief information officer, and a veteran of Walmart’s global e-commerce division, told WWD last week: “For me, one of the biggest enemies of customer experience is ‘out of stock,’ and we’re able to eliminate that by having the product at the right time for our customers.”

It’s not just retail that’s been given the digital treatment at AllSaints: Under Kim’s watch the nearly 3,000 staffers worldwide communicate via custom-made internal social and instant messaging networks and video conferencing with Google Apps. They train by means of videos produced in-house rather than by online manuals. “We want every team member to think digital,” said Kim.

The brand’s turnaround has been speedy, and Kim said that Lion’s cofounder Lyndon Lea has played a major role as a hands-on investor. Kim said Lea “leads by example. He’s supporting and challenging us.”

Lea certainly had a mighty task in front of him when he acquired AllSaints in 2011 along with Goode Partners in a deal valuing the company at about 105 million pounds, or $173.3 million. Goode has since sold its stake.

Although the brand name was untarnished, the company was in a financial mess. It had been forced to restructure following the nationalization of the Icelandic bank Kaupthing, which had inherited a majority stake in AllSaints after the former investor, Baugur, filed for bankruptcy in 2009.

Ernst & Young had put Kaupthing’s U.K. division into administration, the British equivalent of Chapter 11, and was charged with finding new investors for the brand, which was founded by the London-based designer Stuart Trevor in 1994.

Even after Lion and Goode took their stake, the drama continued, with management squabbles and the eventual exit of then-ceo Stephen Craig and chairman Kevin Stanford, who had owned the brand with Baugur and overseen the rapid retail rollout.

In addition to AllSaints, Lion’s current portfolio includes John Varvatos, GHD, Perricone MD and the upscale footwear brand Buscemi. Past investments include Jimmy Choo, which Lion purchased in 2004 for 101 million pounds, or $185 million, and flipped three years later for nearly twice that figure.

A Lion spokeswoman declined to comment on the company’s exit strategy for AllSaints.