The space at the Platform project is stocked with an exclusive Los Angeles capsule.

Allen Schwartz has popped up at Platform in Culver City.

LOS ANGELES — Allen Schwartz is just off a plane back from New York. He’s a little tired, he admitted, but not too tired to talk all things Allen Schwartz.

The advanced contemporary label, which most recently recharged itself under the Allen Schwartz moniker in 2017, has just dipped a toe into retail for the first time under the re-branded business at the Platform center in Culver City, nestling it in a curated collection of shops and restaurants that include Reformation, Bird Brooklyn, Tom Dixon and Aesop.

“Over the years, I’ve had as much as 12 [stores] but nothing like this and nothing like this type of merchandise,” Schwartz said, singing the praises of the line, which is made in downtown Los Angeles using fabrics sourced from Italy, Germany and Japan. “It’s [Platform] where we belong. It’s not a mall vibe.”

It’s likely more pop-ups or just activations in general, including events or workshops, could be on the way for the Allen Schwartz brand, given the success the company’s seen in the Platform door’s initial success, designer and creative director Bianca Bernal said.

Schwartz, the cofounder of Esprit de Corp, started ABS by Allen Schwartz in 1982 and some 35 years later breathed new life into the business with a pivot and re-brand to the advanced contemporary line Allen Schwartz, enlisting Bernal to head up design. 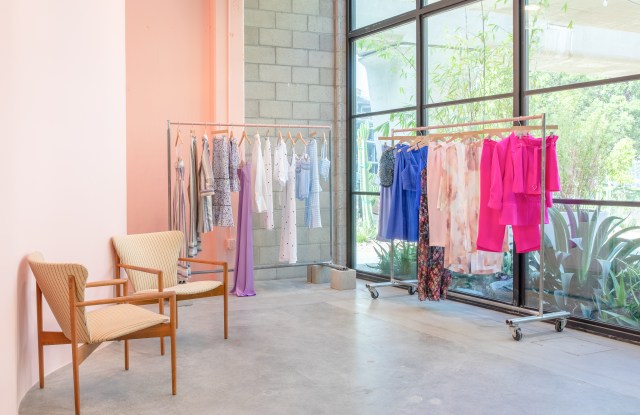 Inside the Allen Schwartz pop-up in Culver City.  Courtesy Photo

And what Allen Schwartz, the line, is really trying to do is perhaps best noted in the Los Angeles capsule Bernal created for the Platform pop-up.

The 10-piece capsule launched at the store, with distribution expected to expand later this month to online. The range retails from $215 to $500.

The designer said she took the company’s signature silhouettes, including silk slipdresses and satin suits, producing them in dusty tones.

The looks under the refreshed label have gained a following within Hollywood, with Kate Beckinsale, Elizabeth Banks, Jenna Dewan, Busy Philipps and Jessica Alba seen in Allen Schwartz. 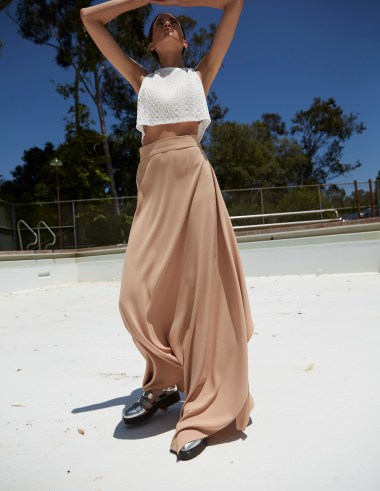 The line is now in 114 doors, with the goal to add another 300 this year, Schwartz said. One important thing to note, he said, is the line is not selling to department stores. While some have expressed interest while stopping in at the company’s showroom, Schwartz has politely said “no, thank you.”

“In my opinion, most of these retailers cannot sell goods,” he said. “They don’t have people in the stores who know how to sell the goods. They don’t display the goods correctly. The goods are shown fragmented. You design a collection. The shirts are on one side of the store and the pant is on another rack. They just can’t sell merchandise and, frankly, I don’t think they care about selling it because they collect the differential from the markdown. And they all look the same. Everybody’s the same.”

It’s a tough business, Schwartz and Bernal agreed, so the point should ultimately be to have fun. Selling to retailers who don’t care about the line? Not so much fun. Doing pop-ups and events to show off the product? That’s something the two can get behind.

“It’s fun working with beautiful product. It starts with the fabric,” Schwartz said. “In the other world I lived in, it was always about your limitations with fabrics. We don’t have that. We don’t have to work on certain margins anymore so I can work on less and make smaller cuts and be more intimate about running the business because I don’t have to worry about getting a phone call for $380,000.”