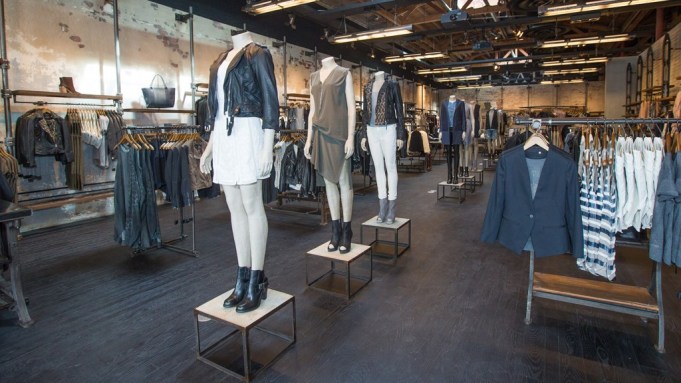 LOS ANGELES — Under the leadership of chief executive officer William Kim, AllSaints is once again charting a course toward expansion.

On Thursday, the British retailer opened stores in Beverly Hills on Beverly Drive and Toronto at Yorkdale Shopping Centre, marking its debut in Canada, as it seeks to spread retail units in North America and expose AllSaints to Asian tourists before breaking into Asia next year. But Kim, who took the helm of AllSaints last October after a series of management breakups and a close brush with insolvency resulting from costly growth strategies, is taking a cautious approach to expansion. He is vetting AllSaints’ retail concepts this year and making sure they prove themselves with the goal of laying the groundwork for a sustainable $1 billion global brand.

“The stores in Beverly Hills and Toronto are the first dominos to fall of many to come,” said Kim, adding, “It is not about the sheer number of doors this year. It is about testing concepts. Once we test the concepts, it will be about rolling them out and doing more consistent openings in 2014 and thereafter.”

The 5,500-square-foot Beverly Hills store, AllSaints’ third in Southern California, pushes the brand squarely into the digital age. Kim, former senior vice president of retail and digital commerce at tech-savvy Burberry, explained the intent is to create an “immersed multimedia experience” at the store with screens streaming digital content at the front and back of the space, touch screen point-of-sale technology, mobile tablets to control the retail environment and state-of-the-art acoustics. There is a stage for live performances and a VIP area for celebrities and loyal customers.

“We can generate lots of content going forward utilizing the store somewhat as a production studio,” said Kim. He emphasized that AllSaints isn’t throwing just any technology up against the store wall to see if it sticks. “I don’t think we are trying to be a gimmicky brand and doing an application here and there, or layer in technology that is not scalable,” said Kim. “We want future technologies to be foolproof for 2015 and after.”

In Toronto, AllSaints is entering new territory on several fronts. The 6,000-square-foot flagship at Yorkdale breaks the retail mold for AllSaints, which has primarily stuck to street locations but is amenable to malls as it pursues expansion. The success of the store will be significant for AllSaints’ prospects in malls, as well as its fortunes in Canada, where Kim believes consumer interest is high. In the country, he projected unit “growth, not just with one store, but multiple points of sale over the next two to three years and continued investment,” and he suggested that Vancouver could be an imminent stop for an AllSaints store.

The Toronto and Beverly Hills stores aren’t the only retail action that AllSaints has going on. The retailer is in discussions to locate a pop-up at Malibu Village. The pop-up could serve as the setting for roving presentations such as AllSaints’ “The Biker Project: Series One,” an exhibition with 50 original biker jackets now housed at AllSaints’ oldest store in London’s Covent Garden. At Bloomingdale’s, where AllSaints is in 15 doors with concessions, Kim said AllSaints is going to amplify its presence by possibly heading to the Bloomingdale’s in Chicago and more of its doors in Southern California.

When it comes to permanent stand-alone retail in the U.S., Kim said AllSaints could open stores in cities where it already has them, notably New York and Las Vegas, and cities where it doesn’t, like San Diego and Honolulu. “The interesting thing is we are pretty equally split between women’s and men’s in the aggregate, but in the U.S., the interest in women’s is greater,” said Kim. “There’s a new customer base that’s quite nice.”

Elsewhere, AllSaints will soon open a store in Amsterdam. In its home country, Kim also mentioned the retailer is updating fixtures to refine its concession statements within Harrods and Selfridges. AllSaints’ biggest upcoming target, however, will be Asia, starting in 2014. “We have no stores in Asia, and the enormity of that opportunity lies ahead. One day, Asia could be a third of our business,” said Kim.

As AllSaints moves forward with retail, it is looking to diversify its assortment. Kim is focused on developing an array of non-apparel goods. Only a fraction of sales currently, Kim said non-apparel “has to be 20 to 25 percent” of sales down the road. To help get there, he detailed that AllSaints is concentrating on shoes beyond boots, an existing strong footwear category for the brand, and is initiating a women’s large leather handbag program before holiday.

Revenues for AllSaints, which was rescued from bankruptcy by Lion Capital and Goode Partners in 2011, were 199 million pounds, or $303 million at current exchange, in the year ended Jan. 31, down slightly from 209 million pounds, or nearly $318.3 million, during the same period a year earlier. The retailer has 97 stores and concessions worldwide, including 67 in Europe and 30 in the Americas. Kim indicated that AllSaints’ business is showing signs of an improvement this year. He reported sales at flagship and mainline stores are up 15 and 9 percent, respectively, season to date.