The company’s growth plan is being led by the desire to craft a more well-rounded image extending beyond the leather jacket. 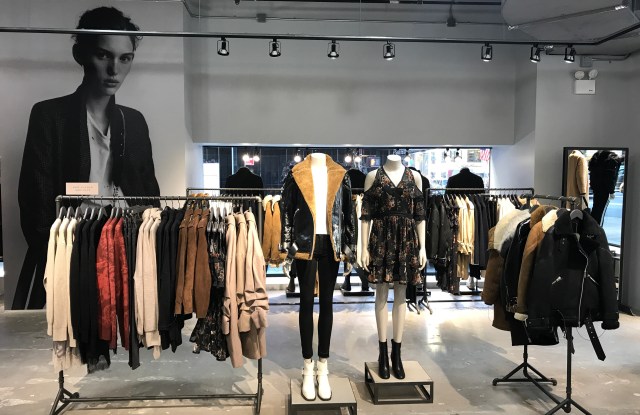 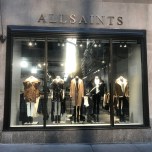 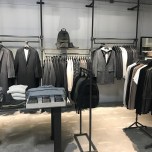 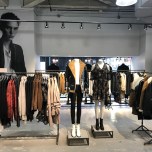 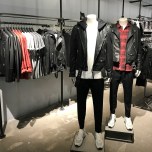 At AllSaints, no part of the business is being left unturned when it comes to growth opportunities. The company on Friday unveiled a temporary door at Rockefeller Center, set to remain open for at least a year, and follows that up Nov. 17 with a permanent store at Westfield Century City.

The 7,000-square-foot flagship will carry exclusives on some shearling and leather jackets.

Blasko relocated the company’s New York office two-and-a-half years ago to the other side of the country in West Hollywood to be housed within the Pacific Design Center’s red building.

“We, as a brand, are always design thinking and want to be on the cutting edge of what everyone’s not doing,” Blasko said. “So we decided to move the fashion business to L.A.”

Blasko has been focused now on expanding and building brand awareness, which in part has meant hammering away at all aspects of the business.

AllSaints totals 243 outposts worldwide in a combination of company-owned stores, franchises and concessions. In North America, the retail footprint will total 77 by year’s end — in a mix of standalone doors and concessions — once Century City opens this month. Those figures are growing, with Blasko confirming additional doors are already on the books for next year and said more generally there is still plenty of room for North American growth in markets where AllSaints does not have a brick-and-mortar presence.

The company is also looking at its licensing business, a strategy Blasko said is in the beginning stages, which will enable it to expand into categories the brand doesn’t currently license.

Wholesale presents additional untapped potential through expansion in both the specialty channels as well as within the majors. Roughly two-and-a-half years ago the company launched its Capital Collection handbag offering that has since been expanded out to Bloomingdale’s and Nordstrom.

The three-pronged approach — direct, wholesale and licensing — will all be linked by a greater bid to boost the brand.

“We’re a global brand. We have 243 stores in 27 countries. North America is a big part of that as well as Asia as we continue to grow those two regions quite rapidly,” Blasko said. “For us, we’re continuing to promote the brand. We don’t just sell clothing; we’re a lifestyle brand that has a music company. We have a film company.”

On those last two points, Blasko was referencing the company’s “L.A. Sessions” series done at the Beverly Drive store in Los Angeles not far from the company’s office. Segments are released in monthly installments and have so far included Imagine Dragons, Billy Raffoul, IN-Q, Madison Beer and Kaleo performing their work. It’s a program that’s about weaving the art with the fashion, Blasko said, adding, “We’re not just your best leather jacket.”

At Planet Blue, Malibu Vibes Infused on the Selling Floor