NEW YORK — John Galliano’s taste for the dramatic and other-worldly has met its match in the sultry climes of Hawaii, as Dior prepares to open its second Hawaiian outpost on Saturday in Waikiki. 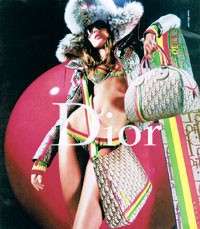 NEW YORK — John Galliano’s taste for the dramatic and other-worldly has met its match in the sultry climes of Hawaii, as Dior prepares to open its second Hawaiian outpost on Saturday in Waikiki.

The 4,000-square-foot space at 2222 Kalakaua Avenue reflects the design concept the company has been implementing in its shops during the past two years. Seeking to balance the brand’s youthful rigor and its classic heritage, the store design combines elements of old and new, with antique reproductions, lacquered walls, and houndstooth-patterned rugs offset by subtle shades of gray and white.

“We wanted this store to be very accessible, very fresh and very modern because of the environment in which it resides,” said Marla Sabo, president and chief operating officer of Christian Dior, North America.

“Our business in Ala Moana [Center] has always been very, very strong, and there’s a tremendous amount of local business in Waikiki,” Sabo said of the decision to open a second Hawaii store. “Also, the site is on a piece of Kalakaua Avenue which is probably one of the highest-trafficked corners near the DFS [Galleria] and Louis Vuitton — all of that rolled together was something that was very, very attractive to us.”

The assortment in the Waikiki boutique will mirror that of other Dior stores, Sabo said.

“The Dior customer usually wants what’s best at Dior regardless of where they reside,’’ Sabo said. “The bestsellers tend to be the same all over the world. But we do take into account local needs and lifestyle. We can adapt things within the assortment to satisfy those needs. We’ll have swimwear here year-round, and we created a strong emphasis on accessories.”

The Waikiki unit marks the 16th Dior store in the U.S., and the retail rollout is continuing. Dior will open a boutique at The Galleria in Houston next month and will expand its Forum Shops at Caesars Palace store, which houses only accessories, to include its full line of offerings. On an international level, the company plans to open another half dozen or so stores this year in locations such as Tokyo’s Ginza and stand-alone Dior Homme stores in Kobe and Shanghai.

“We have a very nice plan for the next three years for expansion,” Sabo said. “We look at our existing stores to see where we can renovate and enlarge existing stores that are well placed. Business changes, and you can’t stand still.”