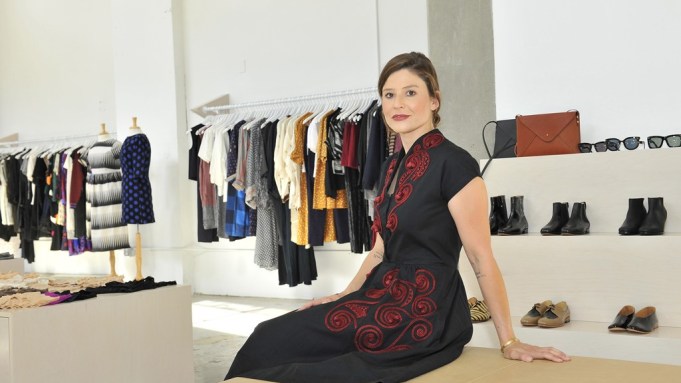 LOS ANGELES — After honing her skills as a merchant at American Rag Cie and Planet Blue, Jennifer Althouse is hanging her own style shingle in downtown Los Angeles.

Althouse, who was once the head buyer for American Rag and served as director of merchandising and denim buyer for Planet Blue, unveiled a 1,650-square-foot shop fusing vintage inspiration with modern execution on Oct. 1. Dubbed AltHouse, the store signals that the retail renaissance in downtown Los Angeles is adding independent boutiques that are following the path cleared by Acne Studios, Aesop and Urban Outfitters on Broadway.

Soon, AltHouse will be joined by Skingraft, an edgy leather label that is relocating its shop from four blocks away. By settling on the corner of Eighth and Main Street, just around the corner from Broadway, Althouse saves on monthly rent, paying $3 a square foot, or about a third of the cost for a lease on Broadway.

“I wanted to go to an area, even around the corner, where it was not developed, where I could stand out,” Althouse said. “Downtown is up and coming. It may not be there yet in terms of foot traffic. It will be in the next three years. It’s crucial to go into an area where there’s not a lot of competition.”

Althouse is countering the irregular number of visitors who trek to a retail destination with a Web site. Launched in late August, her e-commerce site has already shipped to a number of locales — San Francisco, Washington, Seattle and even Spain — except for Los Angeles.

“That’s what I love about [the Web],” Althouse said. “I’m reaching outside of Los Angeles [with e-commerce] and my store is reaching the city.”

Designed to be light, airy and a bit raw, the store offsets the gray floor tiles originally set in the Twenties with natural wood that is custom-made into tables displaying lingerie by Cosabella and Xirena and jeans from J Brand and Calvin Rucker, as well as steps supporting shoes by H by Hudson, sunglasses from Grey Ant and purses designed by Lizzy Disney. Big, round vintage light bulbs float from 20-foot-high ceilings above bronze and silver chairs from the Seventies. Neon yellow trays draw customers to an array of delicate jewelry and beauty products by Windsor Edwards.

Hanging from the white racks are pieces by Suno, Rachel Comey, Black Crane, Rodebjer and DWP in vibrant colors and patterns.

Althouse is also introducing her own line called ALT, which originated from her everyday uniform of Ts and jeans. Capitalizing on her experience as a denim buyer and the designer who launched Joe’s Jeans’ Else brand at Macy’s, she’s offering washed-lambskin leather jackets for $750 along with black high-waisted skinny jeans and gray midrise distressed styles with unfinished hems, both for $225.

To best cater to her target customers between the ages of 25 and 40, Althouse is willing to offer curbside delivery and keep later hours so they can shop after work and dinner at the nearby restaurants. She’s also eager to work on the floor.

“I’m excited to get to know my customer, what they like and don’t like,” Althouse said. “That’s how you become a successful retail store — knowing what your customer wants.”