A new collaboration with Aerie introduces activewear for every woman.

Olympic gymnast Aly Raisman is busy bending over backward and twisting arms so that girls can wear whatever they want — without the shame.

“There is so much pressure on girls and women to look a certain way, to say the right thing, to have the perfect Instagram photo,” Raisman told WWD. “People don’t understand how much pressure — and how much time — women spend in front of the mirror, trying to decide what to wear to help the men in their office respect them.”

That’s why the gold medalist is launching a new activewear collection, her second collaboration with ath-leisure and intimates retailer Aerie, that is both comfortable and professional. Raisman said the nine-piece assortment, Aerie x Aly Raisman, can be worn anywhere, by anyone.

The collection includes brightly colored stretchy pants, bralettes and flowing tank tops. A sports bra covered with flowers in green and blue hues was inspired by Raisman’s love of gardening, one of her preferred methods of relaxation. Raisman also penned inspirational quotes along some of the hems, with phrases like “Trust yourself,” “Unapologetically me,” and “In the moment.”

On or off the balance beam, Raisman said she “only wears Aerie stuff,” like leggings, jeans, comfy sweaters and minimal makeup.

“My thing is, I always say, you should just wear whatever makes you feel comfortable,” she said, but added, “I still like to think of myself as a professional.”

That’s one of the reasons why Raisman said she loves working with Aerie.

“They’re so supportive and their main thing is body positivity and making girls and women comfortable in their skin,” she said. “It doesn’t matter if I’m posing in a bra or underwear or a sports bra; I can wear whatever I want.” 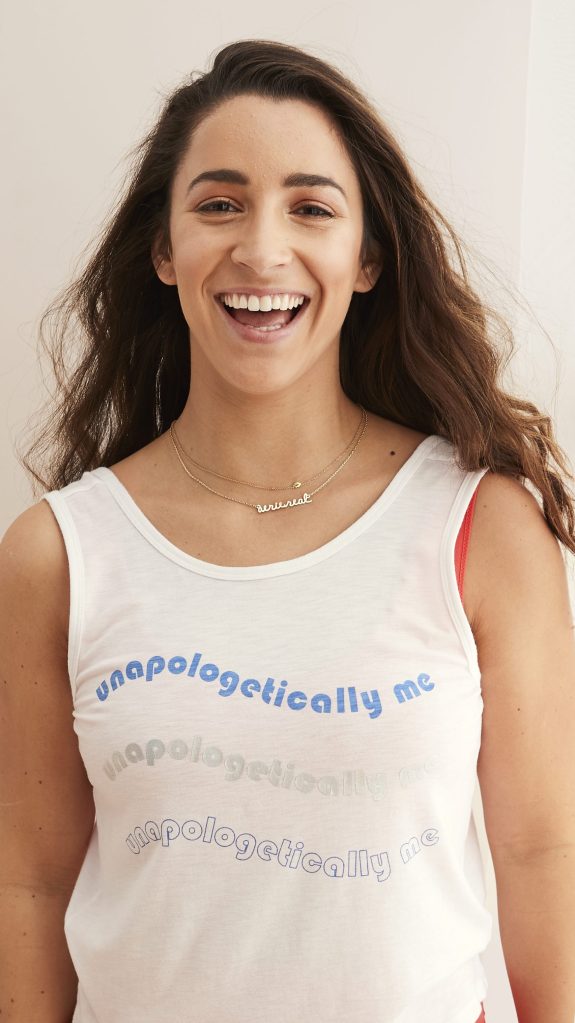 And as the battle between intimates brands — like hypersexy Victoria’s Secret and smaller start-ups that promote inclusivity — rages on, Raisman said it’s important to celebrate all body types. The petite gymnast, who was once teased in grade school for being too thin, only to later be called fat on social media, described the ridicule as hurtful.

“I’m actually friends with some of the Victoria’s Secrets models,” said Raisman. “I don’t know all of them, but some of the ones that I’m friends with, they’re naturally that thin. We’re getting to a point — not me, but on Instagram — where people are shaming those models for being too skinny.” 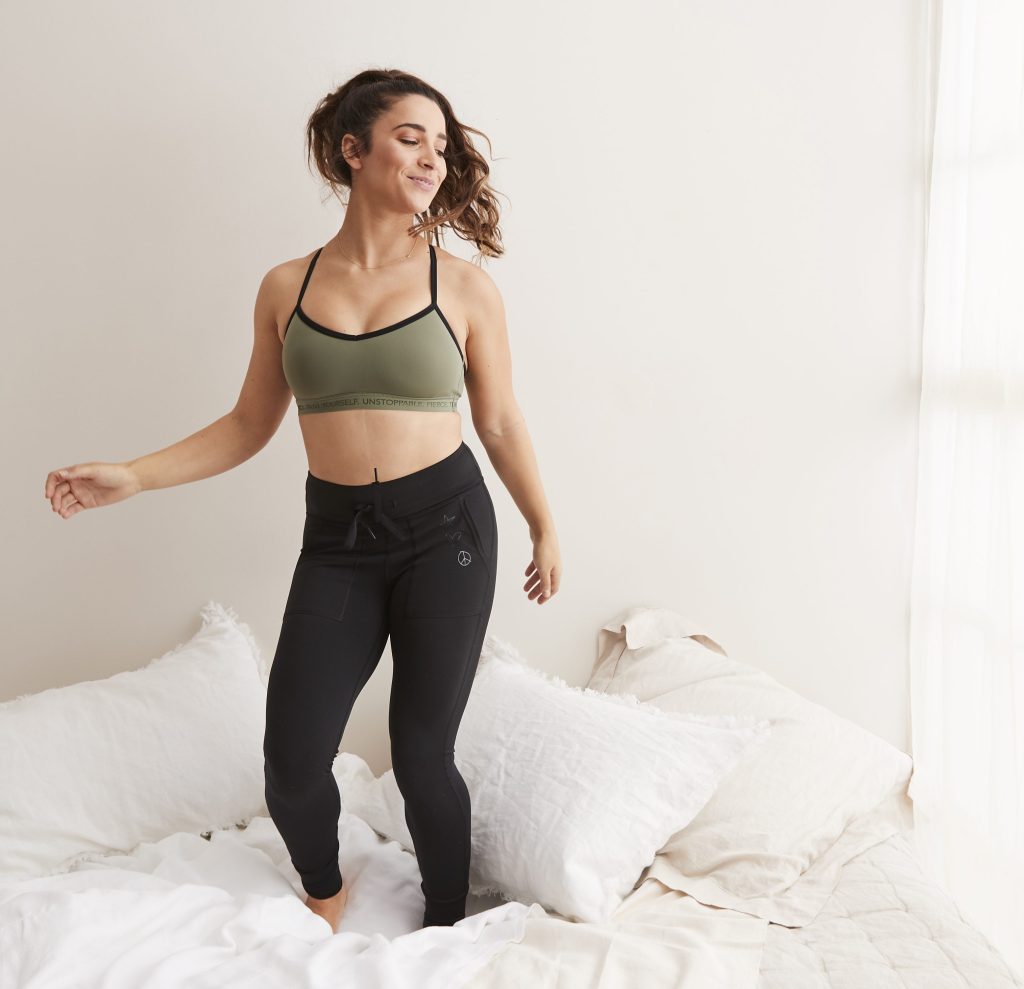 In addition, she said she hopes the collaboration will heighten awareness about child sexual abuse victims.

In late 2017, Raisman came forward as one of the victims of child sexual assault from former Olympic physician Larry Nassar. After the news broke, she said Aerie’s president, Jennifer Foyle, called her on the phone to tell Raisman she loved her.

“This is so much more than a collaboration,” Raisman said. “They really feel like family to me.”

In fact, Raisman has been part of the Aerie family since 2018, when she signed up as an AerieREAL Role Model, the campaign that promotes body positivity and un-airbrushed models. Last year the partnership included a swimsuit collaboration.

Aerie is now donating 15 percent of proceeds from this new collection, or up to $75,000, to Darkness To Light, a non-profit that works to prevent child sexual abuse.

“Our Aerie girls are going to be really inspired by the messages that the product has,” said Stacey McCormick, vice president of marketing at Aerie. “Pretty much anything [Aly] touches our community wants to be a part of.”

Prices range from $25 to $50 and items are available online and in select stores for a limited time starting April 4. But McCormick said the tie-up will likely sell out quickly, much like the rest of Aerie’s assortment.

Case in point: The fashion retailer, which is owned by American Eagle Outfitters, surpassed $1 billion in revenues in a single quarter last December. The following quarter, Aerie comps surged 23 percent — that’s on top of a 34 percent increase the year before — as the company announced plans to open between 60 and 75 new Aerie retail locations in 2019.

The brand’s mix of real women and fun, feminine styles has helped the company to grow — and helped create a generation of copycats trying to duplicate Aerie’s message celebrating real women.

But McCormick said she doesn’t mind.

“We were the first and we are happy to influence others,” the executive said.

“Feeling good about yourself shouldn’t be the responsibility of a clothing company. It should be the way you feel internally,” she added. “[But] when you think about what we do in intimate apparel, even swimwear, our job is to basically make people feel good about what they put underneath. If we can in any way help those women feel empowered by what they put on underneath and that they shouldn’t be afraid of themselves, and they shouldn’t hide, then, you know, we’ve done our small bit.”

Raisman and Aerie are kicking off the collection with a launch party on April 6 at Manhattan’s SoHo Aerie shop.