Well, that was fast. After Amazon closed the books on its massive Prime Day firehose of sales, which ended on Wednesday, the e-commerce titan was at it again, announcing its Holiday Dash sale in the wee hours of Friday morning.

A press release issued at midnight described the event as being packed with “Black Friday-worthy deals across the most giftable categories — from small businesses and top brands….”

The news, which will surely please consumers who missed out on deals from the previous sale, puts an already jittery retail sector on notice, as Amazon seems to be rolling its Prime Day momentum into an accelerated holiday season.

According to the company, Holiday Dash will immediately start dropping deals daily, with more than a million discounts going out worldwide on categories from fashion and beauty to electronics, toys, home and kitchen, as well as Amazon’s own paid online services — such as Prime Video, Amazon Music and Audible Kindle — as well as its own house brands.

Elsewhere in the fashion and beauty categories, the marketplace will feature discounts ranging from 15 to 50 percent from a range of brands. Just some of the fashion labels mentioned include Calvin Klein, Levi’s, New Balance, Tommy Hilfiger, Lacoste and Nautica, among others.

Discounted beauty products will be available from brands such as Elemis, Mario Badescu and Redken, in addition to gadgets and appliances from T3, Foreo, Revlon, Panasonic and Fitbit. 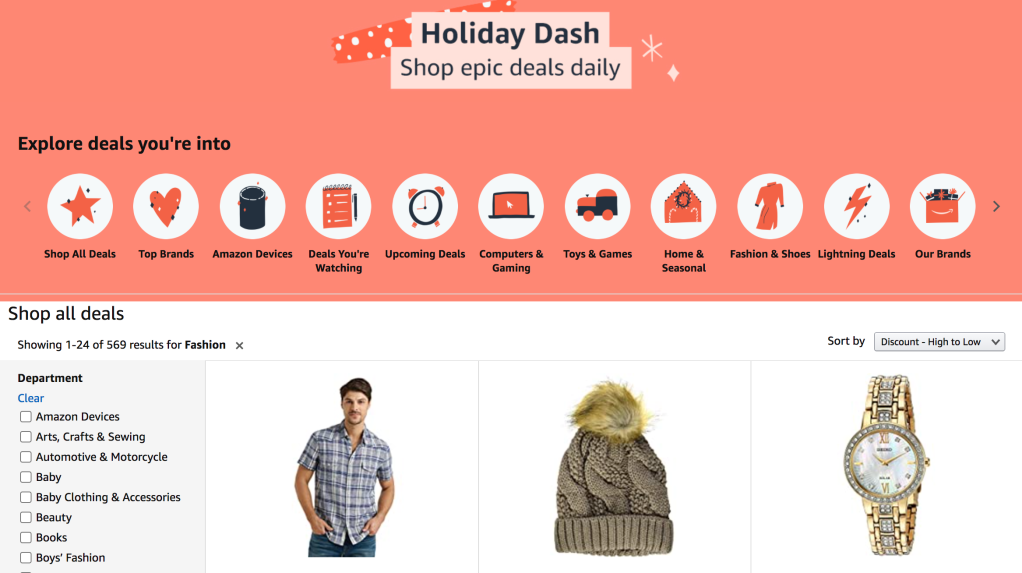 Shoppers can hit up the e-tailer’s mobile app and web site, or ask “Alexa, what are my deals?” to the Alexa app or any device that supports Amazon’s voice assistant.

The event marks the start of the company’s extended holiday returns. Most items that ship between now and the end of the year have a longer window to return merchandise, ending Jan. 31.

The Holiday Dash launch follows Amazon’s announcement that this week’s Prime Day event, which was postponed from its typical July timing, pulled in a record $3.5 billion in sales from third-party merchants.

The proximity to the holidays was apparently a major factor driving the surge in activity, which prompted other retailers — including Target, Walmart, Kohl’s, J.C. Penney and Bed, Bath & Beyond — to step up promotions around the same time frame.

Retail watchers will surely be on guard to see how rivals respond to Holiday Dash. Others may be focused on other matters…like how the company treats its workers, perhaps especially during the peak season.

Just before the Holiday Dash news went live, Democratic senators sent a letter to Amazon demanding answers about the company’s alleged interference with employees’ right to organize. Recent reports contend that the company surveils its workers — the very same people who will now be expected to keep the operation humming during this extended sales period.