In a 46-page analysis of back-to-school shopping trends, brand-performance agency ForwardPmx identified some notable changes in how retailers and brands are driving business as well as how consumers are responding.

In the report, Amazon, not surprisingly, takes center stage as consumers seek value and convenience. But traditional retail brands also play an important role and have adopted some tactics from the online giant.

In its analysis, researchers at ForwardPmx looked at historical spending patterns and tracked b-t-s sales for students kindergarten through grade 12 as well as college. They found two tiers of shoppers: “early bird” consumers who kick start their shopping around July 4, and “last-minute” shoppers who wait until September.

Meanwhile, Amazon Prime Day garners a lot of b-t-s business. “National [online] search interest for back-to-school hit its peak on [Aug. 11] last year, and we anticipate a similar time frame this year, with searches kicking off on 7/4 and steadily increasing by Prime Day,” ForwardPmx said, adding that 79 percent of b-t-s shoppers plan to shop on Prime Day while 60 percent plan to shop on Amazon.com, while “31 percent say they’ll shop other retailers in-store and 26 percent will shop other retailers online.”

Looking at the overarching trends, researchers at the firm said they see U.S. school enrollment growing 0.3 percent this year to 69 million students. “The student population has grown more diverse, with Hispanic enrollment growing the fastest,” ForwardPmx stated, adding the Hispanic households are also doling out more money, and this year are expected “to spend $833 on average per family versus $685 per all other households.”

ForwardPmx said last year, total b-t-s spending was around $83 billion, and they expect it to be about the same this year. ForwardPmx also noted that 67 percent of b-t-s dollars “are spent on or by college students — who comprise 18 percent of total enrollment.”

The National Retail Federation is expected to release its b-t-s forecast soon. 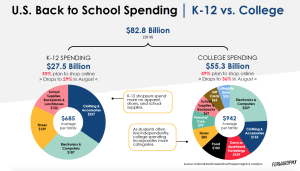 The report’s authors said the most popular items bought during the season include apparel, school uniforms, footwear, team sports items, school supplies, electronics and backpacks. And online, free shipping is the number-one incentive while buy online, pick up in store continues to grow in importance “along with the opportunity for add-on purchases at point of pickup,” the firm said.

Another incentive is the expected rollout of tax-free shopping holidays in 16 states this month and in August, which the researchers said will drive sales. And while Amazon muscles in and leads the season, shoppers will turn to other retailers to seek out “Prime-like deals,” ForwardPmx said, adding that “some retailers co-opt ‘Prime’ language in competing offers” while others retailers “promote alternative ‘Summer Black Friday’ events.”