In Berlin, Amazon’s shoppers could use artificial intelligence to find the perfect jeans and strut along a digital runway. Despite enthusiasm from participating brands, it’s hard to know just how successful Destination Denim was. 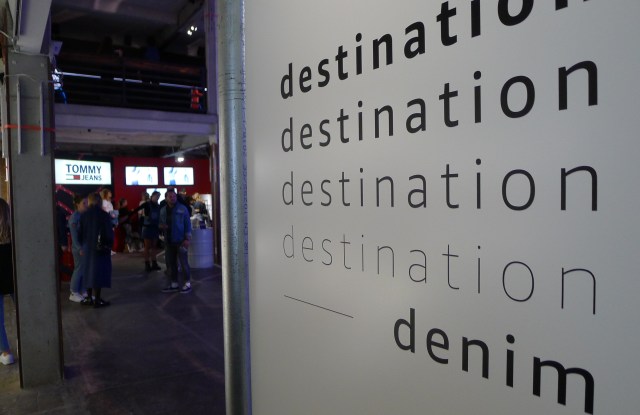 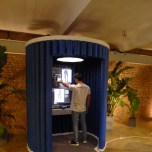 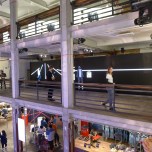 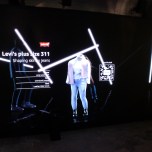 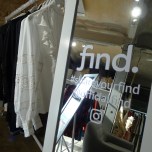 The event offered visitors three floors of omnichannel retail experiences in a trendy, central city venue, the Kuhlhaus. Activities included everything from hands-on customization to harnessing Amazon’s advanced analytics to find the perfect pair of jeans.

The latter process took place inside three custom-made booths on the third floor, in front of a large reflective screen and an Amazon Echo Dot smart speaker. “Welcome to your personal fashion experience,” virtual assistant Alexa greeted anybody who entered. “I am sure we will be able to discover your perfect pair.”

Alexa then questioned users about which color and style of jeans they were looking for — men’s or women’s; smart or casual; blue, gray or black — whittling 1,711 pairs down to just three potential purchases in under three minutes. Once the three “perfect pairs” were presented onscreen, anyone with an Amazon shopping app on their smartphone could scan the proprietary “Smile” code there and, if they wished, order the garments. These would then be delivered for them to try on at home.

User reviews of the process were positive, if not wildly enthusiastic. It was easy and useful, given the amount of stock Amazon had on offer, said most of those WWD surveyed as they left the booth. And the results were reasonable — but nobody was rushing out to buy what Alexa had suggested nor did they think the denim options were perfect. “Buying jeans is more complicated than that,” one woman suggested.

Another floor down, visitors could contort themselves in front of an attention-getting digital runway. Faceless, digital mannequins wore different styles of denim on a long, horizontal screen, while cameras tracked visitors as they walked past, mimicking their movements. This was more about entertainment than shopping, although when the digital models stood still, it was possible to examine the jeans more closely and once again, scan the code and order them immediately, if one wished.

“I don’t know if I am going to Amazon to buy jeans after coming here,” remarked one 27-year-old Berlin local, who requested anonymity. “But what is really interesting is that you can see this is the future of retail, where nobody holds much stock and you order everything online. Then Amazon delivers.”

A small selection of clothes from one of Amazon’s private labels, Find., were available to try on and those who did were encouraged to pose in two seasonal photo booths, one of which even blew soapy snow onto a wintry scene. But almost all of the other garments on display — items from the online giant’s latest influencer-collaborations, The Drop, as well as jeans from brands like Seven For All Mankind — could only be accessed, if you ordered them from Amazon first.

In exchange for a donation of 25 euros or more to the World Wildlife Fund, Tommy Hilfiger gave visitors a recycled denim jacket and helped them add personal touches, in the form of patches and laser printing. “It was great for our staff to interact with the customers here,” a spokesperson from the Tommy Jeans stand said. “In the end, we had no more jackets. All these are reserved,” she said on Sunday afternoon, motioning at a rack holding what was left of the 300 jackets the brand brought to the event.

It took between 45 and 60 minutes to visit every stand on the site. Entry was free but visitors had to book ahead, via Amazon, for workshops, talks and concerts. The nightly gigs, featuring a variety of musicians — Jorja Smith from the U.K., popular German pop star Anne Marie and Liam Payne (who replaced Rita Ora at the last minute)  on the opening night — were booked out and well-attended, with crowds estimated at around 300 strong every evening. But during the days, the venue often felt empty.

Amazon’s retail technology worked very well at the Berlin event and scanning the Amazon Smile codes certainly made any potential purchases easier. But judging by the somewhat lackluster reception from daytime visitors, it remains unclear exactly how much Destination Denim enhanced Amazon’s reputation as an online fashion retailer with local shoppers.