The indoor entertainment and retail complex reopens Thursday with 85 retailers, and is counting on consumers tired of sheltering in to get out and shop and have some fun.

American Dream in East Rutherford, N.J. is right next to MetLife Stadium.

That’s Ken Downing, chief creative officer of Triple Five Worldwide, standing under a bulkhead and describing its 40-foot-wide digital sign advocating face masks and social distancing. “The messaging is clear but we bring a little joy to it. It’s animated, it’s big, with color and bold graphics, so the message gets across,” said Downing.

He’s giving a guest a tour of American Dream, the massive indoor entertainment and retail complex in East Rutherford, N.J., developed by Triple Five. The mall reopens Thursday, after being shut down on March 16 by the pandemic.

From the 1.5-acre indoor wave pool, which happens to be the largest in the world, to the soaring vaulted wood ceiling and the 50,000-square-foot Zara store — the chain’s largest in North America — everything about the complex seems big and ambitious. So is the effort to reduce the risk of COVID-19 infection and make people feel safe from getting infected.

It’s critical that the 3.3 million-square-foot complex attract steady crowds, considering the price tag to build the complex exceeded $6 billion and there were repeated opening delays, either financing, construction or pandemic-related.

High unemployment, retail bankruptcies and store closings have hurt business at malls, and many people remain reluctant to enter indoor spaces. But others are anxious to get out of their homes from sheltering in and want to have some fun, and there’s pent-up demand for clothing and other material goods, as well as discretionary dollars available due to canceled vacations and traveling, which potentially benefits American Dream.

Downing’s tour begins at the most central of the four main entrances. “You see we created these one-way lanes to do our best to insure physical distancing and avoid large gatherings,” said Downing, indicating the arrow stickers on the white marble floors. They’re spaced 6 feet apart, to guide people queuing up and walking through the common areas, and into the stores and attractions. There are also safety “ambassadors” directing visitors to follow the one-way floor stickers, and control the crowds.

Though directional stickers are widespread in supermarkets, other stores and on public transportation, people don’t always abide by or notice them. But according to Downing, “We’ve already had great success with these at the Mall of America and the West Edmonton Mall,” the two other giant retail/entertainment complexes operated by Triple Five in North America. “They do work, and people are very loyal to protocols here in New York and New Jersey.”

Through the complex, there is digital and regular signage reminding shoppers to wear face masks and repeatedly use hand sanitizers. There are 200 of them. Overhead, a woman’s voiceover advocates face masks and social distancing, and says: “If you don’t feel well, come dream with us on another day.”

Buying advance tickets online is encouraged. So is using the touchless kiosks with QR codes on the premises to obtain tickets. There are also ticket counters with Plexiglas screens separating customers and the staff behind the counters.

The complex is required to operate at no more than 25 percent capacity, per Centers for Disease Control and state guidance. That goes for all the entertainment attractions and retail stores, as well as the common area, which are all devoid of seating and tables to limit people congregating. Furniture will be installed after the pandemic subsides. American Dream will be open at reduced hours for increased cleanings and there is an Urgent Care Center and an educational kiosk to learn about health. The complex also has a new HVAC system for clean air circulation.

In terms of enforcement, each store is required to maintain crowd control, though American Dream also has a security team as well as the ambassadors to assist. Retailers have Plexiglas barriers at checkouts, hand-sanitizing stations, floor arrows guiding people to social distance, and some retailers will check temperatures. All of the entertainment parks — the Dreamworks Water Park, Nickelodeon Universe amusement park and the Big Snow ski slope — will check temperatures. No one with a temperature of 100.4 or higher will be allowed in those areas. 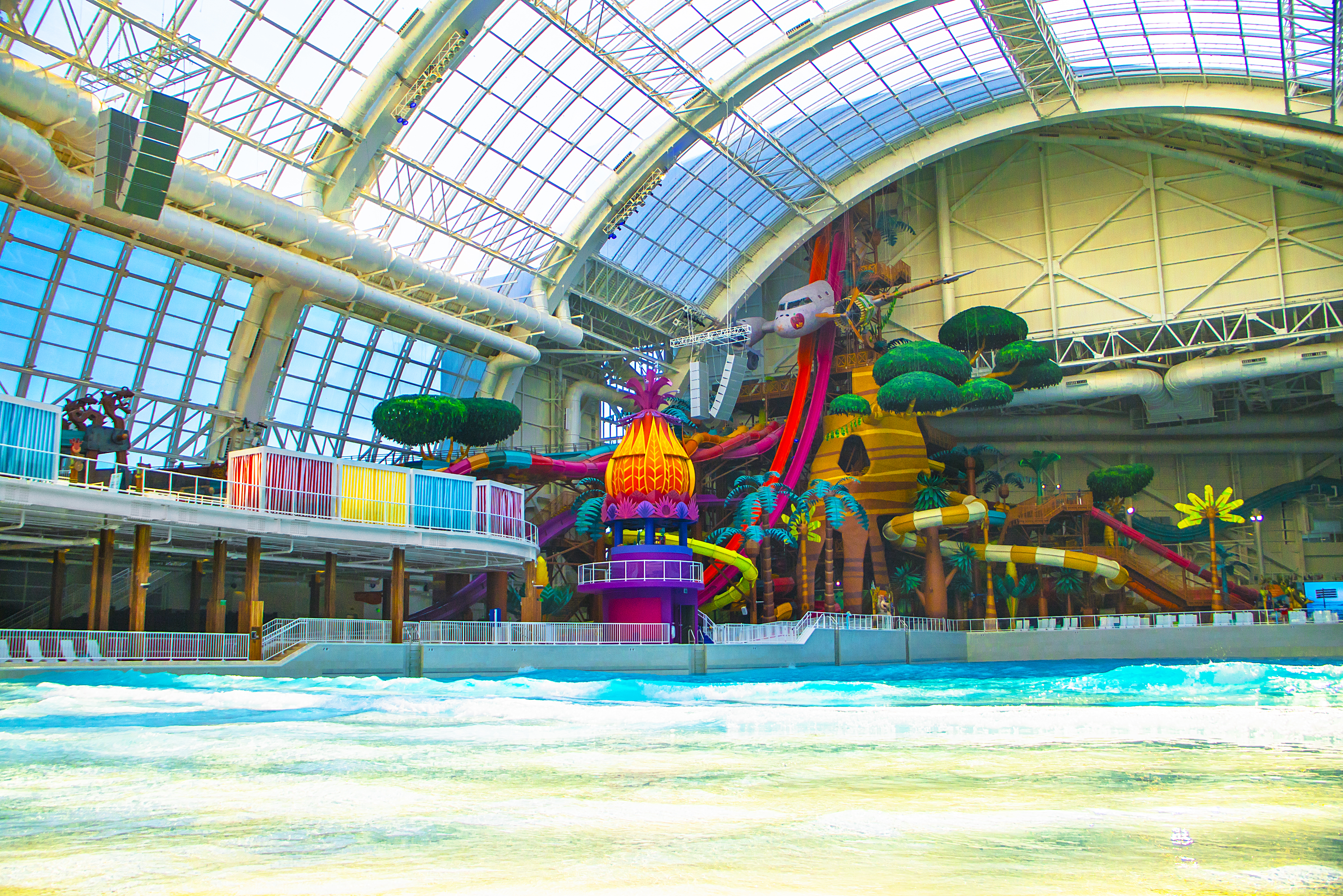 At the Water Park, when you get out of the water, you must put a face mask back on. Officials noted that the virus can’t spread in the water because it’s chlorinated. Temperature in the water park is always 87 degrees to encourage swimming in the giant wave pool.

Right near the entrance is a 3,000-square-foot Merlin play area with a Memphis design point of view. There’s an Out of This World Black Light miniature golf course, and a Sea Life aquarium scheduled to open in spring 2021. Further into the complex, there’s an Angry Birds No So Mini Golf Course. On the mini-golf courses, guests are limited to four in a group, so if you are a family of eight, you have to break up into two groups. Players will be separated by every other hole, so for example, if you are putting on the first hole, there won’t be other players on the second hole, but there could be on the third hole.

At the water park, as well as the Nickelodeon amusement park and the ski slope, there will also be people frequently wiping surfaces. “We also have disinfecting guns,” said Downing.

Not surprisingly, Thursday’s reopening won’t see a gathering of local politicians and VIPS to mark the occasion. About 85 stores — including a 60,000-square foot Primark, a 35,000-square foot H&M, and a Dreamworks Water Park shop selling toys, towels, T-shirts and swimwear — will reopen. There are also 20 pop-up spaces, which Downing nick-named “Dream Drops,” including Sprayground, Mulberry & Grand and Rever. Several fast-food establishments will open within the next week or so, and by the end of October, 100 stores are expected to be operating.

The temporary shutdown enabled American Dream to unveil a retail array with a larger contingent of stores ready to do business, making for a more impressive shopping experience, Downing said. The visibility is good, stores are easy to see and have ample glass storefronts, and the setting is spacious and feels contemporary and upscale for the mostly mainstream array of recognizable brands.

While a large contingent of retailers and entertainment components will be in business Thursday, others are still several months away from opening their doors.

The luxury wing, to be called The Collections, won’t make its debut any sooner than March. It will house a 100,000-square-foot Saks Fifth Avenue, as well as Hermès, Tiffany, Moncler, Dolce & Gabbana and Watches of Switzerland, among other brands.

Two large spaces were intended to be filled by Barneys New York, which was liquidated at the beginning of this year, and Century 21, which is in the process of liquidating. Downing said American Dream is working on finding replacement tenants, but 90 percent of the retail space has been leased.

Also upcoming, a Coca-Cola Eats food court for grab-and-go food; the first Munchies food hall in partnership with Vice Media featuring emerging and established chefs and concepts from New York and New Jersey, and a dining terrace with more than 15 full-service restaurants, from family to fine dining. 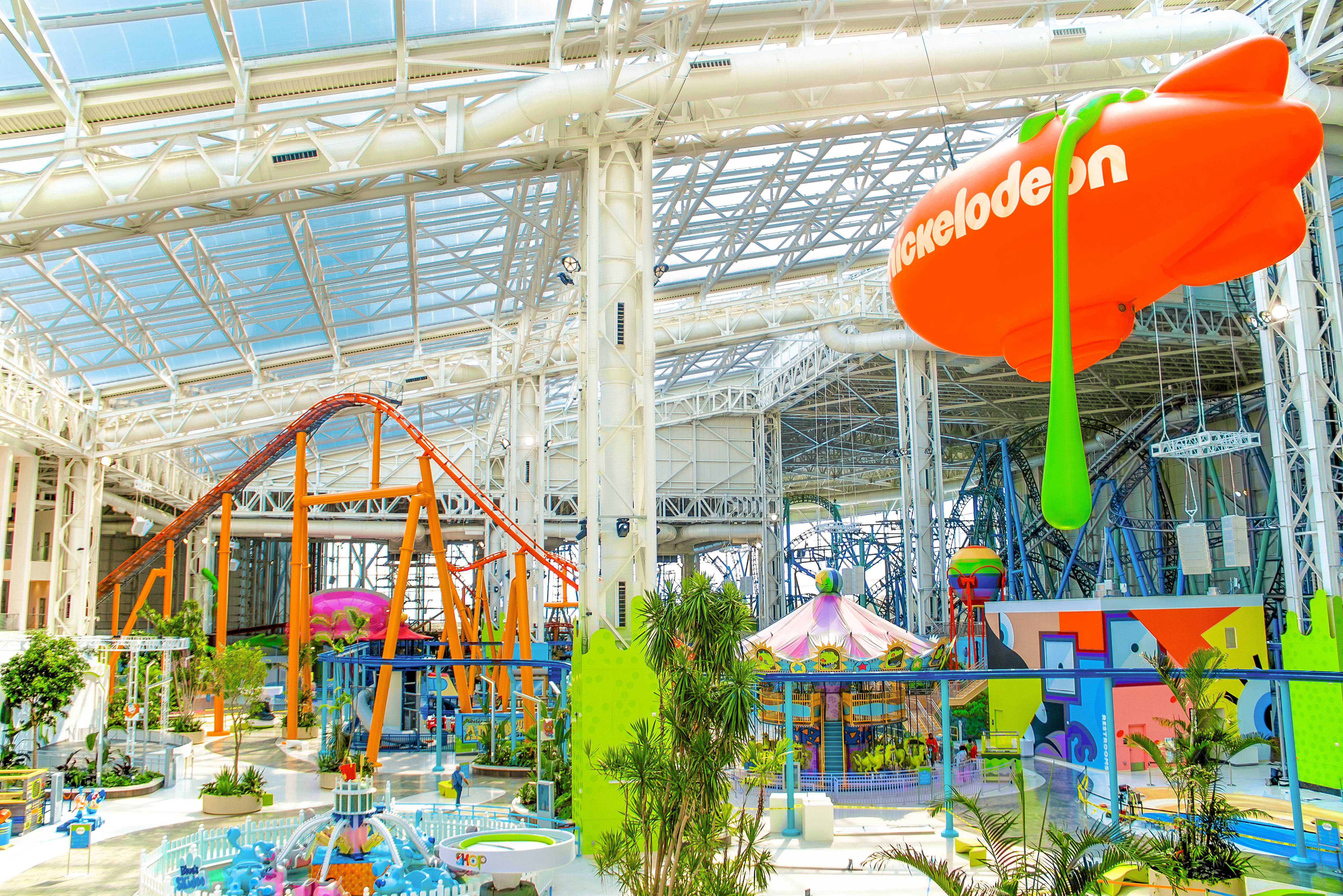