The 3.3 million-square-foot project is building up to its retail opening, which is set for March.

American Dream, the 3 million-square-foot entertainment and shopping center unveiled its Nickelodeon Universe during a preview for friends and family

They came, they saw, they played — but they’ll have to wait until March to shop.

Advance tickets to American Dream’s Nickelodeon Universe Theme Park — the first section of the massive 3.3 million-square-foot entertainment and shopping center in East Rutherford, N.J., opened Friday — with tickets selling out for the weekend at prices from $39.99 to $49.00.

Skating flash mobs, marching bands, hay and pumpkin displays, a farmer’s market and a 60-foot Statue of Liberty made of candy were just a few of the sights at American Dream’s preview.

But questions about the country’s second-biggest entertainment-cum-retail center remain. For example, will visitors who travel to the project lured by amusements such as Teenage Mutant Ninja Turtles Shellraiser — billed as the steepest roller coaster in the world — also shop at Saks Fifth Avenue, and its Louis Vuitton and Gucci shops; Hermès; Saint Laurent; Tiffany & Co.; Dolce & Gabbana; Moncler; Zara; H&M; Primark, and Century 21, which are among 350 retailers scheduled to open?

“Our experience  with West Edmonton Mall and Mall of America, two incredibly successful centers that are not in this market, is that the entertainment components guarantee that we deliver traffic,” said Don Ghermezian, chief executive officer of American Dream and parent Triple Five Group, owner of the centers in Alberta, Canada, and Bloomington, Minn., respectively. “People come, and they bring their families. They spend not hours, but days, and they shop. We know the formula works. It’s something we have incredible experience with and we’ve really gone crazy to deliver it here to the state of New Jersey.”

Ghermezian acknowledged that retail and the consumers’ mind-set were different in 2011 when Triple Five took over the project, which was then known as Xanadu. The Internet and popularity of Amazon have only continued to surge, so Triple Five pivoted, allocating 55 percent of American Dream’s space to entertainment, with the remainder earmarked for retail. The total cost of building the project was nearly $5 billion.

“The retail habits of the commerce era — everybody talks about the future of retail and the future of entertainment and how you merge the two. There really isn’t a center on the planet that has done it to the degree that we’ve done it here,” Ghermezian told WWD. “We have 17 major entertainment components at the center and more than half of the center is dedicated to entertainment.”

Manhattan’s retail scene has dramatically changed, too, with major retail projects such as The Shops and Restaurants at Hudson Yards with anchor Neiman Marcus, and Nordstrom’s women’s flagship that bowed last week. “I don’t think that’s competition at all. We’re a completely different animal. All of those projects are retail, retail retail. Nordstrom built a beautiful store,” Ghermezian said. “They’re great operators and they’re going to be phenomenally successful. Hudson Yards is a beautiful project and it’s going to be phenomenally successful.

“We’re not looking to compete with them,” he added. “We’re looking to add a whole other dimension to retail. We’re looking to feed off the 70 million tourists that come to New York every year and are looking for world-class shopping, world-class dining and entertainment, and want it in one place. In New York, you have to go from street to street, from Fifth Avenue to SoHo. At American Dream, it’s one enclosed environment.”

Ghermezian has said he anticipates luxury retail will do sales north of $2,000 a square foot, and the center itself, well in excess of $1,500 a square foot. He addressed the 50,000-square-foot flagship Barneys New York planned to open at American Dream before it filed for bankruptcy protection from its creditors. While Authentic Brands Group has a court-accepted offer in, and the auction has been canceled, other parties said they’re targeting Oct. 31 for entering bids.

“Barneys is going to play out,” Ghermezian predicted. “We don’t know where that’s going to end. Retail is 87

percent leased. We have several back-up plans for Barneys. There are several parties that are very interested and are waiting for the Barneys situation to unfold. We’re very hopeful. There’s still a very strong chance that we’ll execute with Barneys. We’ve got a lease right now, and they love the project. Daniella Vitale [Barneys’ ceo] is a very big proponent of the project and that’s something that they want to see happen.”

“Everybody just needs to be patient and watch and see what we deliver,” Ghermezian said. “We’ve executed with a number of incredible retailers, many of which we have not announced. Nobody needs to worry about the kind of retail we’re going to unveil in this project. It’s going to be as world class as it could be.”

“Whoopi is doing an event on Nov. 11,” Downing said. “She’ll be here on the property. She’s letting me into her collection of Art Deco furniture, and I’m filling her shop with some of her favorite pieces, as well as photography, movie posters and art works. I’m going to tell the story of Whoopi and her amazing journey.”

Conceived nearly 23 years ago by Mills Corp., the project to build the complex challenged developers that lacked the acumen and financing necessary to complete it. The Great Recession shut down construction altogether until Triple Five Group took it over.

New Jersey Gov. Phil Murphy on Friday toured the theme park with First Lady of New Jersey Tammy Murphy and gamely rode the Teenage Mutant Ninja Turtle Shellraiser roller coaster. He was heard to mutter, “Oh, s–t,” when the ride began its descent. “This is a journey that we’re all still on,” he said. “There’s a way to go with the other phases, but this is a great first step. I’m not an expert, but this feels like a success.

“This is a big day for New Jersey,” he added. “It’s been a long time coming; it’s huge for the state of New Jersey.”

DreamWorks Water Park will open next month, and Big Snow Indoor Ski & Snow Park in December. Other planned attractions include Kidzania, a live performing arts theater, a 300-foot-tall observation wheel, an aquarium, a Legoland Discovery Center and a dining terrace with about 15 restaurants, and the world’s only Munchie’s Food Hall. 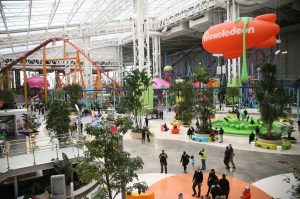 American Dream, the 3 million-square-foot entertainment and shopping center unveiled its Nickelodeon Universe during a preview for friends and family.  Evan Falk/WWD 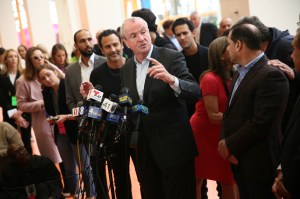