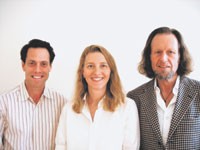 The brand, which takes its name from the 20th-century adventurers Martin and Osa Johnson, will focus on classic, denim and active-outdoor sportswear, and is to launch in fall 2006 with five stores. Company executives said each unit would be 5,000 to 7,000 square feet and carry women’s and men’s apparel as well as accessories and footwear.

“We feel we have a potential to do at least 300 stores in the next 10 years, and it could be a $1 billion opportunity,” Martin + Osa president Ken Pilot said in an interview.

The concept has been in the works for about a year and the stores’ debuts will be at better shopping centers, Pilot said. Executives didn’t disclose locations or provide details about the merchandise or interior design of the stores.

But make no mistake, this isn’t a test launch for American Eagle, which has a core shopper who is 15 to 25 years old, Pilot said.

“It’s the customer in transition,” Pilot said. “From school to career, from being single to being [part of] a couple.”

The vertical retailer, based in Warrendale, Pa., has had positive same-store sales for 21 consecutive months. American Eagle has succeeded at selling its own brand of preppy-inspired looks.

The company posted a September same-store sales increase of 13 percent compared with the year-ago period. Total sales for September increased 20.9 percent to a record $183.8 million, compared with $152 million for the same period the previous year. Sales for the 35 weeks ended Oct. 1 were up 28.6 percent to $1.39 billion, versus $1.08 billion for the comparable period last year.

“Martin + Osa represents a long-term growth opportunity for our company,” chief executive officer Jim O’ Donnell said in a statement. “It will give us access to the sportswear market for an entirely new generation of shoppers, outside of AE’s 15- to 25-year-old target customers.

“While operating separately from our successful American Eagle brand, Martin + Osa will embody the same virtues — namely, excellent fit, quality and style — that have made AE a leading specialty retail brand,” O’Donnell said.

The payoff is potentially big for specialty retailers launching spin-offs. If the concepts are a hit, the strategy creates cachet for retailers trying to meet the changing needs and tastes of consumers.

But it is risky business. For every successful concept launched over the past 20 years, there have been just as many flops, including Chico’s Pazo and Wet Seal Inc.’s Zutopia.

“I think the market [for this customer] is really underpenetrated at this point,” said Jeffrey Klinefelter, senior retail analyst at U.S. Bancorp Piper Jaffray. “There are a small handful of concepts focused on the post-teen consumer, and it’s absolutely where the growth is going.”

Klinefelter said this market is one to jump to for savvy, mall-based retailers.

“Looking at the national demographic trends, within the next five years, the greatest percent increase in new customers entering an age group will be the 20- to 23-year-old demographic,” he said.

As for customers over 35, Klinefelter said this category has consistently performed well, and, with the exception of Chico’s, is barely being addressed by specialty retailers.

American Eagle, however, hopes to generate a hit by tapping into the adventurous spirits of the new concept’s namesakes for creative and business inspiration. “[The spirit] is fun, romantic adventure with an outdoor orientation,” Pilot said of the brand’s name.

Martin + Osa “is a union of everything that is right about classics, denim and active sportswear,” Roger Markfield, vice chairman of new concept development for American Eagle, said in a statement. “To put it simply, we’re using denim and sport inspiration to design fun and sport back into sportswear.”

Martin and Osa Johnson were a couple from Kansas who wrote books, lectured and made films about their travels through East and Central Africa, the South Pacific Islands and British North Borneo. They studied the wildlife and the people of the regions. The Martin and Osa Johnson Safari museum in Osa’s hometown of Chanute, Kan., has preserved their achievements.

Although the Johnsons’ voyages focused heavily on safaris, Pilot was emphatic that the American Eagle concept would not have a safari theme or sell safari gear, like the Banana Republic of the Eighties. Pilot, who was president of Gap Inc., which owns Banana Republic, worked at Gap from 1989 to 2002. He joined American Eagle this year after a stint as president of factory stores and retail concept development at Polo Ralph Lauren, starting in 2003.

While Pilot declined to give details of the merchandise, he did offer a few teasers, saying the brand was “more about day than night, more about outdoors than in, and more style than fashion,” with an emphasis on classic silhouettes. Denim will be a key component.

American Eagle has hired Charles and Michele Martin, the design team behind the launch and creative development of Abercrombie & Fitch, to head design for Martin + Osa. Michael Neumann Architecture, which has designed stores for Polo Ralph Lauren, Coach and Lilly Pulitzer, among others, will handle the design of the stores.