American Eagle Outfitters is reopening for business in select locations — although for now, things will look a little different.

Hand sanitizers, face masks, employee temperature checks, open space, touchless payments, options for curbside pickups and other enhanced cleaning measures will be the new norm — as they are for most retailers that are reopening stores.

“People do want to go out, but they want to do it in a way where they feel safe,” Jay Schottenstein, executive chairman of the board and chief executive officer of American Eagle Outfitters Inc., told WWD. “When we closed the stores, we knew that when we reopened the stores, it wouldn’t be business as usual. We knew we had to do things differently than we had in the past. And the first thing we had to do was to figure out how we reopen the stores and protect our associates and protect our customers at the same time.

“The new in-store experience will be secure in making our customers feel safe,” Schottenstein continued. “As time goes on, we’ll give them other experiences as soon as everyone is able to start being close again. Hopefully, [social distancing] won’t last long. But we’ll have to have that flexibility though.” 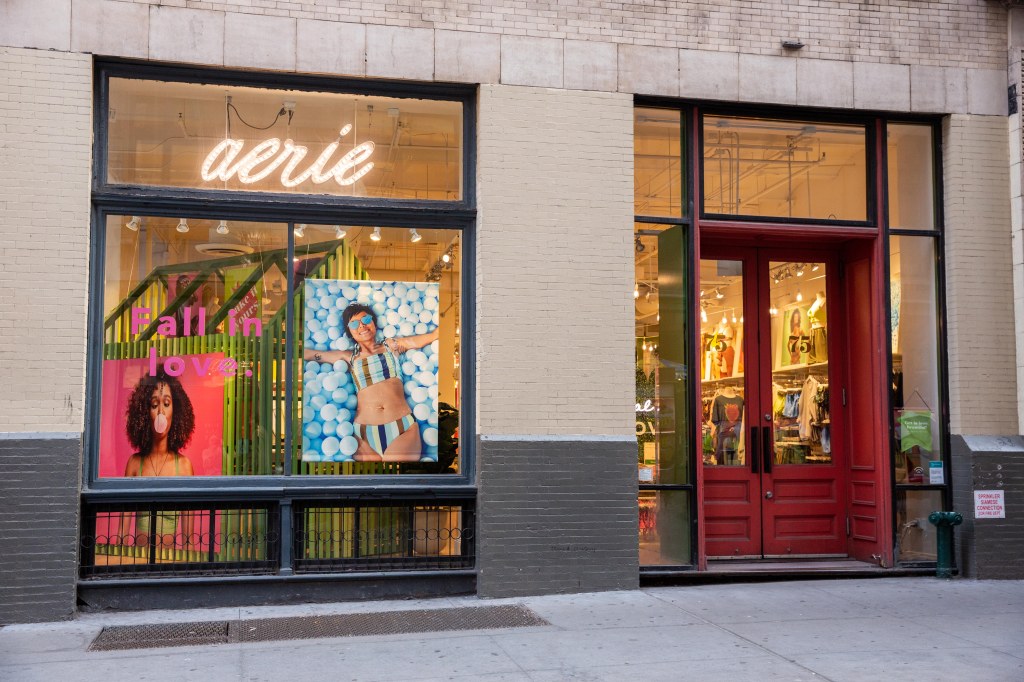 The retailer opened about 43 stores this week — in Texas, South Dakota, North Dakota, Missouri, Arkansas, Florida, Tennessee, Georgia, South Carolina and Alabama — a mix of the American Eagle and Aerie brands, many of them in malls.

That’s just a fraction of the company’s 1,000-count store fleet. But Andrew McLean, chief commercial officer of American Eagle Outfitters, said the company is looking to open about 600 locations by the end of May.

To do that, McLean said his team has been investigating what the company needs to reopen ever since it temporarily shuttered stores in North America in mid-March.

“Clearly, at the top of the list was health and safety, keeping social distancing,” he said. “But also, really creating a warm, bright and safe atmosphere; that was going to be critical. What it comes down to is that there wasn’t one thing that stands out that we’ve done. But rather there’s a series of small steps that add up that really connotes a safe environment from the moment you walk up to the store.”

The complete roadmap for reopening, however, is not so small. It includes fewer fixtures in stores to increase social distancing, plexiglass barriers between cashiers and customers, welcome stations in stores, providing free hand sanitizers and face masks and the option for curbside pickup if shoppers don’t want to enter stores.

Fitting rooms will also be cleaned each time a customer exits and shoppers will be asked to drop off the clothes they tried on in a box, which will be processed 24 hours later so associates don’t have to touch the items. A greeter at the front of the store will limit the number of people who can enter at once. McLean said the retailer is aiming for 200 square feet of space per person while in stores.

The company is also looking into testing associates for the coronavirus and is developing a band to be worn by employees that will track each person’s temperature through his or her shift.

Schottenstein added that — thanks to robust online sales during the shutdown in March and April, and the use of inventory from about 200 stores during that time to fill e-commerce orders — inventory throughout the stores will be fresh when they reopen.

“It’s not going to be old goods,” he said. “And I believe that we’ll be one of the few retailers in the country that when it comes to summertime, we’ll have all our fall goods be in place at the proper time, in July.

“I think the biggest thing is, stores should have responsibility,” Schottenstein said. “Whoever opens, if they open their stores, and they just open up like they were before, they’re not doing the country and the people a service. Those retailers that take the time to make sure that their people, that their associates are safe, that’s number one. At the same time, make sure it’s safe for your customers when they walk in. That’s the way business should be run.”

Meanwhile, Tailored Brands Inc., parent company to Men’s Wearhouse, is also preparing for the phased reopening of its fleet.

Late Thursday, the retailer said it expects to open about 300 Men’s Wearhouse, Jos. A. Bank and K&G stores in the U.S. by Memorial Day, in accordance with federal, state and local guidelines. The first stores will open this week in Georgia and Texas. In addition, the retailer is reviewing plans to open its Moores Clothing for Men stores in Canada.

Tailored Brands also plans to implement new safety measures when stores reopen, such as temperature checks for employees, the use of hand sanitizer and masks and social distancing protocols, including limiting the number of people in a store at once. All three chains will offer contactless payment, and Men’s Wearhouse and Jos. A. Bank stores will also offer curbside pickup.