The retailer has put a laser focus on children as it preps for the all-important back-to-school selling season. 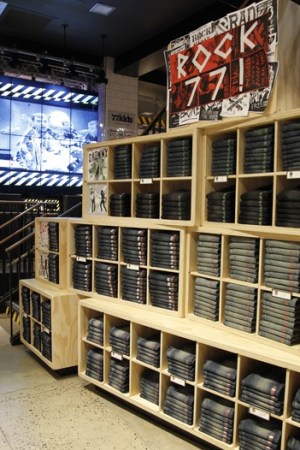 NEW YORK — American Eagle Outfitters has put a laser focus on children as it preps for the all-important back-to-school selling season.

Today, the Pittsburgh-based specialty store chain will open its 22nd 77kids store — the Style Lab at its Times Square flagship in New York.

The company launched 77kids — named in honor of the year American Eagle was founded — three years ago. At first, the offerings were only online, but the first store opened in Pittsburgh a year ago, according to Schumacher. Since that time, the company has learned what best appeals to its target customer of boys and girls around the brand’s target age of 10.

“You have to be a game changer in kids because there’s so much out there in the malls,” she said, noting that American Eagle worked to create “a very strong point of view for the stores.”

All the units offer interactive elements to amuse young shoppers, including touch screens where they can add their photo into a “look finder” to see how they’ll look in the key trends of the season, as well as gender-specific “denim canyons” for jeans.

The Times Square store takes the fun quotient and “really amps it up,” Schumacher said.

Among the special elements at the store is a motion-activated staircase that lights up as customers walk down to the kids section on the lower level. Throughout the 4,200-square-foot space, there are levers or buttons that kids can control to watch the simulation of a T-shirt being printed, jeans being washed and dried, or the company’s various fits and washes of denim on a conveyor belt. “It’s the best way to show our denim,” Schumacher said.

Kids can also put themselves in a music video that will be projected on screens inside and outside the store. The video can then be e-mailed to friends and family.

“All the stores have fun elements, but we took it to the next level here,” she said. Even so, the real focus is on the merchandise.

“We love all the bells and whistles, but we know that it all starts with product,” Schumacher said. Evident in the mix is a rocker influence, military-inspired elements and lots of sparkles for girls. The store features an assortment of apparel and accessories that ranges from denim overalls and graphic Ts to dresses and leggings. The assortment is split between boys and girls and the store also includes an area for little77, apparel and accessories for newborns to 18 months that includes pleather jackets and washed patterned onesies.

There are also toys, books and footwear from third-party brands. “The clothing we do ourselves,” Schumacher said, “But with toys and other things, we go to the experts.”

Schumacher said because of the success the company has seen with 77kids, the rollout of the concept will continue next year. “We will continue to grow,” she said. “We’re working on plans now.”