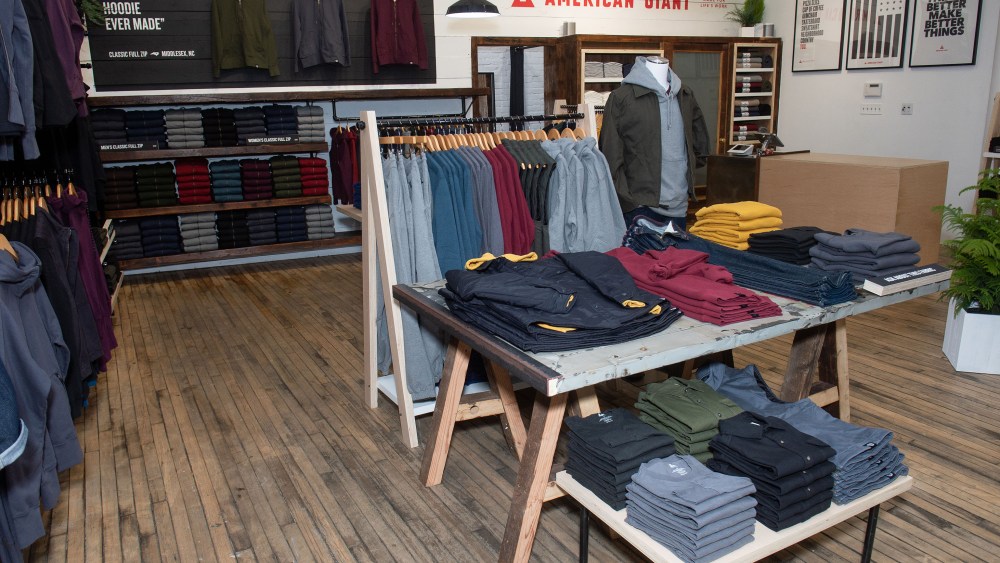 The 1,000-square-foot unit marks the brand’s second brick-and-mortar location. The first opened on the ground floor of its San Francisco headquarters earlier this year.

Bayard Winthrop, founder and president, said since the store soft opened on Nov. 1, sales have been above plan. The most popular pieces have been the men’s mechanic’s jacket, the hooded women’s jersey dress and the brand’s signature T-shirts, hoodies, sweatshirts and sweatpants. Men’s denim, a new addition, is also doing well and a women’s jean is launching this week.

Winthrop, a former investment banker, founded American Giant in 2011 on a belief that consumers still appreciated high-quality American-made brands. He created a hooded men’s sweatshirt, made in America, and thanks to a mention in Slate magazine and then The New York Times that called it “the greatest hoodie ever made,” he was on his way.

In fact, the initial demand was so high that it took the company two-and-a-half years to catch up.

Today, American Giant has expanded into a number of complementary categories of casual basics, all made in the U.S. and sold at an affordable price. Premium Ts are $38, full-zip hoodies are $108, sweatpants are $88, women’s joggers are $88 and the hoodie dress is $98.

“My point of view was that customers still wanted great quality American brands,” Winthrop said. “But the narrative around U.S.-made was not being accurately presented.”

Although American Giant is still primarily an e-commerce brand, opening stores provides a different perspective. “For most e-commerce businesses, they think that’s the be-all-and-end-all,” he said. “But two-and-a-half years ago we put out our first catalogue and presented our line to the customer in an entirely different way — and it was hugely successful.”

So when the ground-floor space at its San Francisco headquarters became available, he took the plunge into retail. Winthrop said there had been a small showroom space at the offices that customers were forever clamoring to visit so he was hopeful the store would do well. “We opened in May and it’s been raging for us,” he said.

It’s also helped shine a different lens on the business.

“With a digital business, you often miss stuff because people like to touch and feel and try things on,” he said.

Winthrop opted for New York for the second store because it’s the brand’s largest market, he said. American Giant took a short-term lease at the space with an option to extend if the store is successful.

The store made “minimal investment” into the build-out of the space, he said, which was intentional. “We’re a lean company and we want to let the product speak for itself,” he said.

That being said, the store still calls out that everything is made in America, and includes the cities where much of the merchandise is made such as Middlesex, N.C. A map of the country shows in red the states where American Giant sources its materials and manufactures its line.

Looking ahead, Winthrop said he hopes to add another three to five stores over the next 18 months in cities such as Houston, Dallas, Chicago and Austin, Tex. But he’s also eyeing smaller cities including Pittsburgh and Nashville where he believes the made in America message will resonate even more strongly.

The expansion will be funded by the company’s sales as well as what Winthrop describes as American Giant’s “patient and committed” investors, which include Don Kendall, the former chief executive officer of PepsiCo, who is the company’s lead investor.

He said Kendall has been an invaluable source of business advice to him since starting the brand. “He told me to do what I had to do to meet the demand, but not to screw around with the product,” he said. “He’s been a steadying hand for me since the beginning.”

So Winthrop will continue to stick with American Giant’s mission of producing quality basics made in America and slowly add to its assortment. The denim, for example, took nearly two years to move from idea to market. Eventually, Winthrop would like to add more woven bottoms as well as accessories — but slowly.

“The business has momentum and we don’t want to screw it up by stepping on the gas too much,” he said.