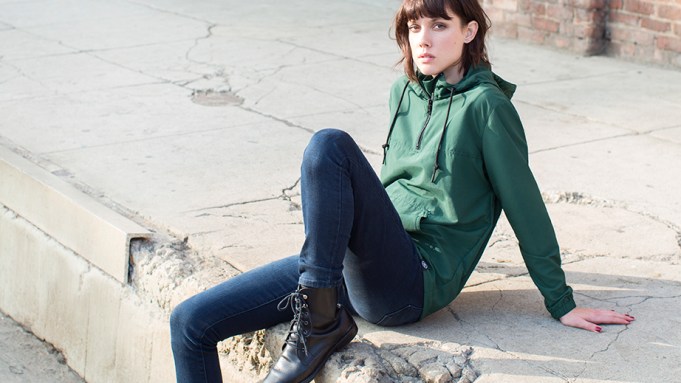 American Giant is marching ahead with its Made in America strategy, growing its manufacturing base and expanding into new products that bow on Monday.

Bayard Winthrop, the company’s founder and chief executive officer, said, “In the last year we’ve broadened the product mix and received tremendous customer response. We knew we were ready for a thoughtful and measured expansion.”

For holiday, American Giant introduced several new products that included bottoms for the first time and new tops styles such as a waffle-weave cotton Henley shirt, a button-down cotton work shirt and what it called “The Pant” — a black cotton and spandex legging.

“We want more for the brand, moving into new categories that can open opportunities and improve our financial performance after a big increase in 2016,” Winthrop said.

Making their debut on american-giant.com and through its catalogues are a wind and water-resistant nylon coach’s jacket with a heavyweight cotton lining for men and women, trimmed with grommets, a reinforced elbow patch, custom metal snaps, a custom rubber-tipped drawcord and a locker loop at $89, as well was an anorak for men and women selling for $79 and also made with wind- and water-resistant nylon, reinforced elbow patch, custom rubber-tipped drawcord and a gusset at neck that provides coverage and a mesh vent detail at the back for ventilation.

Also bowing are cotton knit dresses, such as a tank dress being manufactured in Los Angeles. In addition, a cropped version of the ponte knit yoga-style pant is being added.

“The common factor throughout all our clothing is that it’s made from high-quality fabric, it fits well and can be worn day in and day out because that’s what young people and people in general want today,” Winthrop said. “We take time and invest to make sure we’re making a great fashion item, with a great fit using great fabric.”

Focusing on sweatshirts the first few years after starting up in 2012, including a hoodie declared the “greatest sweatshirt ever” by some social media outlets, American Giant introduced a T-shirt line last spring that performed beyond expectations, Winthrop said.

The company owns and has exclusive contractor relationships with manufacturing facilities in North Carolina that have been modernized with new equipment and a switch from batch to modular manufacturing and are operating at full capacity.

As a result, the brand has started manufacturing the pants at contract facilities in Los Angeles, work shirts at a plant in Philadelphia and the nylon program at a former North Face facility in Oakland, Calif.

“It’s no longer a question for us of whether to stay with a Made in America strategy,” he said. “If anything, it’s more viable than ever.”

Next on the drawing board is to expand more into woven shirts and bottoms, such as chinos and denim. Winthrop said even though expansion into wovens presents more challenges than the more established knits business in the U.S., he is committed to making it work — and making it in America.