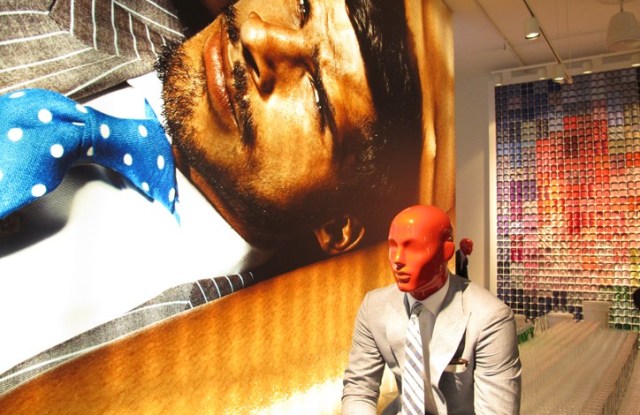 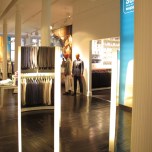 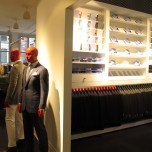 The Amsterdam-based company, which operates 35 stores in Europe and Asia, has taken 5,000 square feet at 453 Broome Street to introduce its line of European-style suits, dress shirts and furnishings to the American market.

Founder and chief executive officer Fokke de Jong said that while the company could have taken space among the other traditional men’s retailers on Madison Avenue, its focus on a more modern, independent customer was the reason for its choice of a downtown location.

“We looked all over New York,” he said, “but we really don’t fit in with the more-established brands. Our customer has to work and function within the system, but not surrender to it. They’re more independent people, so SoHo was good for us.”

De Jong declined to provide an estimated volume figure for the unit, saying: “We really don’t have a clue. We need to get our feet wet here and see what happens.”

Ditto for a retail rollout in the States. He said until the company gauges the acceptance of the SoHo store, there are no plans for adding additional units in this country. “We have a good feeling about it, but this isn’t a concept where you can roll out 30 or 40 stores in two years.” However, units in Milan, Düsseldorf and Shanghai are planned to open before the end of the year.

Nish de Gruiter, who heads the U.S. division of Suitsupply, said the store hangs 800 suits, “and we have another 800 in the back.” There are 600 shirts in a full-wall display. Between 600 and 700 ties are also merchandised in cubbyholes on another wall. There is a small smattering of upscale sportswear including sport coats, sweaters and cotton slacks. Belts, cuff links, socks and shoes round out the assortment. There is also a separate made-to-measure room where customers can order suits or shirts.

Off-the-rack suits retail for $399, $459 or $639 depending upon fabric and construction. They are manufactured from Italian super 100s or super 150s fabrics and produced in Europe, de Gruiter said. Construction is soft, the garments feature a lot of sartorial details such as pick stitching, and the fabric choices are innovative. “It’s not just your average navy or gray suit,” de Gruiter said. De Jong said the suits may look modern but feature “old-fashioned techniques” on the inside such as horsehair and canvas construction. “They’re fitted, but not locked up,” he said. “They’re very comfortable.”

Suits are offered in European sizes from 44 to 58 and in longs and shorts. The silhouette is slim and contemporary. In-stock shirts, priced at $99, are offered in a variety of patterns in sizes 14 1/2 to 17 1/2. “We can fit a big group of people,” de Gruiter said.

Made-to-measure garments are priced at $700 to $1,000 and take seven to eight weeks to produce.

In the center of every Suitsupply store is a tailor who can alter an outfit for a nominal fee while the customer waits. “When you think of a tailor, you think of an old guy with a needle and thread,” de Gruiter said. “But we think our tailor is cool — it’s art.”

Having a well-trained staff is also key to Suitsupply’s success worldwide, de Jong said. “We’re a destination store. We’re not on the high streets, so it’s very important to have a well-educated staff.” On Broome Street, for example, the store is on the second floor, not street level. The London unit is near Savile Row, not on it, and the planned Milan unit will be close to the famed Via Monteleone.

De Jong said Suitsupply doesn’t do a lot of advertising, but each season produces marketing campaigns for its Web sites and store. In its home country of Holland, some outdoor advertising is done as well.

A few of the images have already caused controversy in the States. Like Skin, its current campaign, features naked women draped over men in suits. Earlier campaigns have been similarly racy.

De Jong acknowledged that some of the images may take people by surprise, but that’s “the essence of the brand.” He also pointed to a less-controversial campaign entitled Ambition where the company went to the slums of Cape Town, South Africa, and asked people their definition of ambition. “There were some really compelling stories,” he said.