Once again led by descendants of its founder, the brand is riding high on the fashion demand for all things Americana. 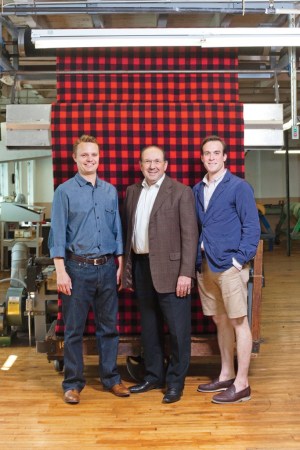 At a time when heritage is a fashion-industry buzzword, a term associated with Brooklyn hipster artisans and new brands working hard to cultivate the patina of age, Woolrich has a quality that makes it stand out: It’s the real thing.

This story first appeared in the June 18, 2012 issue of WWD. Subscribe Today.

The Woolrich story dates to 1830, when English immigrant John Rich II built his first woolen mill next to a picturesque stream in the rural Pennsylvania town of Little Plum Run. With that as his base, he visited lumber camps in the area and sold woolen yarn, fabric, socks and coverlets from a mule cart. Over the years, the company he founded with Daniel McCormick would be credited with putting the first zipper fly in men’s trousers, creating the iconic buffalo-check shirt and railroad vest, and weaving blankets to keep Union soldiers warm during the Civil War.

Fast-forward to 2012. Earlier this year, Woolrich, which has the longest continuously operated woolen mill in the U.S., named two young offspring of John Rich II to steer the company into the future: Nicholas Brayton, 33, a seventh-generation descendant, serves as president, and his second cousin Joshua W. Rich, 26 and representing the eighth generation, is vice president of international. They share a large conference room in the brick office building directly opposite the mill in Woolrich, Pa., with John Ranelli, an industry veteran from outside the family who serves as chief executive officer.

Despite Woolrich’s storied past, its new management team is looking forward rather than back. In fact, the triumvirate is setting out to quadruple sales over the next five years—which would increase the business from $250 million to $1 billion—by expanding and elevating Woolrich product offerings, broadening overseas distribution and opening stores around the world. “The brand is thriving, but the ceiling is very high,” says Brayton. “There’s a real opportunity to take it to the next level.”

The expansion is expected to be self-funded, and Ranelli says the company’s shareholders and board of directors are united in their support of the growth plan. “They’re all on the same page,” he says. “All the energy is mustered in the same direction.”

With the exception of Ranelli, the board is made up primarily of family members. Eighty percent of the company’s shareholders belong to the Rich and Brayton families. Outsiders hold an equity stake of about 5 percent. “The company has been privately owned since its inception,” says Brayton. “It’s quite a legacy.”

Brayton is the first family member to lead the company since his father, Roswell Brayton Jr., died in March 2007. A former director of the domestic licensing business, he now oversees the day-to-day operations of the business with Ranelli. Rich was formerly Woolrich’s business development analyst. He is relocating to Italy to serve as chief liaison with WP Lavori in Corso, the company’s European partner, which is based in Bologna, Italy, and produces the fashion-driven Woolrich John Rich & Bros. and Woolrich Woolen Mills collections. The American company also produces Woolrich Outdoor sportswear and outerwear, which Rich calls “our bread and butter, and the main business in the U.S.”

Woolrich’s link with WP Lavori has been long-standing. Beyond the two Woolrich labels, WP Lavori holds the worldwide license for B.D. Baggies and Avon Celli, and various distribution rights for Barbour and Blundstone. It recently added the Baracuta outerwear brand to its stable of licenses. “They came to us probably 30 years ago, because they wanted to distribute our product in Italy,” Brayton recalls. In 1985, WP Lavori started selling Woolrich products in its stores in Europe, and 10 years later Woolrich granted the firm wholesale distribution rights for Italy, a deal that was extended to include all of Europe in 1998.

Also in 1998, WP Lavori’s creative director Andrea Cane came up with an idea for a new label, John Rich & Bros. “It’s a more metropolitan and contemporary collection,” Rich says. “It is in keeping with our outdoor aesthetic, but the weight is changed to be more relevant to a cosmopolitan audience.” The brand has also been sold in select stores in the U.S. since 2010.

Cane later approached Japanese designer Daiki Suzuki, well known in the outerwear business, to work on Woolrich Woolen Mills. That line, now designed by Mark McNairy, was introduced in 2006. “These guys have done a wonderful job integrating the Italian licensee and the American business,” says Ranelli of Rich and Brayton. “They have the energy, vision and boldness to achieve their dreams for the Woolrich brand on a global basis.”

Today, Brayton says, sales in the U.S. and Europe are running about even. About 75 percent of overall sales come from wholesale, 15 percent from retail and 10 percent from the mill and U.S. government contracts.

John Rich & Bros., whose business is primarily in Europe, Japan and Korea, and the Woolrich Outdoor labels, sold in the U.S. and Canada, each account for a little more than 47 percent of the company’s volume. The upscale Woolrich Woolen Mills collection, distributed in the U.S., Asia and the U.K., accounts for 5 percent of sales. Brayton describes it as a “niche product.”

“The challenge is how to introduce these labels to different regions,” Rich adds.

Ranelli calls the expansion plan “low-hanging fruit. We’re going to build in areas we’re already in and then move onto other regions such as Eurasia, including Australia.” Specifically, they hope to bring the Outdoor collection to Northern and Western Europe, and all labels to Eastern Europe, Asia and Australia.

In its wholesale business, Woolrich plans to add new labels and product lines, including wool accessories such as bags and wallets. “We’d like to have different labels for different end users,” Rich says. “You can expect to see us expanding our product array in a meaningful way in about three years.”

On the retail front, the company has exited the outlet business, a retail category where it had once operated 26 stores. “We’re trying to elevate the brand,” Brayton says.

The focus has shifted to full-price stores. Woolrich currently operates two in North America—a flagship in Woolrich, Pa., and another in Knowlton, Quebec, Canada. Overseas, there are stores in Stockholm, Sweden; Forte dei Marmi and Cortina d’Ampezzo, Italy, and Sylt, Germany. The company also aims to open stores this summer in London and Seoul. A full-price store is also scheduled to open next year in New York City.

The plan is nothing if not ambitious. It helps that the executive team is confident.

“This company has a lot of roots in manufacturing, but we’re reshaping it as a marketing company,” says Brayton.

Even so, the team has abiding respect for Woolrich’s history. “There’s 182 years of manufacturing experience, and that remains the backbone of the company,” says Rich. “That mill is more than just the mill across the street. It represents the values of family and community. The fabric of that mill runs through every person here.”