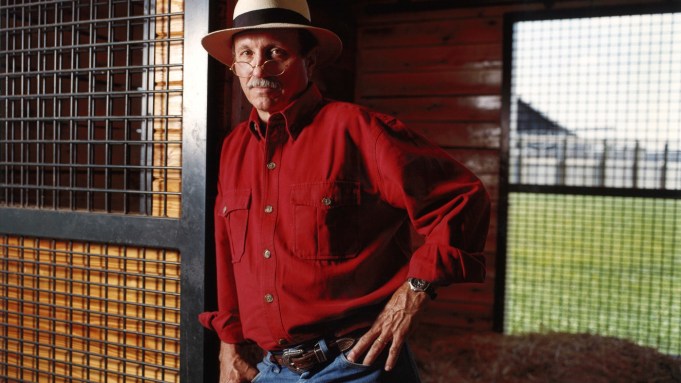 “I don’t know what I am looking for until I see it,” said John Peterman, the dreamy founder of the J. Peterman Company.

That’s true when he travels the world seeking unique, quirky product for the catalogue’s signature vintage, almost Bohemian, aspirational look. But as he shows off the 2018 holiday kilts, tan leather squire jackets and WWII motorcycle dispatch coats, it’s clear Peterman knows what he’s looking for from the business — a comeback and possibly selling it or a piece of it.

“Peterman is doing what he’s always done, but suddenly he’s being recognized again,” said Peterman, at the Hotel Elysée Hotel in Manhattan, where last week he pitched camp for media briefings. “People are looking for content. We are the original content company. We always write a story about where we found something and why it’s good.”

Regarding selling the business, “If an attractive investment were to present itself, I would certainly consider it as long as the J. Peterman Company stayed intact,” he said.

From Peterman’s perspective, what’s old is new again. “It’s all going around in a big cycle. Young people are (into) discovering things. That’s why vintage is so cool — it’s a discovery.” He’s dressed in a J. Peterman Annapolis black button shirt, blue jeans, one of those squire jackets, and J toe custom cowboy boots received from a friend who had a stake in Seattle Slew and a boot factory by the Mexican border. “They call them roach killers.”

But what about the relevancy of those kilts he’s advocating for holiday? “Some of the bravest men wore kilts into battle. It’s not a sissy thing,” said Peterman. “Traditional kilts are associated with bravery. You are making a statement.

“I went to Scotland a year ago. We got some good tartan plaid kilts. We’ll show full kilt outfits for holiday — with a vest, a formal shirt, a jacket, and a large scarf worn over the shoulder.”

Displaying a black watch tartan kilt, Peterman says, “For American men, this is what you want. We ran them a year ago and sold them out, several hundred. You wear them to a benefit, or a holiday party. I wore my black watch to a big benefit in Lexington, Ky.,” where he lives with his wife, Audrey and their two dogs. “Lo and behold, another guy came in wearing the same thing. That’s why we’re doing a royal Scot plaid this year. We’re adding some variety to the kilts.”

The J. Peterman Co., launched in 1987, has been resilient, surviving two bankruptcies, one of its own in 1999 and one in 2000 when it was owned by the Paul Harris Co. From 1995 to 1998, it was catapulted into the public eye by the “Seinfeld” television series where Peterman was satirically portrayed by John O’Hurley who eventually became a partner in the catalogue but ultimately left.

After the “Seinfeld” series ended in 1998 (reruns can be seen in syndication) the J. Peterman business seemed to fade, though it was always in business. For awhile, Peterman stepped back from actively running the company, which is when the catalogue attempted to capitalize on its “Seinfeld” popularity by lowering prices and broadening the offering to the masses. “We thought the brand was so famous we could sell less expensive stuff. It didn’t work. We lost a lot of customers.” A few years ago, Peterman returned to actively running the business to get it back on track and restore its sophisticated flair.

Others also believe that it could be J. Peterman’s moment, with some sharper marketing, stronger social media and possibly a pop-up or two. “Things are so uncertain and dystopian that people are buying into the past, when times were easier,” observed Roseanne Morrison, fashion director of the Doneger Group. “If you look at the silhouettes, they’re reacting to trench coats, cords, suspenders, Irish rollneck sweaters, balmacaans  and kilts and a lot of the old-school brands, like Bogner, are having revivals.”

The 77-year-old John Peterman was born in West Nyack, N.Y., attended Holy Cross College where he played on a baseball team that went to the College World Series in 1962 and 1963. He played second base in the minor leagues for the Pittsburgh Pirate organization from 1963 to 1965 and was a member of the U.S. Marine Corps Reserve from 1963 to 1969. He worked in sales and sales management for General Foods Corp., Castle and Cooke Foods and International Spike Inc., and served as an independent marketing consultant.

Peterman has been an iconoclast in the catalogue business, dubbing his catalogue “the owner’s manual” and featuring just one or two items per page each depicted through a painting and romanced with a story, whereas catalogues typically show multiple items per page via photographs and very little copy. For example, for Peterman’s lambskin dispatch rider’s coat, a war scene is set: “The outlook is bleak. Deliver the ‘vital’ message to the 2nd Infantry commander before the enemy reaches the Franco-Belgian border….”

Perhaps the best story was Peterman’s first — a full-length horseman’s duster coat he purchased in Wyoming. “It had all the character, romance and adventure I dreamed about,” said Peterman. He wore it wherever he went and people noticed. So with $500, a 1/6-page ad in the New Yorker, and only the horseman’s duster for sale, Peterman, along with his partner Don Staley, launched the J. Peterman Co. and the duster became the logo. J. Peterman grew into a $75 million enterprise by 1998, but is now down to “in the upper $20 million range and growing,” he said.

Today, the catalogue sticks to its unconventional format, pretty much unchanged from the beginning. There’s still apparel, outerwear and accessories for men and women depicted using watercolor renderings and accompanied by the stories often with literary references. There are eight seasonal issues mailed during the year for spring/summer and fall/holiday, and two sale catalogues in July and January. J. Peterman sells items, rather than collections, with 250 to 350 items depending on the season. Most of the items are discovered by Peterman and his small team of merchants, including senior vice president of women’s merchandise (and John’s wife) Audrey Peterman and men’s merchandise director Micki Wright, traveling in Europe and South America as well as India and the Far East.

One change is with a web site. It does have some photos of product shown on people, accompanying the paintings of products. He said that through surveys, the company learned that the “next generation millennial” consumer wants to see details and “on figure” shots of products to better understand finish and fit. Also, there was once an attempt to open stores, including one in Grand Central Terminal, but they closed. Currently, the only brick-and-mortar presence is a warehouse outlet store in Blue Ash, a suburb of Cincinnati, where the company is based.

The business is 80 percent owned by John Peterman. The remaining 20 percent is owned by family members and outside investors. Peterman reacquired the brand and its assets in 2001 after Paul Harris went bankrupt.

“For 30 years, The J. Peterman Company has taken the road less traveled, and I’m confident that the road forward will present new opportunities to take risks, break a few rules and continue to set our brand apart,” said Peterman.

Asked how the company is doing, Peterman replied, “We’re here. Every day is a good day.”