Anthropologie will open its fourth store in Manhattan on Friday. 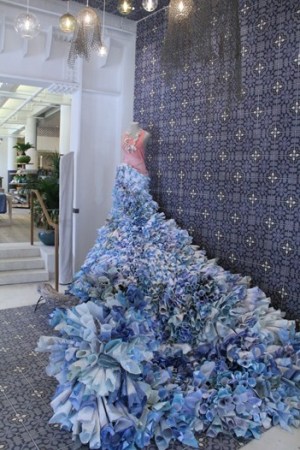 NEW YORK — Stepping up its Manhattan presence, Anthropologie on Friday will open its fourth store here, at 75 Ninth Avenue. The 10,000-square-foot store is in the Chelsea Market, a popular urban food court with eateries such as 202 by Nicole Farhi, Amy’s Bread, Buddakan and the Fat Witch Bakery.

This story first appeared in the April 13, 2010 issue of WWD. Subscribe Today.

Anthropologie’s approach to product and design is as individual as ever at the Chelsea Market. The store will carry an array of exclusive products from local artists, designers and artisans. “In New York, we can really show our ability to localize,” said Wendy Wurtzburger, co-president and chief merchandising officer of Anthropologie. “This can be really different than a Rockefeller Center store and Flatiron store and a SoHo store. Chelsea, with the High Line and galleries, has such a different feeling. It’s a great way for us to express ourselves in the community. We have a lot of hand-painted things and things with texture and a lot of one-of-a-kind items in home, apparel and accessories. We thought it was a great time to tailor the assortment and feature some of those special things.”

One-off dresses by the SOR Select label of NoLIta boutique Some Odd Rubies are an example of exclusive items to be found at the store. The redesigned vintage dresses with a slightly edgy feel range in price from $200 to $400. There are also exclusive one-of-a-kind romantic dresses made from vintage fabrics by Lorraine Kirke of the West Village boutique Geminola. A sleeveless linen A-line dress with cutouts and embroidery is $468; a dress consisting of different layers of lace, $498, and a blue lace dress with a vintage velvet tie, $498. Wurtzburger said the retailer is also “working with Geminola collaboratively to manufacture dresses that will be carried in all of our stores.”

Another line sold only at Chelsea Market is Carol Horn’s hand-painted white and blue jeans. “She’s a painter and lives on the West Side,” said Wurtzburger. “I started thinking this would be fun to put in Chelsea Market.”

For the Chelsea Market store, two Anthropologie buyers found at a Paris flea market an antique jewelry collection from Woloch, a defunct jewelry house that created designs for the Chanel runway. In the home area, New Orleans-based artist Ashley Longshore, who is known for her bold use of color, hand-painted latte bowls for the store.

If Anthropologie once viewed itself as a destination, that’s no longer true. Wurtzburger said the goal is “to be your local Anthropologie. There are so many great neighborhoods in New York. There’s a lot of business to be done in New York. There’s opportunity on the Upper West Side and Upper East Side. We still think there’s opportunity in the five boroughs, especially in Brooklyn. There are a lot of great neighborhoods and we’re not just one look. We even feel like we could go into different neighborhoods and be exciting and new, while keeping our existing stores exciting and new.”

Anthropologie is reportedly close to signing a lease to open a store at 1115 Third Avenue. Wurtzburger declined to comment, nor would she discuss sales volume for the Chelsea Market store.

The two-level store can be entered from the market or a street entrance. It has an underwater-nautical theme with a canopy of blue and white Moroccan tile at the entrance and lining the staircase. A mannequin in the tile “foyer” wears a shell necklace and dramatic dress — fit for a mermaid — made of rolled papers dipped in shades of blue and green paint. From the ceiling, glass globe light pendants are hung, some covered with fisherman’s netting.

“This store has a lot of history and soul because it was the Nabisco Baking Company,” Wurtzburger said, referring to Chelsea Market’s original tenant. “It allowed us to layer something modern on top of something old.” Existing steel beams and columns frame the 15th Street entrance, exposing the structure of the building. Floors are made from reclaimed barn wood.

Offbeat fixtures include an 1890s typographer’s work cabinet from a French printer. A rough-hewn wood dining table displays plates painted by the artist Nathalie Lete. Her first apparel collection of dresses and a skirt with hand-painted floral and other fanciful designs will make its debut at the store.

The lower level features a large boat made from pieces of found wood and has a sail that reads “Destination Unknown.” The floor houses loungewear, intimate apparel, bedding and bath merchandise.

Throughout the store, topiaries of New York City landmarks include a six-foot Chrysler Building, the Brooklyn Bridge and a ubiquitous New York City roof water tower. There’s also something closer to home, the High Line, rendered in moss.

“This neighborhood inspired us,” Wurtzburger said. “It got our minds going in terms of doing things that are really different.”