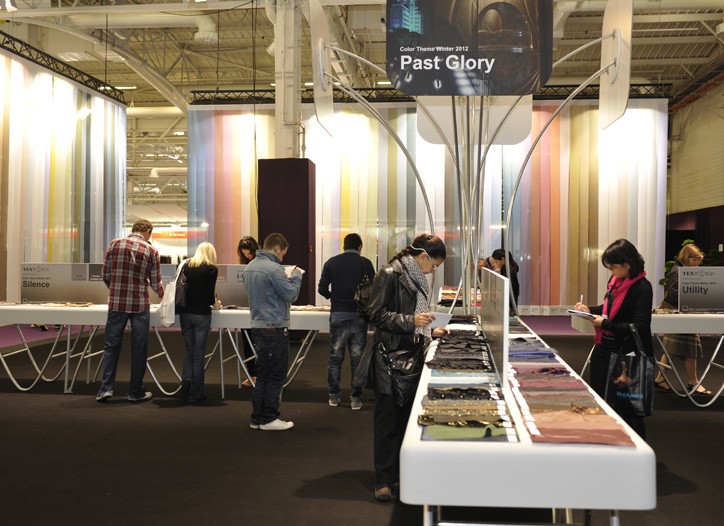 PARIS — The European textile industry is at a possible crisis point.

The bustling three-day event, which focused on the fall-winter 2011-12 season, ended Sept. 16 at the Parc d’Expositions, capping a week in which the Texworld fair took place from Sept. 13 to 16 at Le Bourget.

Between June and August, cotton prices increased an average of 45 percent on a like-for-like basis, according to a report by France’s Union of Textile Industries, affecting the entire textile chain. Silk prices have climbed 30 percent in the past 18 months, and wool prices are up 40 percent since mid-2009, PV exhibitors said.

Lucien Deveaux, president of UTI, who also is president of textile giant Deveaux SA, said the industry was at risk of being “strangled from the inside.”

Key issues include China’s enormous financial capacity for buying raw materials, export restrictions imposed by key cotton producing countries and an imbalance in supply and demand because of a contraction in global cotton supplies and an increase in consumption as economic conditions improved.

China in 2009 consumed about 40 percent of the world’s cotton production, according to the UTI report.

“The big danger is that countries like Pakistan want to impose taxes in order to keep raw materials for themselves and we’re at risk of falling to a monopoly similar to that of the OPEC for the petrol industry, with all of the disorganization that it imposed on the world’s markets,” Deveaux said. “[Such factors] could potentially [destroy] the textiles industry in Europe…which would not be able to sustain itself within that system. We are trying to motivate everybody not to give in.”

Despite lacking a clear road on future economic conditions, mills said they were in recovery. Some firms reported strong business, such as tweed specialist Malhia Kent, which has doubled sales in the past year. The house presented a Nordic-inspired collection.

Although their budgets were flat, buyers at PV liked what they saw but reported price increases of as much as 20 percent.

“It’s a major issue,” Michelle Don, product developer at Levi’s XX, said of pricing. “With everything that’s going on around the world economically, you don’t want to have to push it on to the final consumer. The question is: Do you absorb it or pass it on?”

Anne Marie Maxsween, a fabric buyer for Nicole Farhi, said, “Prices have gone up quite dramatically, which means we perhaps can’t get as much cashmere as usual.”

Some mills incorporated more affordable price ranges in their offerings.

Giovanni Turchet, president of Gentili, said, “They want to drink Champagne but pay the price of a Sprite. We’re forced to reinvent the quality, offer alternatives with the same image and flavor [as luxury fabrics] but using a different composition.”

Exhibitors at Texworld said customers were seeking out more blends in order to keep down their costs.

Iwao Kato, director of Japanese wool manufacturer Joint Bishu Brand, said its prices were stable for now, but their future evolution would depend largely on currency fluctuations.

“The yen is very strong, too strong,” Kato said. “That is a negative for the export market, so we have to cover the currency problem also. We hope the yen weakens.”

Helen Liu, vice general manager and head of the foreign trade department at Beijing Smart Garments Co., which produces suits for brands such as Theory in the U.S. and Burberry in Japan, said capacity was down after the company lost 15 percent of its workforce because of the shrinking supply of cheap labor in the Beijing area.

“This gives us the opportunity to choose good customers,” said Liu, noting that Beijing Smart Garments has raised prices 15 to 20 percent this year to reflect higher input prices, resulting in the loss of some customers.

Manuel Ribeiro, product designer at Portuguese denim manufacturer Troficolor, said the company was trying to keep its prices stable overall — despite a 10 percent increase in production costs — in order to reinforce its positioning as a provider of high-quality denim at midrange prices.

He cited strong demand for lightweight denim, noting that some clothing manufacturers were producing pants from 7.5-oz. denim, which is normally used for shirting, in response to global warming.

“Until a short time ago, there were specific seasons of the year,” Ribeiro said. “Right now, they no longer exist. There are more midseasons. People are wearing lightweight, comfortable clothing and then layering a warmer piece on top, so there is a greater acceptance of lightweight fabrics.”

Russian linen specialist Group Rulinen relies on locally grown yarn to supply its mills near Saint Petersburg and has therefore remained immune to market swings, said development director Maria Reshetneva. The company, which is seeking to grow its business in Europe and the U.S., confirmed the rise in demand for lighter textiles, saying linen was no longer seen solely as a summer fabric.

“You can use these fabrics in autumn-winter also because you can add waterproof protection with Teflon, for example,” Reshetneva said. “European customers are looking for natural fabrics, so linen will be used year-round.”

Hairy textures, bonded fabrics and innovative finishes were among key trends at PV.

Bianca Luzi, a designer at Raf Simons, lauded the digital printing techniques at Viscotex and technical fabrics by Sweden’s FOV Fabrics, a specialist in textiles for the medical industry.

After “the darkest year” of the last decade, Moritz Mantero, president of Como, Italy-based silk manufacturer Mantero, cited a double-digit increase in sales. Mantero introduced a full men’s and women’s scarf line at the event, wholesaling from 12 euros, or about $16, at current exchange rates.

Nagy Bensid, general manager, Europe, for Australian Wool Innovation, said the wool industry’s biggest challenge is the decline in production worldwide. Among upcoming projects, AWI on Oct. 11 will launch “Wool Week” in the U.K., as part of its Campaign for Wool initiative aimed at educating consumers about the value and natural benefits of wool. Retailers across U.K. high streets are expected to participate. A grass lawn, complete with grazing sheep, will be put down along London’s Savile Row.

Among other launches, Liberty Art Fabrics introduced its Artists Within Music range inspired and created by graphic and fine artists and photographers working in the music industry. Participants include Florence Welch of Florence and The Machine, and graphic designer Storm Thorgerson, whose famous album covers include Pink Floyd’s “Dark Side of the Moon.”

Marini & Cecconi introduced a full collection of H2 Wool casual-luxury oriented wool blends. Escorial, a New Zealand-based producer of the namesake luxury fiber sheared from the rare Escorial sheep, showcased fabrics by British manufacturers including Holland & Sherry and Reid & Taylor. The fiber is said to have a micron thickness finer than cashmere.