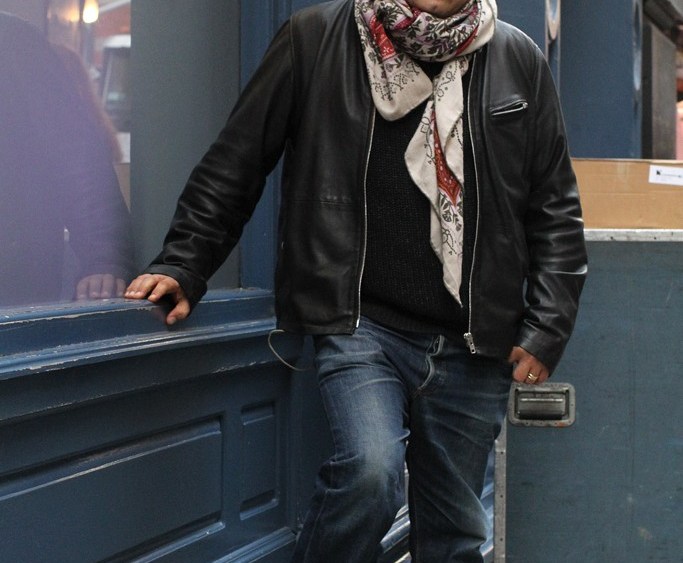 NEW YORK — A.P.C. turned its Mercer Street store into a nightclub Thursday night to celebrate the company’s 25th anniversary, capping off a nine-month celebration that began in Tokyo and wound its way to Paris and then New York.

Known for its minimalist designs, A.P.C. keeps a low profile, and that’s the way Touitou likes it. Unlike brands that often aspire to get bigger and bigger, often sacrificing quality, Touitou is adamant about controlled growth. He is worried about his home country and now looks to generate more business in the U.S.

“I’m very concerned with France. It’s a huge boat that will hit a huge iceberg. It’s going to collapse like Spain. Even Italy is going to do better,” said Touitou, on a visit to New York. He said French people won’t admit to it. “France will shrink a lot. The state is going to break very soon. I’m very happy America is welcoming and is big and is liking us.”

In addition to the 5,000-square-foot Mercer Street space, A.P.C. has units on West Fourth Street and an A.P.C. Surplus store on Perry Street in New York. The company plans to open a 1,500-square-foot store on Bond Street in March. Touitou is also looking at opening another unit in TriBeCa, as well as the Upper East Side and Brooklyn. A.P.C. has a store in West Hollywood and seeks to open another unit on Melrose Place and in Venice, Calif. It’s also interested in San Francisco.

Last March, Touitou got a financial investment from French investment firm Audacia for a temporary cash injection to fund its expansion. “It was a joke,” he said. “A guy called me because his niece worked for my company. The guy was young and nice, and he’ll stay in for three years.” Touitou said he doesn’t enjoy talking with bankers, so he was happy to get the money from an investor. The investment allowed him to acquire a good location on Rue Royale in Paris so he could open an A.P.C. store between Gucci and Chanel.

“This gave me comfort. I have a huge atelier and you need money to pay for all of it,” said the Tunisia-born executive, who moved to France when he was nine. A.P.C. employs 250 people in France and 50 people in the U.S. He already has stores in London and will be opening a second store in Berlin. He also operates stores in Shanghai, Beijing and five stores in Hong Kong.

In Japan, he sold his company to a firm called Look. “I was owning all of it, and I got tired of it. I tried to have a democratic conversation with them, and they’re not educated to those kinds of conversations,” he said. He said they would agree to buy the line and wouldn’t constructively criticize it, and then they couldn’t sell it properly. Now, A.P.C. designs the line, but Look will tweak it for the Japanese market. The company operates 19 stores in Japan.

Most of A.P.C.’s collection is manufactured in Europe, with fabrics from Italy and England. Fifty percent of A.P.C.’s business is geared toward women, and 50 percent toward men.

Touitou doesn’t believe in social media as a way to advertise. “I think it’s fake. I think it’s going to die soon. I’d rather have classical advertising. We built this brand with limited advertising and limited ambition,” he said. Each year, the company opens about five to seven stores, designed by the architect Laurent Deroo. The company was an early adopter of e-commerce, having launched its site in 1997.

“I’m satisfied with the way it [business] is,” he said. He said he likes restaurants where the chef is cooking and hotels that are family-owned. Once they get too big, they lose their soul. That can be applied to all kinds of businesses, he believes. “I’m not trying to add more zeros to my figures.” A.P.C. generates around $80 million in retail sales.

The company does several collaborations, such as one with Vanessa Seward, former artistic director of Azzaro, for a feminine, dressy line, and one with an A.P.C. codesigner, Louis Wong, for high-end leather jackets called Louis W. It also has a collaboration with Nike for shoes.

Touitou meets many people in the music business because he runs a recording studio out of his Paris design studio. A.P.C. has released more than 25 albums to date, including recordings from Lili Boniche and Bill Laswell to Jean-Baptiste Mondino and the Septeto Nacional from Cuba. A.P.C. also has print T-shirt collaborations with emerging bands, such as Veronica Falls, The Rapture, Paradis and Connan Mockasin.

Asked what he considers his biggest accomplishment of the last 25 years, Touitou said: “I’m proud that nothing I did I need to hide. I didn’t do a license for wallpaper in Japan. I have no licenses.” One category he’d like to pursue is sports performance clothing.

A father of three, Touitou said he’s satisfied with his life and the level of success he’s achieved.

“I have a 45-foot boat [in which] I can go all around the Mediterranean Sea,” he said. “People may call me a minor league player. I have an excellent car, a home in the country. That’s enough.”