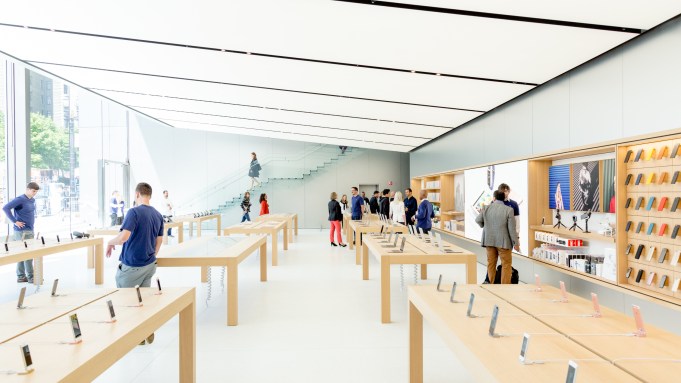 SAN FRANCISCO — Apple senior vice president of retail Angela Ahrendts on Thursday gave a first look at the company’s new flagship in Union Square here. The space was designed to be a community gathering place, although certainly Apple wouldn’t mind showing or selling an iPad or Apple Watch in the process.

Fittingly, this is also the 15th anniversary of Apple’s stores, and in a small presentation in front of press and photographers, Ahrendts shared that she really had to push to offer the preview.

“We don’t usually do this before the store opens,” she said, “so it’s like going in the kitchen before the meal is ready.” After asking for a bottle of water — the former Burberry chief executive officer still gets nervous, she said — she introduced a reimagined concept for what the future of Apple retail will be, while making note that the company’s largest “flagship” is apple.com.

The changes will start with this location, which is just 38 miles north of Apple’s Cupertino headquarters, then roll out to other Apple stores in the U.S. Ahrendts emphasized that the theme was designed to be evocative of a town square, but that it was really important that the stores didn’t lose signature elements, including the wooden tables that are designed to look like the tables that Apple chief design officer Jony Ive designed the products on.

The two-story space, filled with wood, steel and glass, is still reminiscent of current Apple stores, with a few updates. Most dramatically, the entire front and back walls of the store are built with massive 42-foot sliding doors that open up to the sidewalk outside, and there are live trees within the store.

“We have a deep commitment to the cities we work in and are aware of the importance that architecture plays in the community,” Ive said. “It all starts with the storefront — taking transparency to a whole new level — where the building blends the inside and the outside, breaking down barriers and making it more egalitarian and accessible.”

Ahrendts called the space “our largest product,” and said she loved the openness and transparency, saying that she was inspired by London’s Covent Garden. “Most importantly, this is not just a store,” she said. “We want people to say, ‘meet me at Apple.’”

The first new element to the retail concept is what Apple calls “The Avenue,” which is inspired by shop window displays. Apple’s interactive “windows” there feature rotating products and services, including third-party items found only at Apple. Ahrendts shared that the company has also created a new role it is calling “Creative Pros,” which nod to Apple’s culture of merging technology and liberal arts. These staffers, who are hired from backgrounds in arts like music and photography, will guide and demonstrate to Apple store visitors; the iPhone camera, she reminded the crowd, is the most used camera in the world.

The Genius Bar also got an upgrade; it’s now become the “Genius Grove. Live ficus trees are meant to inspire peace, an antidote to the frustration of broken gadgets. Other new features are “The Boardroom,” created with small businesses and entrepreneurs in mind, and “The Forum,” centered around a floor-to-ceiling video wall, where Apple will host “Today at Apple” programs.

Finally, “The Plaza” is the most literal interpretation of the town square approach. It is an outside seating space that will be open to the public at all times. It’s equipped with free Wi-Fi, a fountain, a green wall, artwork and the occasional local acoustic performance.