The wraps come off after nearly three years of construction.

NEW YORK — Apple today previewed its greatly expanded and highly anticipated reimagined flagship at 767 Fifth Avenue here, which had been under construction for almost three years. Nearly double the original’s 32,000 square feet, the vast store sits beneath an renowned luminous glass cube, which rises above a newly designed public plaza.

The flagship opens at 8 a.m. Friday in time to launch the iPhone 11 family of products and Apple Watch Series 5.

Visitors enter the store by descending a new stainless-steel spiral staircase with 43 cantilevered stair treads that support a floating glass cylinder. There’s also a circular elevator to the grand hall. 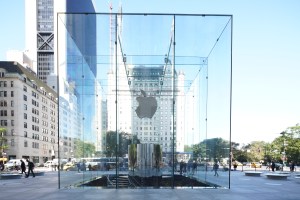 Tim Cook, Apple’s chief executive officer, said the Fifth Avenue flagship “is unique among Apple stores, and it’s returning even more welcoming, and even more beautiful than ever.”

When the Fifth Avenue flagship opened in 2006, Apple cofounder Steve Jobs welcomed the first customers to enter the cube. More than 57 million consumers have visited the store since the opening, surpassing the annual foot traffic to the Statue of Liberty and Empire State Building.

The store, which will be open 24 hours a day, 365 days a year, has a higher ceiling and more natural light. The back-lit, cloud-like ceiling made from curved fabric combines artificial and natural light to match the real-time tones of sunlight throughout the day. “The whole idea here is, how could we make the space feel happy and fresh,” said Stefan Behling, head of studio and senior executive partner at Foster + Partners, Apple’s architecture firm of record. “It gives you an uplifting experience.”

Foster + Partners has been working with Apple for about a decade, including the tech giant’s 2017 Apple Park headquarters in Cupertino, Calif., which was shaped by Jobs’ vision. “We’ve worked with Steve and Jony exceptionally closely,” Behling said, referring to Jony Ive, Apple’s former chief design officer, who left last June. “We start to think in similar ways and finish each other’s sentences.”

Behling said the hard edges and sharp corners of the old plaza were softened to “make it more of a people’s place. Apple is giving New York a gift. This is going to be a fun plaza. You can sit on a bench amid trees and fountains.”

The redesigned plaza is lined with 28 honey locust trees and seating bordered by linear water features. On either side of the cube are 18 Skylenses with stainless steel bases and mirror-glass tops that provide windows into the store, while 62 skylights flush with the plaza floor stream light into the space below.

“One of the innovations in this store is that we introduced longer tables,” Behling said of the European oak furniture. Eight large fig trees and a wall of plants are a foil to all of the technology.

Apple’s flagship will be staffed with 900 employees who speak over 30 languages. The best news for consumers, however, may be that the space dedicated to the Genius bar has doubled, allowing the team to dramatically increase its service capacity.