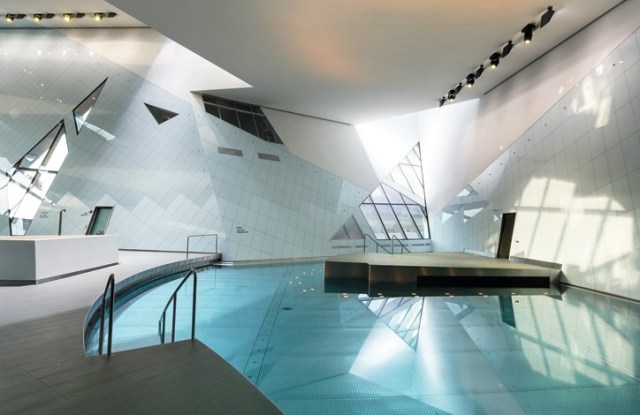 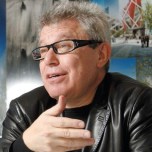 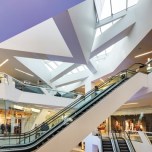 When architect Daniel Libeskind won the assignment to design the Westside Shopping and Leisure Centre in Bern, Switzerland, his objective was made quite clear.

“Do something beyond the box on the highway made of cheap tin,” Libeskind said, describing the challenge presented by the owner Migros, the large Swiss company operating supermarkets, department stores and other retail formats.

“Shopping, leisure, retail, hotels — Westside is a whole complex,” he said. “Why shouldn’t that have the same degree of architectural attention as a museum or a civic building? Since people use it everyday, it’s probably even more important. This was not just a one-off.”

During an interview at his offices in Lower Manhattan, Libeskind, 62, said he took inspiration from a somewhat unusual source in designing Westside. His point of reference was “The Big Store” a Marx Brothers movie that was made in 1941.

“They actually move into a store, like a Macy’s, after the store closes,” he said. “They start using the beds, the kitchen. I thought this is the right idea. That people should live there. It shouldn’t be just an abstract experience. People should own it — emotionally, intellectually. They should feel this is their home.”

With America’s malls losing shopper traffic and typically perceived as sterile, new perspectives are needed, even from someone who takes inspiration from offbeat sources and was long an outsider to the industry.

Libeskind has an international reputation for creating celebrated buildings, including the Jewish Museums in Berlin and Copenhagen, the Denver Art Museum, the Royal Ontario Museum, the Ascent residential high-rise in Covington, Ky., and skyscrapers and other commercial and residential projects around the world. In 2003, he won the competition for the master plan to rebuild the World Trade Center site and is credited with naming a key structure, the Freedom Tower.

The 1.5 million-square-foot, $400 million Westside, which opened last month, was his first mall project. Libeskind’s second is the 500,000-square-foot retail, entertainment and dining complex known as The Crystals, inside the huge $9 billion MGM Mirage City Center in Las Vegas. Libeskind said the project, despite Las Vegas’ economic woes, is proceeding on schedule and is to open in December 2009. He also is designing the Riverstone shopping complex in Inchon, South Korea.

In tackling this new territory, there’s some irony. “I don’t like mall shopping and I have been to a lot,” Libeskind said. “Even the new malls — they play on sort of theme park ideas. They are really not a sophisticated cultural experience. There’s a dumbing down effect. Totally uninspiring. It’s kind of like being imprisoned in a boring environment. You just want to get out quickly.”

Westside has 70 stores, 20 restaurants and bars, a hotel, a convention center, a multiplex cinema, senior citizen residences and vast amenities, including a large spa with a water park and a wellness and fitness center occupying about 20 percent of the complex. A highway runs underneath, and there are tram and railroad stops. There’s an avant-garde exterior created in layers of wood, like a weave, and has big cuts for sunlight to stream in. The idea is to evoke the nearby countryside.

Although Americans might refer to Westside as a mixed-use facility, Libeskind described it as it “a new organic whole.…It’s not a solitary, one-dimensional mass. My idea was to transform the idea of the formula of the shopping center. I didn’t tamper with the formula for making money. This is a huge potential in really focusing on public spaces. Where people walk, where people move, where they have dinner.”

The architect wanted to create a composition that was more of “a place to be and stay — not just where you go shopping and go back home….It’s really an urban complement to the richness of Bern,” the capital of Switzerland. “It’s in the countryside. I made it so it would be synergistic to the traditions of Bern — the arcades, the famous clock tower. But in new spaces, with a new scale of activity.…It’s to make you think, my god, I have arrived at a museum or a great cultural institution. That’s the point. Just as much as my clients in museums want them to be commercially successful, so do commercial clients want to bring a cultural component. It’s not just about spending money.”

Libeskind said that, in its first month, Westside drew almost one million people.

“Think about that: in the middle of the countryside.…When it opened, it was like Rockefeller Center at Christmas,” he said. “And where do these people come from? From all over. From these peripheral neighborhoods on the highways in kind of nowhereland. I thought, this is a chance to create a real interesting place to spend a few days with your family, and I’m thrilled. It’s really very unusual. Even the shop fronts are not all rectangular. They are more like vitrines in a grand museum. What is a museum? Museum is about desire and imagination. And what is shopping? It’s about desire and imagination. They are very linked.”

But does the intricate architecture of Westside overshadow the stores and make the center hard to navigate?

“But I think architecture is a huge component of making people want to come somewhere,” he explained. “They don’t want a corridor with some shops on both sides and some marble glistening. They want the same experience walking the streets of Bern. It’s intricate. It’s complex. I wanted to make Westside very intimate. I didn’t want to waste space. I didn’t want to make grand gestures that are sort of useless. So I scaled the place to intimacy,” though he described the swimming facilities and the spa as more like churches, in terms of their height and natural light.

“It forms a unified experience, a harmony,” Libeskind said. “It echoes the arcades of Bern. It echoes the medieval architecture, in 21st-century techniques. And that’s why I think people like it. It’s not just a big, anonymous space filled in with shops. It has historical reference.”

With the Las Vegas project, the biggest in the U.S., Libeskind said the intent is to create “a great urban space that is not nostalgic, not sentimentally referring you to Paris or Venice or some other mock reference. But to tell you we have a new 21st-century city. It’s Nevada. It’s Las Vegas. It’s a sustainable building. Not just nice architecture. We’re using and saving energy in cutting-edge ways. We don’t want to be in these fake environments anymore, like in those casinos with painted blue skies and artificial sun. I said, ‘No, this should be real.’ I always thought, what an irony: You’ve got beautiful blue sky above — why would you paint blue sky?

“The reason I undertook MGM Mirage is that I wanted to do something which has never been done — raise the whole idea of retail public space to a level that would compete with museums and with grand civic buildings,” he said. “It’s a radical change.”

Libeskind said he’s been asked repeatedly why an architect known for creating museums would design malls, as if it’s beneath him. “I’m glad you didn’t ask me that. The answer should be obvious. Architecture is not just about museums.”

His perspective is that architecture should embrace the spectrum of life. Libeskind’s projects are detailed in a book, with The New Yorker’s architecture critic Paul Goldberger, released last week, called “Counterpoint: Daniel Libeskind” (The Monacelli Press). In it, Libeskind even cites “The Big Store” for affirming what he tries to convey in his projects: “That life is the unexpected crossroads of possibilities.”