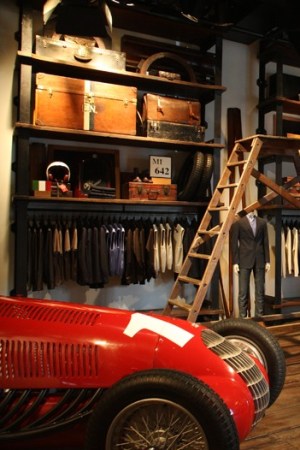 NEW YORK — The Argentine jet-set lifestyle is on display at Etiqueta Negra’s new flagship in SoHo.

Fast cars and polo are pillars of the Etiqueta Negra concept, conceived by Federico Alvarez Castillo, who is married to Paula Cahen d’Anvers, designer of the women’s collection. The two-level, 6,000-square-foot unit at 273 Lafayette Street, Etiqueta Negra’s first store in the U.S., is projected to do $3 million in sales in its first year, according to a spokesman.

Alvarez Castillo, who has one of the largest collections of classic cars in the world, rotates autos from the collection between each of his 11 stores in Argentina. A red Thirties Alfa Romeo greets shoppers entering the SoHo unit. Other props include an old Texaco oilcan, rowing oars and a car dashboard. Walls are painted black and there’s a tin coffered ceiling.

An owner of Ellerstina, Argentina’s top-ranked polo club, Alvarez Castillo devotes a section of each store to authentic apparel for playing polo or watching a match. Aside from polo-specific attire, Etiqueta Negra, which means black label or black tie, offers casual clothing with little in the way of decoration and minimal logos.

The company touts the quality of its products: boots made by Casa Fagliano, which serves Prince Charles and the British Royal Family, Argentine leather for jackets and Peruvian pima cotton for polo shirts. Much of the apparel is manufactured in Italy.

The company plans to open another Manhattan store before year’s end and is eyeing Fifth Avenue and Madison Avenue. A unit at the Aventura Mall in Miami is scheduled to bow in 2010.

“We made all these plans before the recession,” the spokesman said. “In Argentina, we’re always in recession. We’re doing well there despite the crisis. We’re working on wholesaling in the U.S.”

Etiqueta Negra believes in selling timeless pieces “that will be in your closet forever,” the spokesman said. A classically tailored white cotton coat is $720; black pants, $220, and a women’s dress shirt with epaulets, $220. The large selection of leather items includes a black leather jacket with stitching detail on the shoulders, $1,200; a leather blazer, $1,200; a black leather zipper jacket, $700, and a buttery leather jacket with pockets in black, beige or dark brown, $1,400. There are basics such as cotton T-shirts and tanks, two jeans styles and black or white mock-turtleneck sweaters. The tightly edited selection of handbags and shoes includes lizard boots, $800; clutches, $600, and lizard belts with horn buckles, $340 to $380.