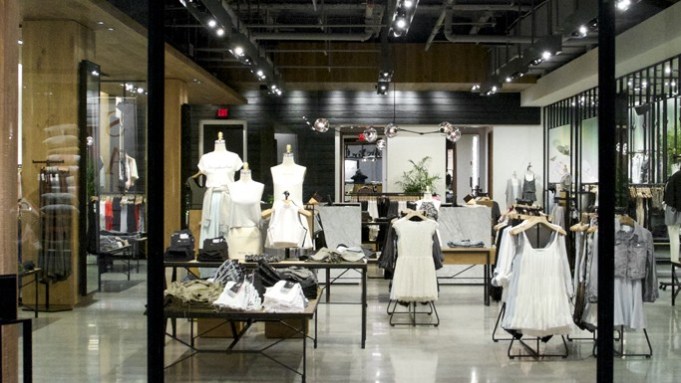 “There’s definitely room for more stores in the U.S. and more in New York,” said Oliver Walsh, chief marketing officer. “We have 22 stores in greater Toronto alone. We have 49 stores in Canada and we haven’t reached a ceiling.”

Aritzia in 2011 unveiled its first New York store, a 10,680-square-foot unit on West Broadway in SoHo. That location will be expanded this year to 18,320 square feet. In addition, a new unit will open in the Flatiron District. It will be Aritzia’s third store in Manhattan after a 13,500-square-foot flagship on Fifth Avenue between 48th and 49th Streets that opened in 2012.

Also on tap this year: the largest Aritzia store in North America will open on Saint Catherine Street in Quebec and a flagship will be unveiled in Halifax. Locations are planned for Oshawa, Vaughan Mills and Saint-Bruno, Canada.

“I see huge growth potential for Aritzia in the U.S. market and internationally,” said Brian Hill, founder and chief executive officer of Aritzia. “We’re currently focused on retail expansion within North America. Today we have 49 locations in Canada and 15 in the U.S., and I would expect over the next five years for our store ratio to approach fifty-fifty even as we continue to round out the Canadian market.”

Unlike Canadian competitor Joe Fresh, whose bright orange logo has become ubiquitous through persistent advertising, Aritzia has taken a quieter approach to its U.S. business. Even Walsh admitted that Aritzia has “a very unmarketing approach.” But that’s changing. “We’re starting to be proactive,” he said.

In the last six months, Aritzia introduced a raft of initiatives, including the launch of two denim lines and two handbag collections, with prices ranging from $250 to $600.

Aritzia mixes together its private brands with designer collections such as Rag & Bone, Mackage, Marc by Marc Jacobs, Alexander Wang and J Brand. “We want to offer the best of the best of boutiques,” Walsh said.

The vertically integrated multilabel retailer has created 14 proprietary brands with different style profiles and names such as Wilfred and Babaton. The latest, Sunday Best, combines vintage-inspired classics with modern trends. “We won’t stop in terms of expanding categories,” Walsh said. “In the pipeline, accessories will grow and expand.”

The growing appeal of Aritzia’s private brands convinced the company to open in December a freestanding store for Wilfred, whose lace-trimmed silk blouses, drapey dresses, drawstring pants and wool and cashmere blend coats are billed as “effortless elegance.” The 3,000-square-foot Wilfred boutique at Robson Street in Vancouver is adjacent to an existing Aritzia location and can be accessed through a street entrance and through Aritzia. The sleek Wilfred store features white marble, concrete floors and raw steel juxtaposed with antique brass, vintage furniture and potted plants.

There are six freestanding stores for TNA, a casual private brand consisting of buffalo plaid shirts, camouflage pants, hoodies and parkas. The company said the single brand store concept will be continued as opportunities present themselves and that the stores don’t always have to be next to existing Aritzia units.

While Aritzia was late to launch e-commerce, introducing its U.S. Web site in 2012, Walsh said that global e-commerce is set to launch this quarter. “Clearly, there’s a big opportunity in Asia and elsewhere,” he said.

As Aritzia prepares to mark its 30th anniversary in the spring, awareness of the about $500 million retailer is growing. “We are finding that our product and store concept is really resonating with the U.S. customer, and our increased brand awareness is being felt through both our retail and e-commerce channels,” Hill said. “We already have significant numbers of loyal and engaged customers in the U.K., Australia and, of course, Asia, which has many close ties to our hometown of Vancouver. We want to ensure that they get the same exceptional quality of experience as our North American customers. Retail expansion outside of North America is something that we will continue to assess and will no doubt enter when the time is right.”