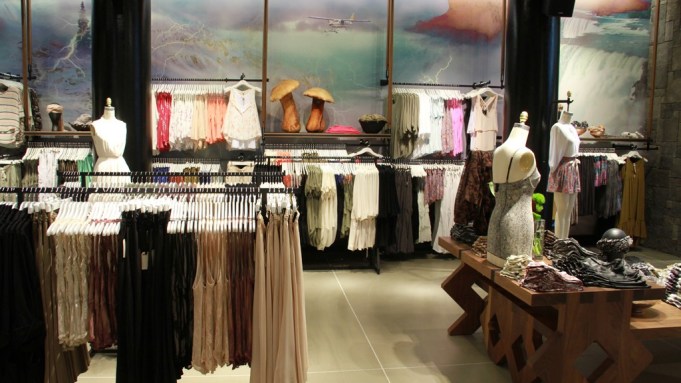 NEW YORK — Aritzia, the Vancouver-based retailer, in November will open a 13,000-square-foot flagship at 600 Fifth Avenue in a building that is part of Rockefeller Center. The flagship will be Aritzia’s biggest store in the world, a distinction held by the 10,000-square-foot SoHo store, which opened in June 2011.

“Fifth Avenue is truly one of the global destinations,” said Brian Hill, Aritzia’s chief executive officer. “There’s a high quotient of tourists in both places, but Fifth Avenue has a little more of a serious shopper.”

Aritzia will take over space previously occupied by Esprit, which closed in February as part of the beleaguered Esprit Holdings’ decision to shutter all of its North American stores.

Robin Abrams, a retail real estate broker at the Lansco Corp., said Aritzia’s new location is significant because “it will have an impact with regard to the type of tenancy that locates on Fifth Avenue and it will send a message that the west side of Fifth Avenue is trending more toward fast fashion than luxury.” Abrams said the invisible line separating the more upscale Fifth Avenue addresses from the more populist stores was historically between 49th and 50th Streets.

Aritzia designs several exclusive labels, including Wilfred, made with luxurious fabrics; Wilfred Free, a casual lifestyle brand; Le Fou by Wilfred, the most directional line; the modern and classic T. Babaton, and the edgy A Moveable Feast. In addition, the retailer carries designers such as J Brand, Joie, Cynthia Vincent, Athe Vanessa Bruno and Swedish Hasbeens.

“SoHo has exceeded the top end of our estimations by 50 percent,” said Hill. “It all seems to be working. We’ve had a very directional customer so our directional pieces within the brands have had no resistance at all in SoHo. The only thing that surprised us was the volume and lack of resistance to high points.”

Aritzia’s sales volume in the U.S. is more than $1,500 a square foot. “Our business continues to be exceptionally good in Canada and the U.S.,” Hill said.

The Fifth Avenue flagship will have an escalator to convey shoppers from the main floor to the lower level. Aritzia’s SoHo store is designed to evoke the metaphysical world and natural phenomena such as butterflies, erupting volcanos, Niagara Falls, storms and woodland creatures.

As to whether Aritzia plans to open more stores here, Hill said, “Manhattan’s a big town. We have 14 stores in places like Toronto. We think there’s lots of room for growth. When you look at other big retailers, such as H&M and Zara, they have lots of stores.” Hill is looking at real estate on the Upper East Side, Upper West Side, Meatpacking District, Flatiron District and 34th Street. Aritzia opened a store at the Somerset Collection in Tory, Mich., recently, and has started construction on a unit at University Village, an open-air center just north of downtown Seattle.

“We’re not looking much in the South,” Hill said, adding that Aritzia will open three to four stores in the U.S. this year. “We’re going to have to solve the climate issues: Florida, Texas and Southern California. We will have to tackle that at some point. Once we do, it will open up a lot of opportunities. We see an opportunity for 50 stores in the North and 50 in the South.”