The 15-year-old actress will appear in ads, curate looks online, tweet about the brand and turn up at events the retailer sponsors. 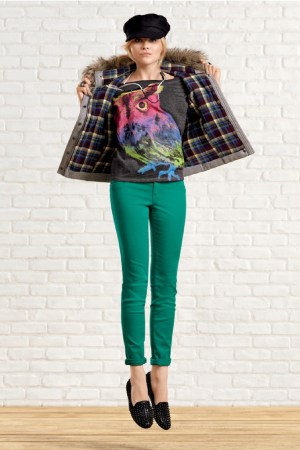 This story first appeared in the July 9, 2012 issue of WWD. Subscribe Today.

To get the word out, it’s hired Chloë Grace Moretz as its first brand ambassador. The 15-year-old Moretz will appear in ads, curate looks online, tweet about the brand and turn up at events such as the Jingle Ball, which Aéropostale sponsors.

“Over the last few years, the uniform for girls has changed,” said Tom Johnson, chief executive officer. “The number of different brands girls shop is broader than ever. In some cases, they’ve migrated to more fashion-oriented brands. Knowing this, we knew we had to continue to evolve fashion.”

Aéropostale’s core customer is 14 to 17 years old, but the brand also caters to younger boys and girls.

“We broadened our assortment,” Johnson said. “Girls want newness in silhouettes and fabrications. We’re adding details such as lace and crochet and we’re moderating the logo.”

Moretz, an actress whose résumé includes “(500) Days of Summer,” “Kickass,” “Hugo” and “Dark Shadows,” will star in the title role of MGM’s remake of “Carrie.”

“We know she will connect with our customer,” said Scott Birnbaum, senior vice president of marketing and e-commerce, insisting that Moretz will be more than just a pretty face. “She’s extremely interested in fashion. She sits in the front row at all high-end fashion shows. She’ll judge contests for us and be the spokesperson for our Teens for Jeans campaign.”

Moretz’s first ad campaign will be for back-to-school. “She’s very focused for a 15-year-old,” said Rocco Laspata, partner in Laspata DeCaro, the agency that created the ads. “She’s very grounded, but still a kid.”