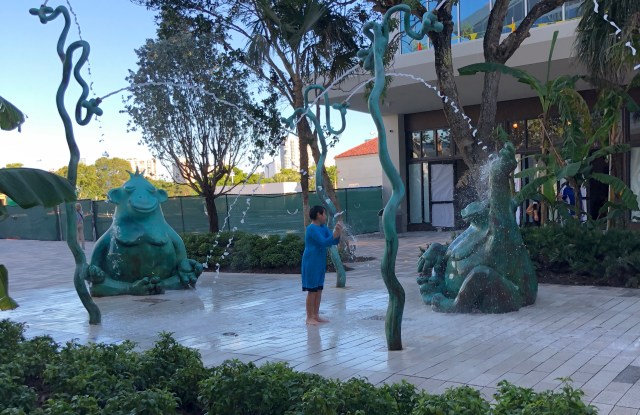 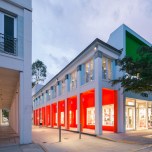 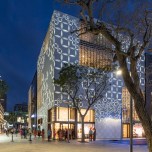 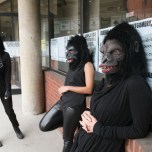 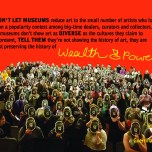 Every year, when Art Basel Miami comes to town, the whole city participates.

For four days — Dec. 7 to 10, this year — everyone becomes a curator, gallerist, art expert and critic. That holds true for Miami’s malls and shopping districts, which take advantage of the world-renowned art fair by hosting receptions, mounting exhibitions and organizing lectures. After all, Art Basel attracts 70,000 visitors to the Miami area, and when they’re not looking at art, the tourists need a place to sleep, eat and, yes, shop.

Art is second nature for many of Miami’s shopping centers and retail districts. Aventura Mall, which is building a 320,000-square-foot expansion wing where Zara and Topshop recently opened, has a collection of museum-quality contemporary art by Louise Bourgeois, Ugo Rondinone, Daniel Arsham, Jorge Pardo and Jaume Plensa, that rotates through the space.

Site-specific works include “Aventura Slide Tower” by Carsten Holler, a 93-foot tubular sculpture that can be appreciated from a comfortable distance, or experienced by sliding down the work, an experience Holler called “an emotional state…somewhere between delight and madness.”

Another installation made for the new wing is the Haas Brothers’ “Gorillas in the Mist,” which consists of three large-scale bronze monkeys and four huge bronze trees. The sculpture, which is located outdoors, circulates water.

“Aventura is having a good year. We had a good Black Friday,” said Jackie Soffer, chief executive officer and co-chairman of Turnberry, whose properties include Aventura. “We still have a tenant for every space. It’s almost survival of the fittest.”

“We’re one of the few shopping centers that have luxury retailers without having the luxury anchors,” Soffer said. “We have a 19,000-square-foot Louis Vuitton flagship that was designed by Peter Marino, and a Gucci flagship. We also have Givenchy, Tiffany, Cartier, Pomellato and Bally. Burberry doubled the size of its store.”

With all the upscale tenants, Aventura replaced its food court with a food hall. Restaurants include Serafina, Trattoria Rosalia, Cvi.che 105, the Grill on the Alley and Dr. Smood.

While the ranks of wealthy Russian and Brazilian tourists who frequented Miami until a few years ago have shrunk, Soffer said shoppers from other parts of the world have taken their place.

“It’s cyclical,” she said. “Argentina has a healthier economy and people starting to come from there. The Russian, Venezuelan and Brazilian customers were stronger before. We’re reattracting sophisticated New Yorkers and Angelenos. Those kinds of people have replaced some of the other tourists.

“We have 28 million people a year coming to our property,” Soffer added. “It’s a big attraction in South Florida. A lot of tourists have condos here. Miami has changed a lot in the past 10 to 15 years, from a cultural and image perspective. We didn’t have a lot of great restaurants and cultural experiences.”

“A lot of malls in primary markets are growing in proportion to how the economy is growing in their region,” Graziano said. “We have both. The economy in the region is strong and we have the external demand from tourists.”

“Miami’s having a really good year so far,” said Craig Robins, chief executive officer and president of Dacra, a Miami-based real estate development firm that owns 70 percent of the neighborhood’s properties with partner L Real Estate. “Since June, sales and traffic have been up 45 percent. Occupancies are also up. We have real expectations for a good year.”

The Design District has a natural affinity for art, and therefore, Art Basel. The district opened its second museum, the Institute of Contemporary Art, which joins the De la Cruz Collection Contemporary Art Space.

“Because of Art Basel, the entire art world will be in Miami,” Robins said. “Every night, there will be parties and events in the Design District.” A free concert on Dec. 5 in the Palm Court will feature Mary Anne Huntsman, Jesse Jo Stark, Ana Villafañe and the Miami Symphony Orchestra, conducted by Eduardo Marturet.

A series of exhibitions and pop-ups relating to Art Basel will be unveiled, including “Abstract/No Abstract,” presented by Larry Gagosian and Jeffrey Deitch at the Moore building, and Ibrahim Mahama’s off-site project, courtesy of White Cube.

The Design District is in the throes of construction — again — as it’s been on and off since it was redeveloped. “The second half of the design district will start to open soon,” Robins said. “Half of it has been under development.”

Two blocks of 41st Street will open, along with Paradise Plaza, between 41 and 42nd Streets, bounded by Northeast First Avenue and Northeast Second Avenue. Rag & Bone and Joseph recently bowed, while Dolce & Gabbana, Rick Owens, Prada, Céline and Balenciaga will be unveiled over the next few months. “A big, two-level Gucci store is opening, which will be their most spectacular store in the U.S.,” said Robins.

American Dream Miami, a retail and entertainment behemoth from Triple Five, is in “the planning and assemblage phase,” according to Graziano. “They announced they would be moving forward. There was some land acquisition that needed to be completed. These are massive projects with a couple billion dollars of investment.” Triple Five is still working on its American Dream in the New Jersey Meadowlands, a project that’s 14 years in the making, and counting.

“The whole retail format of regional malls is changing,” Graziano said. “There’s been some [acknowledgement] that larger anchors need to get smaller. The anchor space is a real problem. Entertainment is the future.”

With retail in flux, mature markets such as South Miami and Miami Beach have been trying to “reposition themselves and reset rents downward to accommodate more localized tenants,” Graciano said. “The shopping patterns of the region are being affected by online sales. The aggregation of  [department stores] has homogenized the shopping experience. People are shopping in smaller areas in their neighborhoods.”

Coral Gables is counting on that as it widens sidewalks and makes other improvements to re-brand and reposition its downtown shopping district and Miracle Mile. “They took a much different approach to try to retain local businesses,” Graziano said. “They’re developing a pedestrian mall.”

Brickell City Centre, which opened in November 2016, “has delivered more critical mass and luxury retail to the area and is lifting rents and setting a new high water mark for downtown retail rents,” the report said.

Brickell’s Art Basel program, Fair., will be an all-women, non-commercial art event that addresses gender equality and illustrates how activism and contemporary creative processes can inspire and empower women. Art at Fair., won’t be for sale.

“The whole center will be completely activated for Art Basel,” Overholt said, adding that Fair., elements will be located throughout the center. A 5,000-square-foot raw storefront, Fair Market, will feature works by the Guerilla Girls, a group of feminist artists who hide their identities, wear gorilla masks in public and use humor and outrageous visuals to expose gender and ethnic bias, and corruption in politics, art, film and pop culture.

Fair Play, devoted to video, will feature The Femmes’ Video Art Festival projected on CMX Cinemas’ LED screen. Fair Trade’s public works, performances and happenings, will include Yoko Ono’s “Wish Tree,” which asks viewers to leave their wishes behind, with their act becoming a part of the creation of the work.

“We’re very happy with our traffic and sales,” Overholt said. “It’s much more alive this year. We’ve been doing a lot of things to help encourage visits, like offering two hours of free parking. We have 100,000 office workers who take the people movers here for lunch. It gives us a really strong daytime traffic flow. This area has the highest density of workers, residential and hotel guests. It’s different than a typical suburban mall.”