The U.K.-based web site offers big brands and niche brands and is seeking to more market share in the U.S.

Whether they’re getting pickier or pop culture influenced, there’s no doubt kids in the U.S. are taking a greater interest in fashion and have more say in what their parents buy for them.

With that in mind, the U.K.-based Childrensalon.com is tailoring its web site to the American market where it’s striving to capture a bigger share.

“The U.S. market has been growing over the last 10 years through word of mouth, but we want to make the brand more visible to the market,” said Mel Ng, commercial director of Childrensalon.

The web site, which takes an elevated approach to children’s wear by merchandising upscale brands and designer lines, has been bolstering its digital marketing and developing content tailored to the U.S. by communicating products believed most suitable to the tastes of U.S. shoppers. On Childrensalon.com, Gufo, Monnalisa, Kenzo, Chloé, Gucci, D&G, Versace, Moncler and Burberry are top-selling brands in the U.S.

Last year, Childrensalon generated $13 million in sales in the U.S., making it the site’s second largest market next to the U.K. The Mideast is also a big market but not growing as quickly as the U.S. Total volume for Childrensalon, which ships to 160 countries, was approximately $130 million last year.

The company in December 2018 introduced five “salonnieres” in the U.S. They’re kids, but not typical kids. They’re either celebrities or influencers. They blog about style, new Childrensalon products, their lives and their favorite things to do in different cities. Sometimes they act as “ambassadors” hosting Childrensalon events.

Salonniere Haileigh Vasquez, for example, has 130,000 followers online. She discusses what she loves about New York City, which is her hometown, and her five favorite activities — visiting the museums, Coney Island, shopping, the Central Park Zoo and the Easter Parade. Another salonniere is child actor Jeremy Maguire who plays Joe Pritchett in ABC’s sitcom “Modern Family” and does Q&As on his Instagram account. The salonniere program will soon extend into the Middle East and U.K. and eventually other regions. 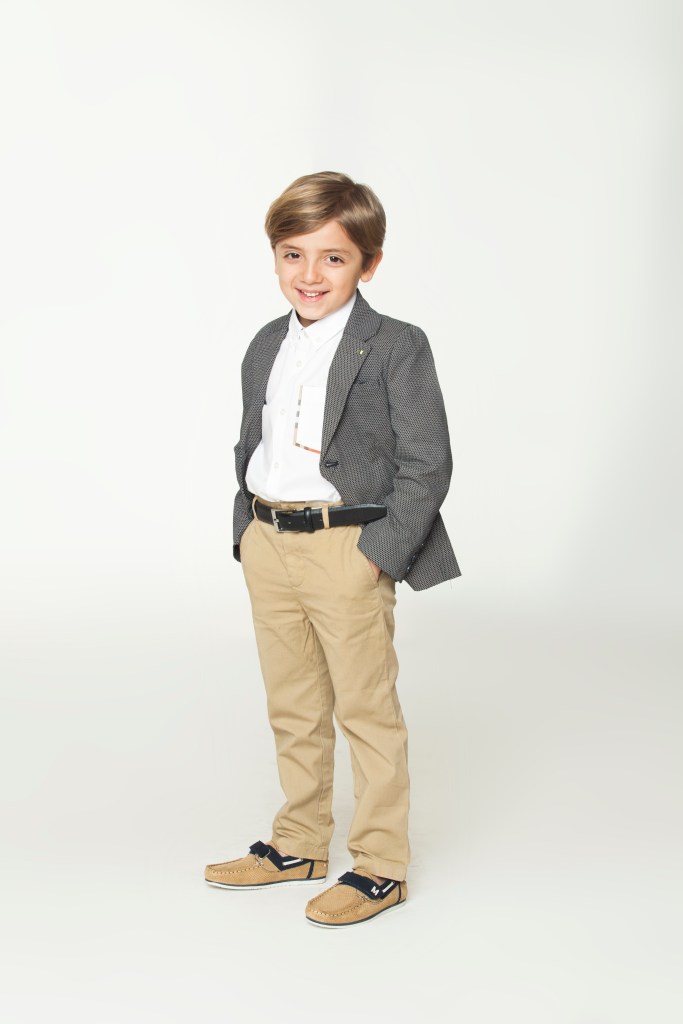 Jeremy Maguire in a Mayoral blazer and chinos and Burberry shirt.

“Salonnieries each have their own style and own favorite items that work for them,” Ng said. “It could be leisurewear or fancy dresses. It’s not so much about showcasing brands. It’s about the actual individual products.”

“The focal point of our strategy is to build and grow our relationship with the U.S. public by raising brand awareness and engaging with local communities through our influencers’ lifestyles for occasions which we believe matter to them,” said Arianna Vaccas, director of communications for Childrensalon.

With the web site, “We are currently working on developing 100 percent U.S. personalized content that will take into account local culture and trends,” Vaccas said. “We will also engage with our U.S. customers by adjusting our communication to their individual brand and product mix preferences.”

The growth maneuvers come amid a growing awareness and interest in kids’ fashions over the last four to five years. As Vaccas noted, the “mini-me” look has been taking off, and a flurry of designers recently launched children’s wear or expanded their children’s wear ranges. There’s also a trend among celebrity influencers to dress their children as “mini me’s” à la Kim Kardashian. As a result, “Children are getting more brand aware and there is an increase in the awareness by children in what they wear. Pop culture has inspired them to know what they want,” observed Ng.

Fashion experts at The Doneger Group noted that Mytheresa and Net-a-porter both launched children’s wear last year, as did Balenciaga, Balmain, Givenchy and Acne Studios. And Gucci expanded kids significantly.

Among the key brands on the web site are Tommy Hilfiger, Mayoral, Dolce & Gabbana, Gucci, Moncler, Armani, Kenzo, Balenciaga, Burberry, Givenchy, Moschino and Stella McCartney. Childrensalon has partnered with brands such as Fendi, Balmain and Alberta Ferretti on capsule collections.

It’s offers a large portfolio of brands with many that are relatively unknown in the U.S. and from countries such as Scandinavia, Sweden and Denmark. “They’re niche brands, like Mini Rodini from Sweden, that provide a real sense of discovery.” Mini Rodini, founded by Swedish illustrator Cassandra Rhodin, offers distinctively bright and quirky prints for girls and boys. Other niche brands are David Charles from the U.K., Patachou from Portugal, Lapin House from Greece, Junona from Bulgaria and Babidu from Spain.

Asked what the criteria is for a brand to be listed on the site, Ng replied, “It’s to provide as wide of a range as possible and it has to be good quality. Our buyers search for new brands to add to our list. They wouldn’t add it just for the sake of adding.”

The site has customer service 21 hours each day available in 27 different languages.

The business was founded by Sybil Harriman in Royal Tunbridge Wells, U.K. who loved to design clothing for her six children and dresses for friends and neighbors, and started sewing circles and taught local ladies the art of hand smocking. The pastime grew into a business, first in her house which had a busy workroom, and then in 1952, Harriman opened a shop called The Childrens Salon. She never originally intended to operate a full-fledged business. It just grew into one.

Today, the company is still family run, led by Harriman’s daughter, Michele Harriman-Smith and her husband George. They joined the business in 1972 and took the brand online in 1999 and established it as a global e-commerce destination. The company maintains a physical outlet at 9 High Street, Royal Tunbridge Wells, and an online outlet site, in addition to the regular web site.