At Tanger, Custom Design for the Masses

Each center’s architecture strives to emphasize the local flavor of each community. 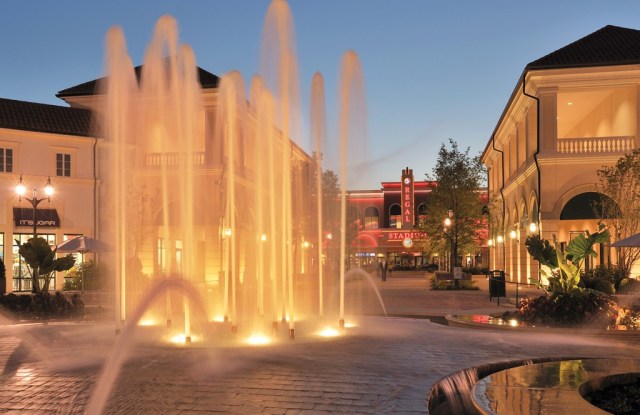 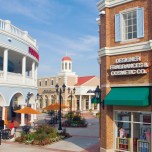 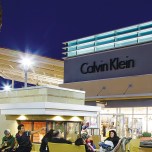 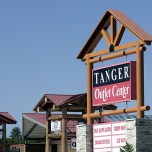 Tanger Outlets is not a big fan of cookie-cutter design.

Each of its 43 outlet centers in 26 states and Canada has a distinct personality. One center in Wisconsin Dells, Wis., uses heavy timber and local stone to convey the regional style. Tanger Outlets at National Harbor in Prince George’s County, Md., features landscaped promenades and open plazas that pay homage to Salubria farm, an historic plantation home located across the street. Meanwhile, a Tanger center under construction in Texas City, Tex., is divided into four streets, each inspired by a different thoroughfare in the downtown Galveston shopping district. And the Tanger in Charleston, S.C., is “sympathetic to the old, downtown Charleston,” said Ross Adams, president of Adams & Associates, who has designed projects for Tanger for 20 years.

It wasn’t always this way. Tanger’s support for architecture was dormant in the early years, when Stanley K. Tanger in 1981 opened his first outlet center.

“When I started, [Tanger] was doing very simple and not very attractive pre-engineered metal buildings,” Adams said. “I was able to get them into conventional construction. This was before Tanger was a real estate investment trust. As a REIT, they began building permanent buildings that they still own today.”

There were other innovations, as well. Tanger Outlets in the early Nineties had strip-center layouts, which only allowed shoppers to walk in one direction, then turn around and walk back.

“When my firm designed Orlando Premium Outlets for Chelsea Property Group in 1989, we did the first racetrack layout,” Adams said, referring to a design that allows customers to walk around a loop that circulates through the entire mall. “Now everybody’s doing racetrack layouts. Myrtle Beach was the first Tanger center we did as a racetrack layout.”

Like any construction project, each center has a budget and has to stick to it.

“There are variables on what the budget for the architecture is, depending on the land cost, site improvement costs and what the market will bear in terms of rent,” Adams explained. “Our job is to design something that looks good and feels good, but doesn’t cost a large amount. We’re accomplished at using common materials in uncommon ways.”

At Tanger’s Washington, Pa., center, Adams used wood siding on buildings, which is more commonly used in residential applications. A Kay Jewelers Outlet is located in a red barn-style building and sculptures of horses are found in plazas surrounded by foliage. The center has an equestrian feel, which is no coincidence, since there’s a horse farm across the street.

Frankie Campione, principal of Create Architecture Planning and Design, said, “What Tanger has allowed us to do is study the local vernacular and try to come up with a concept, something in the vicinity that’s important to the community. For example, the New England style of architecture was a natural for a center in Tilton, N.H.”

Campione has been adding more amenities to the outlet centers.

“What we’ve witnessed over the past 15 years [of working on retail projects] is that the shopper is more sophisticated,” he said. “The shopper seems to be a little more entitled. Everybody is used to more conveniences and comforts. What we’ve done at Tanger’s Galveston center is create an environment that has something for everybody. Rather than use metal benches, we introduced soft seating. We have Wi-Fi and coffee-table-height seating areas. We noticed mom wants to continue shopping, while dad wants to take a break. We’ve placed flat-screen TVs in the food court and built play areas where parents can watch their kids.”

Campione noted the amenities are necessary because the average outlet shopper spends four hours at the center, while the typical mall shopper spends just 45 minutes there.

“They don’t want to leave the center without conquering,” he said of outlet shoppers, always in search of a great deal.

Shoppers also might spend more time in the outlet centers because they are often located in resort areas and are therefore part of a vacation activity, as opposed to the local mall that a consumer visits frequently.

As the centers themselves have become more sophisticated and offer more amenities, the merchandise bears no resemblance to the “defective” lots of yesteryear. Outlets are no longer a dumping ground for irregulars or damaged goods.

With 90 percent of outlet retailers making product specifically for their outlet stores, Campione said there are no surprises with today’s merchandise.

“I remember my mom taking me to an outlet center and picking up a bunch of T-shirts. We got home and I tried them on, and they had three arm holes,” he said.

Food at outlet centers is evolving, just like every thing else.

“Food is discussed at every preliminary meeting,” Campione said. “Will we or won’t we include a food court. Galveston has a food court. In other centers we’re including fast casual restaurants adjacent to the center.”

He pointed out that outlet center shoppers in the past ended their shopping day around dinner time.

“We’ve been doing studies on how to extend their visit or how to capture them after work,” Campione said. “The closer the outlet centers are to an urban environment, the more important it is that the type of food is of a higher quality.”

The atmosphere of eateries must be appetizing. “At Galveston, we have communal table seating and outdoor seating that overlooks a pond,” he said.

“The last couple of Tanger centers I’ve worked on opted not to have a food court and go with in-line services instead,” said Adams. “Outlet centers are a destination and it’s multigenerational or a family. We try to find ways to offer something for everyone. The idea of a sports bar has been thrown out, but I’m not sure that fits with the image.”

Landscaping has always been important for the open-air properties. The center in Glendale, Ariz., has an outdoor fireplace and fountains, the Arches in Deer Park, N.Y., on Long Island, has a large fountain that turns into an ice skating rink in the winter. It also has an outdoor stage for free summer concerts.

Tanger is flexible about the size of its centers and will open smaller units if it likes a site.

“All the good sites have been gone for a long time,” Adams observed. “Sites are more difficult and challenged, in terms of topography as well as road access. Outlets are becoming more and more urban in their locations. The closer to urban hubs they are, the more the local jurisdictions have a say in terms of the development and architectural review.

“Additionally, we’ve had some push-back on the racetrack design,” he said. “They are inward-looking projects, [whereas now] city planners want everything oriented toward the street.”