With 50 percent of the leasing complete, it's clear the target customer for the Shops at Atlas Park, the city's first lifestyle center, is a Baby Boomer. 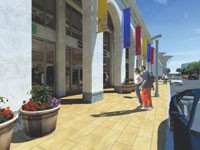 NEW YORK — With 50 percent of the leasing complete, it’s clear the target customer for the Shops at Atlas Park, the city’s first lifestyle center, is a Baby Boomer.

The four latest tenants to sign leases are Chico’s, White House|Black Market and Gymboree, along with the regional restaurant concept Shiro’s of Japan. They will join Regal Cinemas, Jos. A. Bank, Claire’s, Coldwater Creek, The Bombay Company and Aerosoles when the center, located in Glendale, Queens, opens in the spring.

Retailers are expected to realize sales of about $750 to $900 a square foot, said Damon Hemmerdinger, the project’s development director.

“We’re speaking to a number of coed retailers,” he said, referring to brands such as Banana Republic. “We’re also approaching a deal with a shoe store.”

If retail concepts aimed at younger consumers are conspicuously missing, it’s by design. Hemmerdinger said the center is too small to cater to both adult women and juniors.

“There is a second phase, which will probably include a more youthful customer,” he said. “It will be adjacent to Atlas Park, which occupies about half of the available land.”

With 60 stores and eateries, including the California Pizza Kitchen and a food market modeled after the one at Grand Central Terminal, shopping at the 300,000-square-foot, open-air center is meant to be a stress-free experience. Hemmerdinger wanted the market because “people shop for food several times a week,” he said.

The Shops at Atlas Park is being built on a 12-acre tract of land. Generous open-space features include fountains and a reflecting pool. The central feature is a green in the middle of the property, surrounded by clusters of whitewashed buildings. There also will be an outdoor cafe pavilion.

“The big idea behind the project is the public space in the middle,” said Hemmerdinger. “The customer is an urban dweller and has less opportunity to be outdoors.”

Customers in the trading area, which includes Forest Hills, Rego Park and Kew Gardens, would seem to have many shopping opportunities, but Hemmerdinger maintained the area is understored.

Austin Street, Forest Hills’ main shopping drag, has seen an influx of national tenants in recent years such as Ann Taylor, Banana Republic, Gap, Barnes & Noble and Starbucks, and Hemmerdinger is talking to several retailers with stores on Austin Street. “We’re delivering significantly more parking and lower occupancy costs than Austin Street,” he said. “Austin Street is a very important shopping street with banks, pharmacies, delis, apparel and shoes. We’re a small specialty center that’s targeting a particular market. There may be overlap between Austin Street and our tenants.

“Our customers drive to Nassau County to shop and go to large malls like the Roosevelt Field Mall and Walt Whitman Mall,” Hemmerdinger continued. “This is the intervening opportunity. It’s within a couple of miles of their house rather than a 40-minute drive in traffic.”

The Shops at Atlas Park is being developed by Atco Properties & Management on land owned by the Hemmerdinger family. “We live in Queens,” said Hemmerdinger. “We have a very finely tuned sense of the customer we’re going after.”