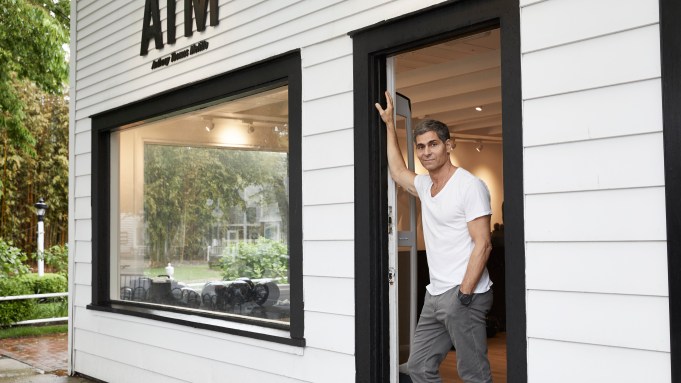 “This is not a stock photo,” said Anthony Thomas Melillo, describing the large photograph of the rugged Lost Coast in northern California, which will soon be hanging in his new shop opening today at 20 Newtown Lane in East Hampton, N.Y.

“I wouldn’t necessarily put up a picture of my clothing campaign in my store.”

Something so conventional doesn’t sit right with Melillo. He’s got his own perspective on retail and it centers on making the products and presentation “personal,” creating a local appeal for the community, and adding aspects of the unexpected, like the photo, taken by his art director Noah Stone. It’s a statement for the back wall that will draw one deeper into the 1,200-square-foot shop, called ATM Anthony Thomas Melillo.

“You can’t just consider this a store with racks of clothing,” Melillo said. He prefers to call it “a retail concept.”

The East Hampton store reflects the look of the Bleecker Street unit. Both are decorated in Melillo’s favorite black matte paint from Farrow & Ball and with white oak floors. There are black metal framed racks powder-coated so they aren’t scratched by the hangers and with concrete bases for display. There is also some Melillo-designed furniture for sale in both stores, including a huge sofa in black recycled denim. In East Hampton, Melillo created an L-shaped built-in banquette that’s not for sale and there’s a large lattice-like wooden installation floating on the rear wall that serves as a focal point for the sneakers. A staggered lineup of 30 mannequins runs down the center of the space, showcasing best-selling T-shirts and seasonal looks.

Results from the ATM pop-up shop in East Hampton last summer motivated Melillo to open the permanent shop there, which he can keep close tabs on. Last year he bought a house in Amagansett, N.Y., the town just east of East Hampton.

“The beach is home for me and my family. I really love the cozy, local feeling,” Melillo said. “I want to make sure the store is part of the community, just like Bostwick’s is for an early Sunday dinner with the family.”