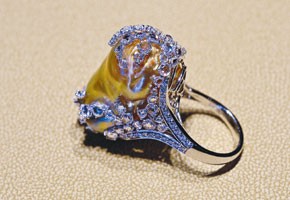 Avakian is getting the Beverly Hills touch.

“Obviously, you are on the most glamorous street in the U.S. with Rodeo Drive in front of you,” said Haig Avakian, who followed his father and Avakian’s head designer Edmond’s footsteps to work at the nearly 40-year-old family-owned Avakian Group. “In general, the [European and Middle Eastern] clients that we have when they are out here, 80 percent of them stay at the Beverly Wilshire.”

The company also operates a multibrand store in London and in Geneva called Piantelli.

“We like to keep the style of our store minimalist, clean and cutting-edge,” said Avakian.

“I think that L.A. as a market is quite underdeveloped,” he said. “A lot of our clientele have already bought these classic pieces. They want something different.”

The Beverly Hills store’s merchandise is evenly split between pieces from Avakian’s 12 collections and one-of-a-kind items, according to store manager Raymond Dominguez. Tzarina is the opening price point collection with rings, pendants and earrings in 18-karat rose gold, white gold and yellow gold starting at $2,500 to $3,000. The Links collection, launched last year, is the store’s most expensive, going up to $250,000 for a necklace and featuring chains of various diamond and sapphire hues in 18-karat yellow gold, white gold and rose gold.

Examples of one-of-a-kind items at the store include a green diamond crocodile bracelet for $68,000 and a $34,000 lion’s head pendant in black onyx and white diamond. Dominguez said that animal motifs have been especially popular early on with the store’s customers, as has Avakian’s Riviera collection marked by interchangeable chandelierlike components dripping with semiprecious stones in 18-karat yellow gold, white gold, rose gold and black gold.

Although Avakian wouldn’t discuss the Avakian Group’s annual revenues, he said the “U.S. comprises about 5 percent of our total global turnover.” He estimates that figure could rise to 20 percent over the next three years. In its first-year of business, he projected the Beverly Hills store would generate sales of $5 million to $7 million.

“Moscow is the strongest market, but I hope Beverly Hills will be better,” Avakian said.

He anticipates putting stores in cities such as Las Vegas, Aspen, Colo., Dallas, New York, Miami and Chicago in the next few years. “We have many plans,” said Avakian. “It hasn’t been easy because we are completely self-financed, but we feel that we have a lot of creativity and we have a lot more designs coming out.”