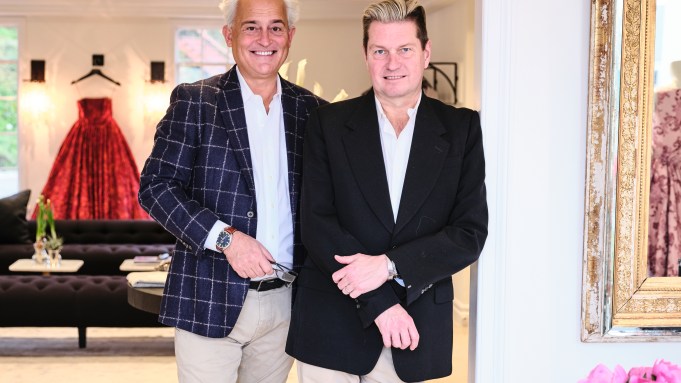 Badgley Mischka has two new homes in Los Angeles — one retail and one residential. Designers Mark Badgley and James Mischka have taken over the Hollywood Regency-style building at 8619 Sunset Boulevard in West Hollywood’s Sunset Plaza that housed the BCBG Max Azria and Hervé Léger showrooms for 15 years, and also decided to make L.A. their permanent residence.

The 2,000-square-foot store officially opens on Thursday, while the designers decided to switch coasts back in September.

“Our parent company [Titan Industries] is here, we have about a dozen licensees here, our families are here, and now our store, so it made sense. It’s a fun idea,” Badgley said. “It has already changed our outlook with fun new insights and new ways of approaching things,” he said of the move.

Badgley Mischka had a store on Rodeo Drive for years that the company shuttered in 2016 before moving into a temporary spot in Sunset Plaza, a favorite shopping and dining destination for locals that is also the longtime home of Oliver Peoples and H. Lorenzo, among other retailers. The company also has six apparel stores and 15 shoe stores in China. It plans to open 16 more apparel stores and 12 more shoe stores there in 2019.

“Everything in the world is now available online, so we view stores as a pleasant experience where our customers can be taken care of and coddled,” Mischka said.

“As much as I love Rodeo Drive, it’s not always where local women go to shop. It can be intimidating. You’re signing up for a whole different thing on Rodeo. A lot of our customers have their comfort zone here, and I feel very at home here,” he said of Sunset Plaza.

Badgley Mischka’s former store happened to be in the space that was featured in “Pretty Woman” as the snooty shop that refused service to Julia Roberts’s character, Vivian. Like other tourist attractions, it was a stop on many sightseeing tours. “People would often come in and say, ‘Do you work on commission? Big mistake. Huge,'” said Mischka of Roberts’ famous line in the movie.

While the brand’s offerings have expanded to include 25 categories of apparel, accessories and home, “there’s a thread of glamour to it all,” Badgley said. “We never wanted to be everything to everyone. Glamour is what we have to offer whether it’s a gown or a teacup. We’re not about casual dressed-down Fridays.”

The first floor of the shop showcases ready-to-wear and some runway pieces, while upstairs houses a VIP showroom. The men said they’ve always loved the building, which is a stand-alone structure that resembles a house. “It really feels like our own domain,” Mischka said.

They still spend one week every month in New York, though many things have changed, such as their move from Seventh Avenue. “With the industry changing minute by minute, there are no rules anymore. We do what makes sense for our company,” Mischka said.

Badgley said they’ve managed to stay in business for 30 years by embracing change. “It’s a combination of two extremes — you stick to what you do, and at the same time embrace the subtle changes and have to be flexible and listen to your customer. It’s still an old-fashioned business and it’s still a people-oriented business. In this day and age sometimes we forget that. We’re still creating memories for people, and they still want that human touch.”