Nicolas Ghesquière has launched Balenciaga's first store here, an expansive, stylized space in a location that he said fits the brand. 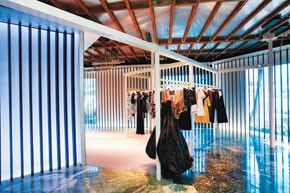 LOS ANGELES — Nicolas Ghesquière has launched Balenciaga’s first store here, an expansive, stylized space in a location that he said fits the brand.

The 5,000-square-foot freestanding store across from the Pacific Design Center on Melrose Avenue in West Hollywood is the only Balenciaga boutique in the U.S outside Manhattan. The other retail units are in London, Paris, Milan and Hong Kong.

“I fell in love with the building,” Ghesquière said. “I always drove by it and always thought it would be a perfect place for a Balenciaga store. The fact that it was across from a landmark, the PDC, made it also very attractive. I like to be on a place where cars drive by. This notion of being visible from a car felt very Los Angeles for me.”

Known for cutting-edge designs and celebrity fans like Nicole Kidman, Kate Moss and Jennifer Connelly — who is featured in Balenciaga ad campaigns — the Gucci Group-owned brand’s debut has been a highly anticipated event here and the culmination of a process that took about three years.

Each of Balenciaga’s stores has a distinct look and feel, a standard that creative director Ghesquière and his store design partner, French artist Dominique Gonzalez-Foerster, are determined to achieve. The elaborately designed, two-floor West Hollywood space looks like something out of a high-glamour, futuristic film.

Blue is a signature color, part of an elaborate lighting scheme that changes the look of the store throughout the day as the sun moves. There are shutter-like blue slats that run floor-to-ceiling along the walls.

“We have wanted to make every store different,” Ghesquière said. “In the case of Los Angeles, we wanted the experience to be a cross between organic and science fiction. We tried to create an experience that was cohesive with the city, or at least with our vision of the city.

“The light in Los Angeles is very specific and we worked very hard on creating a lighting that evolves as the day goes by,” he continued. “Dominique and I have collaborated for several years with lighting designer Benoit Lalloz.”

A modern black lava rock garden spans the area between the sidewalk and the store’s entrance, mirrors line the walls and LED lighting fixtures are installed throughout. There are custom-made display cases that open with touch-activated mechanisms and silver leaf lines some walls and display cases. Three shades of marble cover the floor in a geometric pattern and flat-screen displays are set within the store’s walls.

There are plenty of opulent touches: a huge private dressing room with a bathroom, a minibar for celebrity clients, bathrooms concealed by a sliding door and dressing rooms for men and women that feature seating designed with each gender in mind. The VIP dressing room has its own point of sale setup.

Cash registers are off the sales floor and surrounded by silver consoles.

The collection housed within the store is wide-ranging as well, from $375 sunglasses and $3,000 handbags to apparel and gowns that sell for as much as $70,000.

Offices and a stockroom take up the second floor of the building, a former tile manufacturing space that took two years to renovate. After putting in all that work, don’t expect Ghesquière and company to move out anytime soon: Balenciaga has a 10-year lease on a section of Melrose Avenue property that is increasingly popular. Rents in the district are in the range of $8 per square foot per month, real estate brokers said.

“We are in a strategy of expansion, without a doubt, but the right space will always be what drives us to open in a certain market,” Ghesquière said.