Bally is starting to refurbish its flagship stores, and the company unveiled the new, no-frills look at its London location last week. 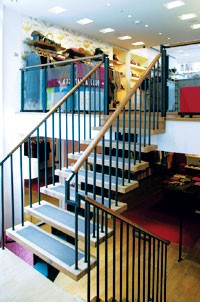 LONDON — Bally is putting on a fresh face.

The Switzerland-based accessories and fashion brand has begun refurbishing its flagships in major cities, giving them a brighter, more streamlined look. The 3,500-square-foot London store on Bond Street, which reopened last week, was one of the first to undergo a transformation.

“We wanted a better backdrop and showcase for our products, which continue to improve,” said Marco Franchini, chairman and chief executive of Bally, who has been guiding the company through its turnaround under owners Texas Pacific Group.

“The general concept is to create stores that are calm and friendly, using a lot of natural materials. …it was important for the spaces to be bright, which is why you see a lot of white here,” added Franchini.

The no-frills environment is meant to place the merchandise at center stage. Display shelves and tables are broad and open, inviting customers to handle the bags, boots and shoes.

The floors are made from Spanish white limestone, while the white walls are fashioned from stone and have a corrugated texture. The staircase, shelves and fixtures are made from dark walnut and chestnut wood. Soft, chocolate-colored leather sofas and benches are scattered around the store, while gray carpets cover parts of the floor.

“We didn’t have an enormous budget for the refurbishment, and we think we’ve used a lot of fantasy and creativity to make the stores work,” said Franchini, adding that Bally spent about $237 (300 Swiss Francs) per square foot refurbishing the stores.

In addition to Hong Kong, which has already reopened, Bally is redoing its stores in Beverly Hills, Geneva, Milan, Paris and New York. The company will later move on to units in smaller cities around the world. Bally operates 104 owned and 108 franchised stores worldwide.

The opening parties for each major store will be held in conjunction with the Rainforest Foundation. As reported, Bally has designed a limited-edition Nature Bag made from leaf-printed satin with a beechwood handle. One hundred bags will be sold at each store opening, and profits from the bags will go to the Rainforest Foundation, the non-profit human rights and environmental organization founded by Trudie Styler and Sting in 1989.

Meanwhile, Franchini added that Bally is on track to break even this year and is poised to report a positive EBIT, or earnings before interest and taxes for the first time since TPG purchased the business in 1999. “We’re on safe ground now, and we can really start making long-term plans for growth,” Franchini said, adding that sales this year should reach $366 million (300 million euros).

He added that Bally is currently testing an eyewear license in Japan with a company called Charmant. If the partnership is successful, Bally will come out with a line of sunglasses and optical frames in a year’s time, he said. In addition, Bally is looking to relaunch its watch business and is talking to potential licensees. The company will likely unveil a new watch collection at the start of 2006, Franchini said.

“We’re not rushing into anything. It was important for us to get our core product right, and then spread out to other categories and wider audiences,” he said.