Located on the corner between Via Montenapoleone and Via Manzoni, the store presents a new blueprint by Casper Mueller Kneer Architects and covers 6,048 square feet.

MILAN — The new Bally flagship in Milan is hard to miss, located on the corner of two of Milan’s main streets — luxury haven Via Montenapoleone and the busy, high-end Via Manzoni, across from the Armani Hotel and Emporio Armani megastore.

The three-level, 6,048-square-foot store, called Bally Haus, opened to the public on Tuesday and will be officially unveiled in October. It is an indication of the importance of the Italian market for the brand and it emphasizes its Swiss heritage, while nodding to its Italian and Milanese influences. 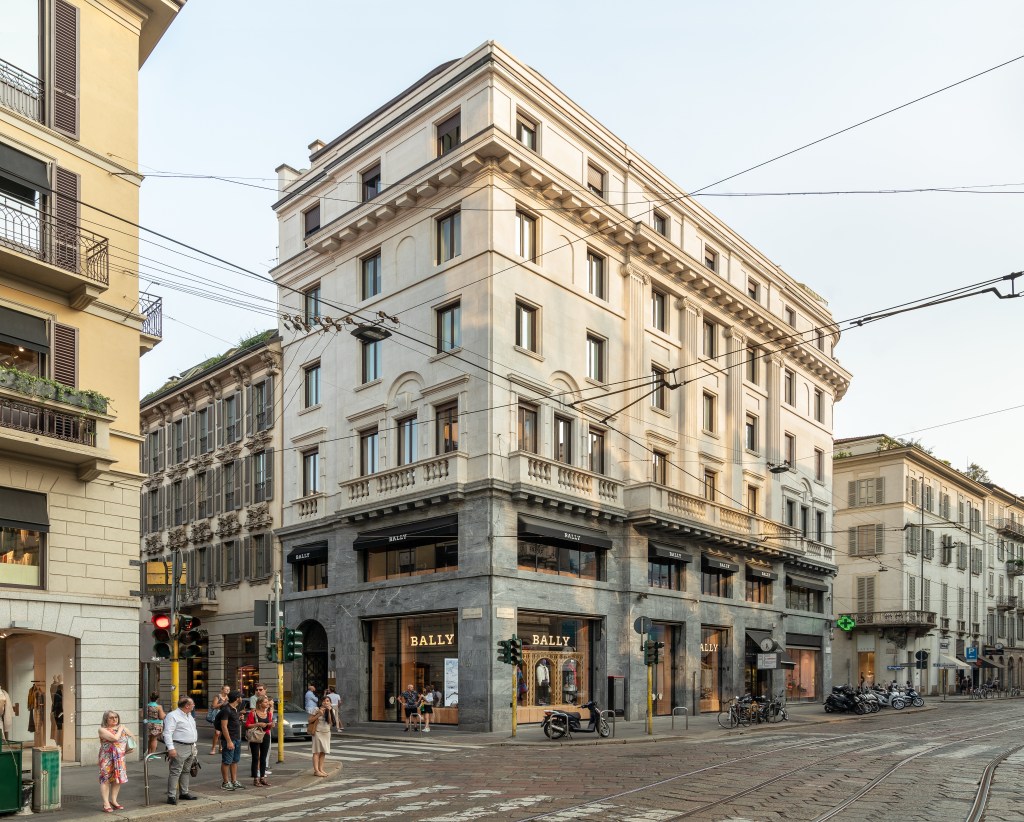 Designed by Casper Mueller Kneer Architects, the banner’s blueprint replaces a previous one by David Chipperfield and reflects the label’s shift from aspirational to entry luxury.

“The unveiling of Bally’s flagship in Milan is a celebration of our brand identity,” said Nicolas Girotto, the company’s chief executive officer. “In opening the doors to this store, we want to create a destination for cultural engagement, where customers can experience Bally’s complete lifestyle offering.”

In addition to its women’s and men’s products, the unit will offer exclusive Bally Haus capsules and lifestyle merchandise, including stationery, tote bags and games, and also stage cultural events.

As reported in May, Girotto was promoted to the role from his previous one as chief operations officer, succeeding Frédéric de Narp, who is now vice chairman of Bally.

This flagship — along with a presence in 97 multibrand shops — creates 98 doors in the Italian market. “This is a key moment for us,” Girotto told WWD in July. There has been an increased emphasis on Milan and the Caslano, Switzerland-based headquarters after de Narp moved Bally from London back to the European continent in 2017. Production is split between Caslano and, for leather goods, in Scandicci, near Florence.

Retail accounts for more than half of group sales, which Girotto did not disclose, and the men’s division represents 60 percent of the total. By category, leather goods account for more than 50 percent of sales.

Travertine and clay are two of the main materials. The entrance is reminiscent of an artisan-laid Milanese courtyard, and its composition of the design on the floor was inspired by Swiss artist Paul Klee’s pointillism and abstract geometries. 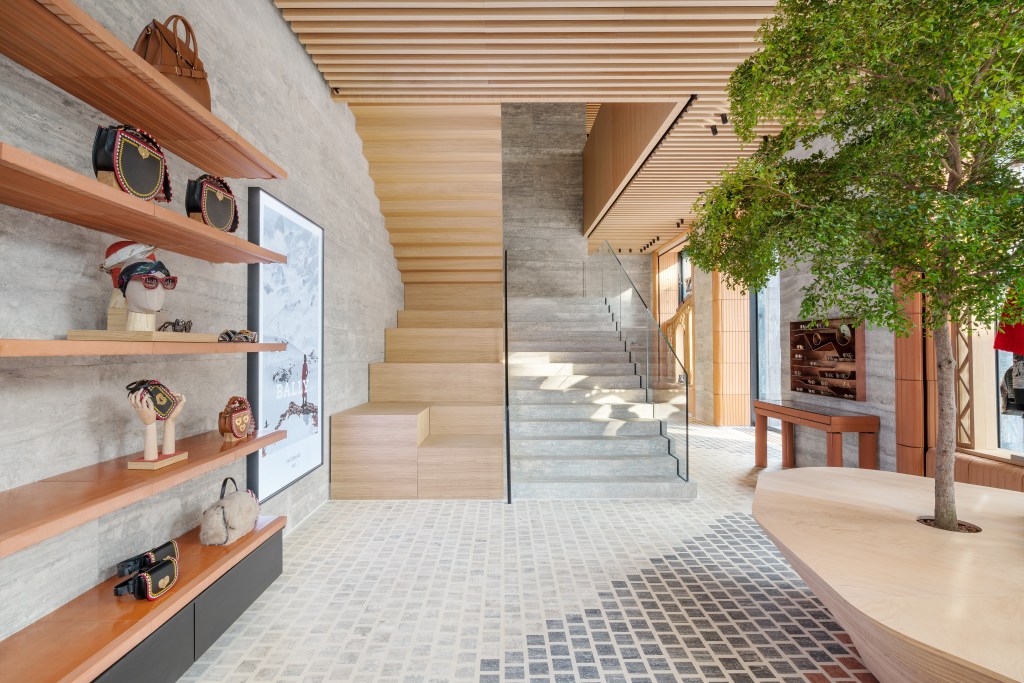 The ground floor of the new Bally flagship in Milan.  courtesy image

Men’s and women’s accessories, including eyewear produced by Marcolin, are available on the ground floor, where a large beechwood table display in the center of the space stands out, inspired by a shoe-last. A tall Bucida buceras, known as the bullet tree or the black olive tree, adds yet another natural touch to the location.

The staircases emphasize the full volume of the cavernous space, reaching almost 30 feet at its highest point.

Moving onto the first level through a grand glass and travertine staircase, customers reach the men’s floor, which has a warmer and more private concept, with its lower ceilings. It is reminiscent of a Swiss cabin and it is marked by European oak and handwoven carpets inspired by the shape of an archival shoe design. 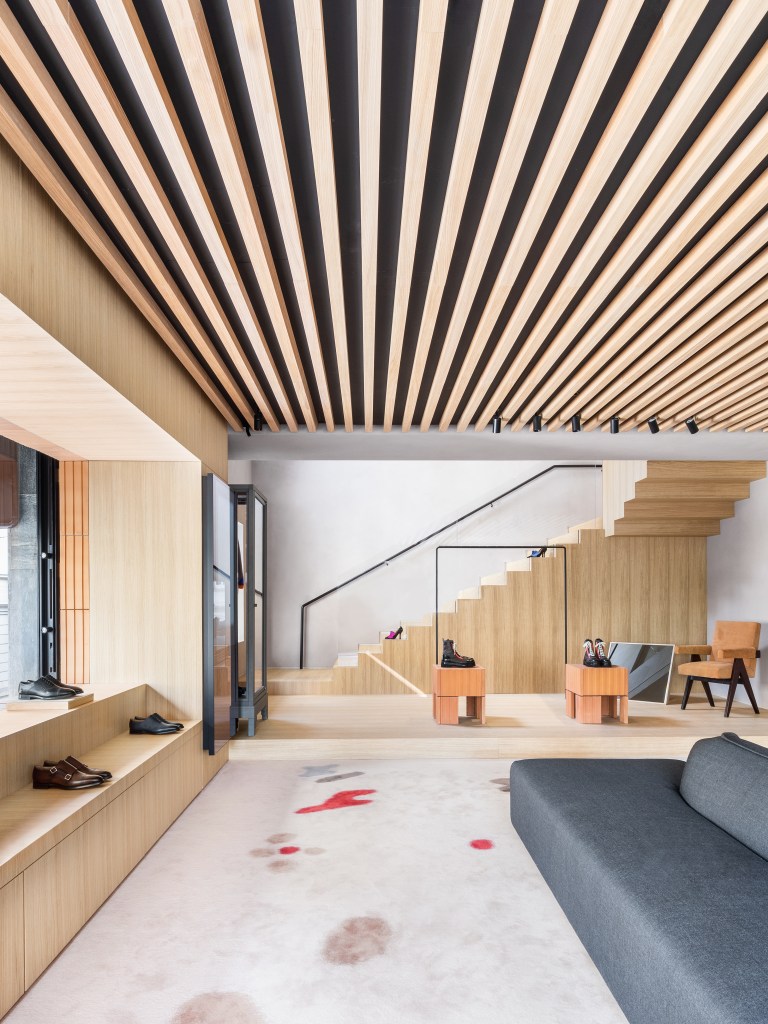 The men’s floor on the first level.  courtesy image

This floor features herringbone parquet flooring and Bally has maintained the location’s original windows looking down on the streets below. 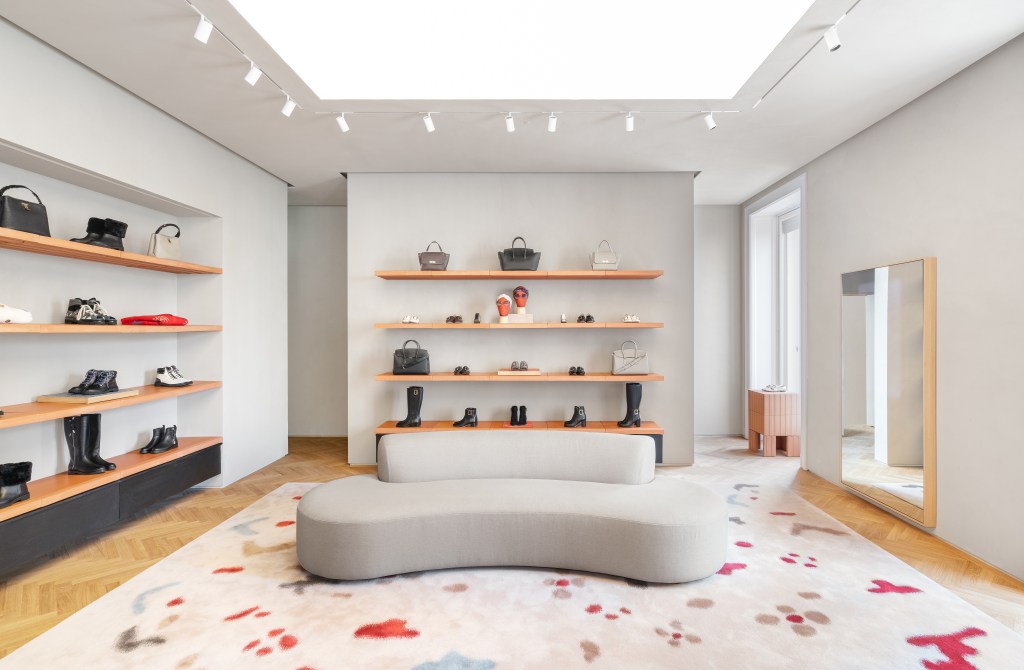 The women’s floor at the store.  courtesy image

Clay furniture is used for display in natural, earthy tones alongside fine stucco rendered walls and blush leather accents. Comfortable yet sophisticated sofas contribute to the residential character of the store.

Large illuminated windows pay homage to the historic storefronts seen in photographs and the four expansive windows on the ground floor ease communication between the interior and the street.

LED video panels on each floor showcase the latest branded digital content while in-store iPads allow customers to explore omnichannel benefits. This includes the introduction of the “endless aisle,” giving customers access to browse and buy from the full online inventory, with items delivered in the store or direct to their door.

Bally’s direct-to-consumer sales represent 65 percent of the total, composed of brick-and-mortar and e-tail.

As reported, the company has delivered a strong financial performance with a 35 percent operating profit increase in 2018, matched by operational progress, which has seen a visible demographic shift toward a younger, more affluent customer.

Last year, Chinese textile and apparel giant Shandong Ruyi Group said it would take a majority stake in Bally. Shandong also controls SMCP and Hong Kong’s Trinity Group, and has said it wants to transform Bally into a global force in fashion and apparel.

In July, in his first interview in his new role, Girotto said that as part of a comprehensive sustainability and social responsibility strategy, the Swiss luxury brand was launching the Peak Outlook initiative to preserve the mountain environments and their communities, and the first clean-up expedition targets Mount Everest.