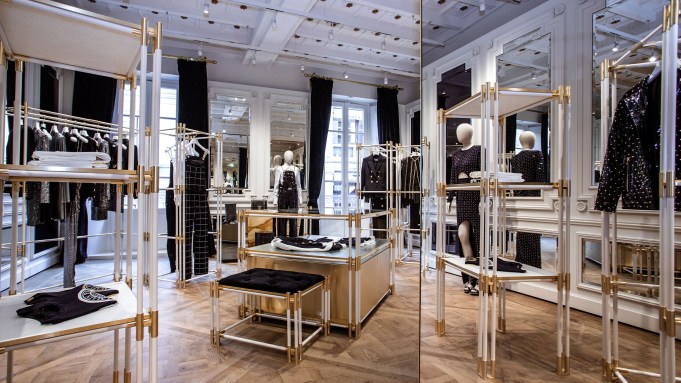 MILAN — The “Balmain army” of friends and fans will have the opportunity to see creative director Olivier Rousteing’s first concept store unveiled in Milan today —and more, with an innovative virtual reality tour of the inspiration behind his designs as part of the Wonderlabs technology and communications project.

In an exclusive interview, Rousteing emphasized the need for the store to reflect his own taste as much as Balmain’s “tradition and elegance,” while adding a “futuristic and modern touch” to the unit.

Located on Milan’s luxury shopping street Via Montenapoleone 27D, the flagship covers 3,024 square feet over two floors, carrying the brand’s women’s and accessories collections. It is the first Balmain flagship in Italy and the brand’s second in Europe. Quietly opened during the weekend, the official presentation of the store kicks off the international furniture and design show Salone del Mobile, running April 17 to 22. “Salone is one of the biggest platforms in the world, and there is no doubt it’s unique in terms of creativity and design,” said Rousteing.

“We chose to open in Milan the weekend before the Salone because we knew the store would have immediate visibility” and help drive sales, said chief executive officer Massimo Piombini.

Rousteing, who worked with three young architects from Paris’ Studio AMV — Anna Philippou, Marie-Charlotte Prosperi-Fouchard and Victoire Guerlay — re-created a hôtel particulier for the store, focusing on the Parisian roots of the brand. “Every room feels like home,” said the designer.

Black-and-white marble; chandeliers; a mirrored grand staircase; oak wood; a winter garden, which includes white roses — a Balmain symbol, and a game room are some of the characteristic elements of the unit, mainly in cream tones.

Accessories will be displayed on the ground floor, presented “almost as sculptures,” said Rousteing.

Determined to be inclusive, dynamic and contemporary, the designer developed a unique virtual reality experience “showing fashion in a different way, and using the past for the future,” he mused, inviting visitors to join in on a dream-like immersive journey tracking the creative steps behind his collections. The VR experience has visitors passing through an empty room into a Baroque castle, which then burns, and into a high cathedral or the roofs of Paris, for example. “It’s as if you enter in my brain and thoughts,” he added.

Called My City of Lights, this is the first of a series of virtual reality adventures part of Balmain’s new Wonderlabs marketing strategy focusing on entertainment and technology planned by the house and unveiled at the store, available for a few weeks in Milan, before traveling to other banners around the world. The strategy reflects Balmain’s drive to become a leader in technology in the fashion industry and to redefine the retail experience. “Come and discover, this is an innovative and surprising story that will become more complete every time — it’s a new way of writing a new chapter,” said Rousteing.

Referring to the new store concept, Piombini said it was “very important for us, for Olivier, to be at the center of the whole strategy of the brand. He is not only a designer, he is a photographer of the ads, an eclectic talent despite the young age, and the visibility is fundamental as Balmain’s size is still small.”

For example, explained the executive, he would “not consider opening 150 or 200 stores in five years” for a brand such as Balmain, as he is aiming for more visibility and to set up a store only where it is needed.

“We are strengthening our distribution, both at wholesale, which will remain the most important part of the business, and at retail, with the opening of five or six important locations in 2018,” he said.

The rollout this year includes a second store in Paris and a second in Beijing by the end of the year; a unit in Miami and one in Las Vegas in October, and the third venue in Hong Kong, slated for the end of August or September. In 2017, a store opened in Los Angeles. There are a total of 12 directly operated Balmain stores globally. The U.S. is the brand’s first market, followed by Italy.

“We don’t need huge surfaces, but it’s very important to be in that position on the street,” said Piombini. “The moment of the huge stores has passed.”

Balmain can rely on a local customer base because ready-to-wear is the brand’s core business, which “creates loyalty — accessories are more skewed toward tourists,” he contended.

The brand is growing at a double-digit pace, said Piombini, who expects 35 to 40 percent growth in 2018. Sales last year rose 13.2 percent to 154 million euros, compared with 136 million euros in 2016, but the executive said the company was focused on investing and setting the foundations for growth, rebuilding its management team, building the American and European markets and reaching out to Asia.

Rousteing, who lived in Milan in his youth and speaks excellent Italian, said the city is in his heart. He candidly expressed his happiness at designing Balmain for seven years now. “It’s been my life and the store reflects myself and the brand, naturally and coherently.”

The designer said consumers today want to be “entertained at a new level. The access to music, art, fashion and travels is so fast, all in one click, and we are living a real fashion revolution, it’s a new era. It’s very important to aim at the new world without forgetting Balmain’s tradition and luxury, but it must be presented in a different way.”

An equally enthusiastic Piombini emphasized the virtual reality experience as a new tool of communication, to generate engagement and to attract the younger generation. “You enter Balmain through a door that was never used by others [in fashion]. Olivier and I think communication should be based on the idea of entertaining customers in the most authentic and least invasive way.”

He claimed that, with all the market changes and evolution, the traditional models of communication are suffering. “It’s a work in progress, but we are really excited about it,” he said, banking on a new experience that he believes will be remembered.

“Olivier is unique on his own and his approach to life is unique. He talks about inclusion, and has 5 million followers on Instagram. He shows you how he goes on vacation, when he goes to the gym, his friends — it’s atypical for a creative director, whose private life is generally private, but he set up his own personal communication early on. It’s a given for us, but it’s not easy, and he and the brand have become interesting for people at the highest level of other industries,” the ceo said.

For 2018, strategies include the development of Balmain’s accessories business, ranging from bags to men’s and women’s shoes, which Piombini believes is key for growth. A successful accessories business could be Balmain’s big turning point, helping to drive growth in Asia, which is very much accessories-oriented, he said. Proving just how relevant this project is, a Balmain Italia manufacturing plant will open at the end of the year in Scandicci, near Florence — a storied production hub for the category.

Piombini admitted the brand was very expensive, also in light of its audience and potential customers. Balmain counts 8 million followers on Instagram, with a very young average age “not in line with the price positioning. The issue is to bridge the audience and the product and convert this in business,” said Piombini. “Without diluting the brand, we want to flank product categories that can democratize the average price.”

This does not mean licenses or product extensions, as the executive believes in first focusing on the brand’s core business “with a strong and clear message to avoid dilution.”

Piombini cited the looks designed by Rousteing for Victoria’s Secret, unveiled in November at the lingerie brand’s fashion show in Shanghai and available for one week, which were all sold out, or the capsule collection of lipsticks for L’Oréal Paris, which was available for two months. “These products flew off the shelves,” said Piombini, who favors “more strategic collaborations with visibility and that last less.” These tie-ups prove Rousteing’s “atypical talent,” since he is equally successful creating costumes for a ballet performance at the Paris Opera last year, said Piombini.

“It’s a small company with such growth potential and big opportunities,” said the ceo, emphasizing the relationship with Rousteing, whom he described as “super friendly, enthusiastic and humble, so different from the stereotype of other creative directors. We respect each other and don’t interfere in one another’s fields. I am 57 and have 35 years of career behind me; I’ve seen a lot but I feel young again.”